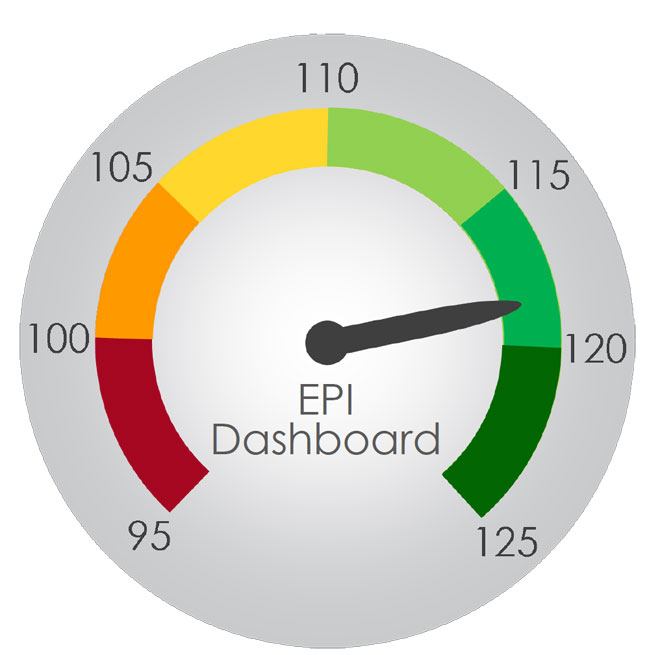 The Lafayette Economic Performance Index, which tracks the strength of the local economy, registered 118 for September 2013, up more than 1 percent compared to September 2012. The index at the end of the third quarter showed a 0.8 percent increase from the second quarter; it's important to note that the index has not dropped below the 12-month moving average at any time during the last eight months.

What the index reveals is that Lafayette's economy has been steadily growing since 2010, increasing 14 percent since hitting a decade low in August 2009. Opportunities created by this economic prosperity have not gone unnoticed. In October, Newpark Resources announced it was investing more than $41 million on a 50,000-square-foot manufacturing expansion and creating 35 new jobs while retaining 55 existing jobs in Carencro. It comes as no surprise that Lafayette was listed as the third best mid-sized city for Manufacturing Employment Leaders in the U.S., according to the Bureau of Labor Statistics.

Like any index, the EPI combines multiple data points into a single score that can be tracked and compared over time. This particular index monitors 15,000 data points and 15 local statistics that together illustrate a unified story about how the Lafayette economy is performing. The index is the most accurate reflection of the economy, because it is seasonally and inflation adjusted, meaning movement is based on actual changes, not those caused by changes in periodic variation or time. The EPI is also retroactively adjusted to allow for a more accurate comparison between present and past performance of the economy. This allows for an "apples to apples" comparison of where we are and where we have been.

Since experiencing a short-lived dip in fourth quarter 2012, the EPI has regained upward momentum, as seen in Figure 1. Currently, the EPI is 2 percent higher than the 12-month moving average, signaling a very strong year-to-date. The index's position relative to the 12-month moving average - in our case it has been above for 10 of the past 13 months - gives an indication of how the overall economy is fairing.

Analyzing all 15 indicators as a whole shows that they are performing stronger than last year. When all three categories of indicators - leading, current, and lagging - move in the same upward direction, it means that the local economy is on track for continued growth and prosperity. This sustained progress is lagniappe for the local economy, which already had one of the best years ever in 2012.

Leading indicators are those that change three to six months prior to the overall economy showing signs of adjustment. In September, half of the six leading indicators saw improvements over last year while the other half displayed negligible decreases. This marks another encouraging quarter for the local economy.

Lafayette Average Weekly Initial Unemployment Insurance Claims increased slightly from 80 to 86 from August to September and are up from 81 in September 2012. Since weekly claims this year have averaged lower than any year since 2008, there should be no concern. The overall trend is still declining and goo 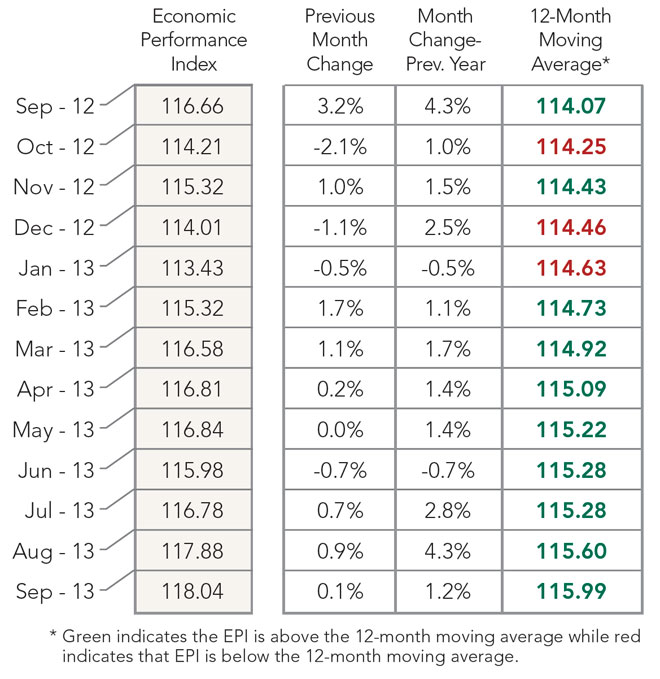 The Lafayette Stock Index has continued its upward trend with a score of 238.2 in September. This is 7.4 percent higher than September of last year. After hitting a 10-year low in February 2009, the index has grown 101 percent to achieve a decade-high in September of this year. It will be exciting to see how the fourth quarter index responds to the addition of Frank's International, which went public in August.

Residential building permits in Lafayette and unincorporated areas of the parish saw a dip from 69 permits in September 2012 to 64 in September this year, continuing a moderate performance. Much of the residential growth in the parish has been attributed to home construction in neighboring municipalities, which are not reflected in the index. Given the vitality of the overall economy, local housing conditions should continue to improve for all of Lafayette Parish as a whole.

Current indicators - those that change at the same time that the overall economy shows signs of adjustment - continue to show strength in the second quarter.

Retail Sales is one of the top economic indicators because it indicates the amount of consumer spending and confidence present in a community. September saw slightly less than $510 million in sales; and three-fourths of the way through the year, Lafayette retailers had more than $4.4 billion in sales. This is a 5.2 percent increase over the third quarter of 2012. In fact, Lafayette has a better chance of reaching $6 billion in total sales this year than it ever has before. This would be the first time in the city's history that this has happened. Seasonally adjusted sales for each month since November 2012 have been above the 12-month moving average, signaling the continued upward trend in retail sales along with a healthy consumer confidence. Lafayette Parish Hotel/Motel Receipts also continue to outperform 2012 numbers. September receipts totaled $6.2 million, besting 2012 by 2.3 percent. Year-to-date, Hotel/Motel Receipts are 1.6 percent higher than the previous year. The performance of Retail Sales and Hotel/Motel Receipts indicates how strong the Lafayette hospitality market truly is, especially since these numbers are adjusted for inflation and seasonality. 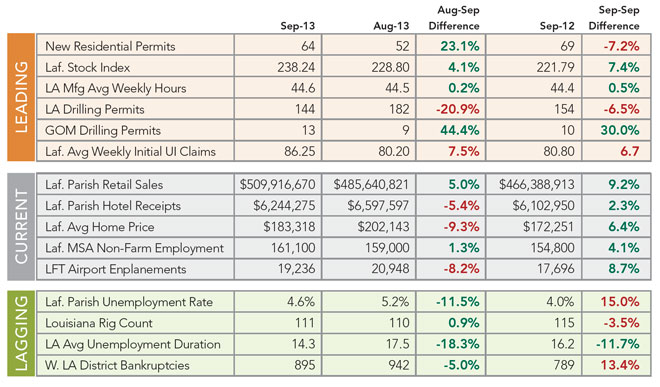 Non-Farm Employment in the Lafayette MSA is among the strongest indicators with more than 159,000 jobs. Nearly 15,000 jobs have been added since the end of the recession. Lafayette has increased jobs by 10.4 percent, while the national economy has added jobs at a slower rate of 7.2 percent since the recession. The third quarter saw the highest employment level ever in the Lafayette MSA. As long as the indicators keep improving, look for local businesses to continue adding jobs.

Other current indicators such as Lafayette Regional Airport Enplanements and Average Home Sale Prices continue to show positive momentum. Second quarter enplanements marked the highest quarter ever. Monthly enplanements in the third quarter kept the momentum going and posted the second best quarter on record. That is great news for the airport and the planned passenger terminal expansion.

The Average Home Sale Price of single family homes in Lafayette is also performing well, reflecting strong performances by other indicators. Not only did prices beat the 12-month moving average for the entire quarter, but August saw the largest average sales price since November 2010 at $201,143. Despite some month-to-month volatility, the average sales price has been creeping up since the beginning of 2012, and the 12-month moving average has been climbing since late 2012, reinforcing the upward trend.

The third quarter saw the lagging indicators - those changing three to six months after the overall economy adjusts - continuing to align themselves with the healthy leading and current indicators. 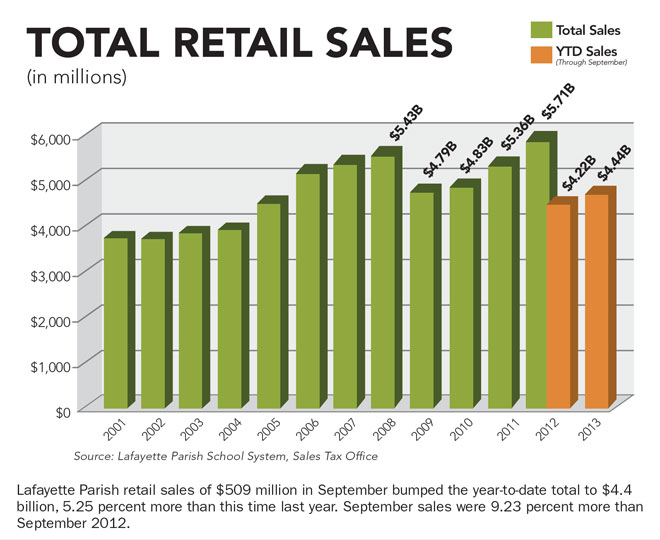 In addition to the positive employment indicators, the state of bankruptcies in the Western District of Louisiana has continued to improve with only 895 bankruptcies in September. Year-to-date bankruptcies (7,871) are slightly lower than this same time last year (7,874).

Louisiana Rig Counts are the only lagging indicator that has not shown considerable improvement in the past two years. There were 111 rigs on and offshore this September, which is up from the 103 rigs in July this year-  the lowest count since we started collecting the data in 1997. The bleak number of rigs, impacted by the decrease in onshore rigs in the Haynesville Shale area, is the result of falling natural gas prices and the lack of desirable wet gas in the play. On a positive note, natural gas prices through the first three quarters of this year have averaged 41 percent higher than the first three quarters of last year with an average price of $3.69/MMBtu. The higher natural gas prices could positively affect rig counts further down the line, but in the meantime this indicator continues to look murky. It would mean a lot if the price of natural gas could get above what the Wall Street Journal calls the "psychologically key mark" of $4/MMBtu and stay there.

In September, the offshore rig count increased to 52, up from the low of 14 in 2010. Though offshore and North Louisiana rig counts are sending mixed signals, the offshore rig counts are optimistic. With the price per barrel of crude oil holding strong, companies can hopefully feel comfortable with more investment and exploration. Even one rig represents thousands of jobs and hundreds of millions of dollars in capital investment, which is good news to Louisiana and, particularly, Lafayette Parish.