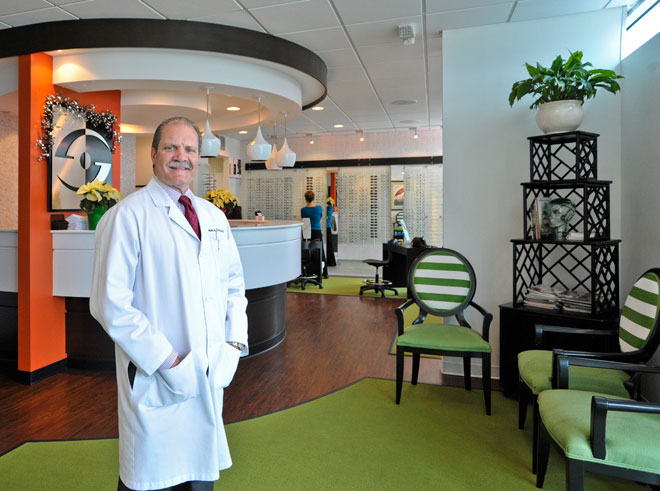 Over the last 15 months, Dr. David Fisher Jr. has totally transformed his plain white cinder block building at 1458 S. College Road into a modern, state-of-the-art vision center. Under the guidance of architect Jim Ziler, contractor R.S. Bernard & Associates, designer Todd Zimmerman and Fisher's wife, Nanette, the optometrist has made a major investment in the Oil Center with his $450,000 project.

"We've been wanting to renovate the office for some time, and move it toward a more modern presentation," Fisher says. "We also wanted to increase its efficiency by better coordinating patient flow in the clinic with the front office desk. The timing was right for us to move ahead with these renovations."

Since 2003, Fisher's office has been located in the 1950s-era building. In September 2012 he started the process of gutting and redesigning the dated building from the inside out. "We actually knocked everything out except for the three supporting beams," he says. "I had a design in my mind as to where I wanted the rooms and the kind of flow I wanted in the space I had to work with. But, I'm not a designer, so that part was done by my wife and Todd Zimmerman."

A modern façade with Fisher's new logo designed by Pixus Digital Printing highlights the exterior of the building. Upon entering the lobby, patients are greeted by staff at a sleek, semi-circular desk. After checking in, they can sit in the waiting room on comfortable bright green or mod black-and-white chairs recovered by Bearb's Upholstery. While waiting for their appointments, patients and guests can watch a large, LED Smart TV featuring eye care educational videos.

Across from the waiting area is the revamped optical shop with frames and lenses. All lenses are cut in-house. "We've brought in a few new higher-end frame vendors," Fisher notes.

Fisher's newly designed office has three full operating lanes for regularly scheduled patients. A fourth room is being converted into an "emergency" half-lane for patients with acute conditions. "Instead of interrupting my regular patient flow, we'll have a room to see patients for any acute care, including foreign bodies in their eyes, red eyes or any other condition we triage as urgent." This room can also be utilized for contact lens fittings and assessments.

The office also has a separate diagnostic room with specialized equipment. These high-tech instruments include Optical Coherence Tomography. "This is similar to an MRI, imaging the retina, but using ultrasound to generate the images," Fisher explains. Also inside are the Humphrey Visual Field Analyzer, used to subjectively plot a patient's field of vision and determine the functional effect of any disease process on the patients' visual field; Visual Evoked Potential to detect defects along the visual pathway from the eye through the brain; and Preferential Hyperacuity Perimeter to follow patients with macular degeneration in determining either early onset of "wet" (bleeding) age-related macular degeneration or the potential conversion from "dry" to "wet" AMD.

In practice since 1991, Fisher was invited to move into the building on South College by his father-in-law, Dr. Bill Sonnier, an ophthalmologist. Sonnier's cousin, Dr. Lee Sonnier, an ear, nose and throat specialist, originally constructed the building, utilizing an A. Hays Town design. Fisher's office walls are still lined with Audubon prints that his father-in-law gave to him.

Today, Fisher's business is officially called Dr. David Fisher Jr. and Associates and is a member of Vision Source. Practicing with Fisher are Church Point natives Drs. Eric Boudreaux and Claudette Smith-Boudreaux. A number of his employees have worked with him for years, including front desk manager Lou Anne Jacques, who has been with Fisher for 20 years; Susan Melancon, a certified para-optometric assistant and dispensary manager/technician who has been with him for 18.5 years; Angel Villalobos, an optician and lab manager who has been with him for 13.5 years; and Chanita McGalliard, a contact lens coordinator and technician, 10 years.