The Cajuns will have an opportunity to prove they can travel' in 2014. Here's why.

When the crystal football awarded to the last BCS champion is lifted overhead, only 235 days will remain before Louisiana's Ragin' Cajuns kick off the 2014 season. Actually, in some ways, next season has already begun. In the immediate aftermath of the New Orleans Bowl, coach Mark Hudspeth emphasized that a bowl win gives a team a "positive attitude" heading into the offseason. Instead of pondering the impact of a three-game slide, the win over Tulane allows the Cajuns to focus on 2014 and what might become the best season in UL history.

Inside linebacker Justin Anderson (No. 34), who had eight stops in the New Orleans Bowl, is a major defensive loss for the Cajuns next season.

After three straight 9-4 records and three straight bowl wins what might "the best season" look like? How about a sole Sun Belt Championship, a signature win or two, a national ranking and the usual bowl win? All very possible, if, as in all human endeavors, fate allows.

First, let's consider who the Cajuns must do without. On offense they lose three starters, but one is receiver Darryl Surgent, first team All-Sun Belt return specialist. Surgent holds the New Orleans Bowl punt return record (87 yards against San Diego State), is UL's career KO return leader and second in career all-purpose yards (4,886). Both tight ends, Jacob Maxwell and Ian Thompson, are gone as well. But the biggest loss, in more than one way, is 6-foot-2-inch, 285-pound center Andre Huval, another first team All-Sun Belt selection. Huval was smart and durable, calling signals for the offensive line and finishing his career with 39 consecutive starts; his first came when running back Elijah McGuire was a 10th grader.

The Cajun defense loses only two starters. Up front Brandon McCray's effort and size (6'5" 318) will be missed. Justin Anderson's absence will be mourned. With eight stops in the New Orleans Bowl Anderson tied Steve Spinella (1984) for 4th all-time in single season tackles. The first team All-Sun Belt inside linebacker led the league in tackles with 131, more than the second and third Cajun tacklers combined. Anderson's game against Western Kentucky might have been the best ever by a UL linebacker (16 tackles, two for losses, two forced fumbles, two fumble recoveries).

As great as those seniors were, they represent only five positions out of 22 (seven out of 28 if you count specialists who all return besides Surgent). And in Hudspeth's fourth year an important point: Everyone who now plays football at UL has known nothing but success. 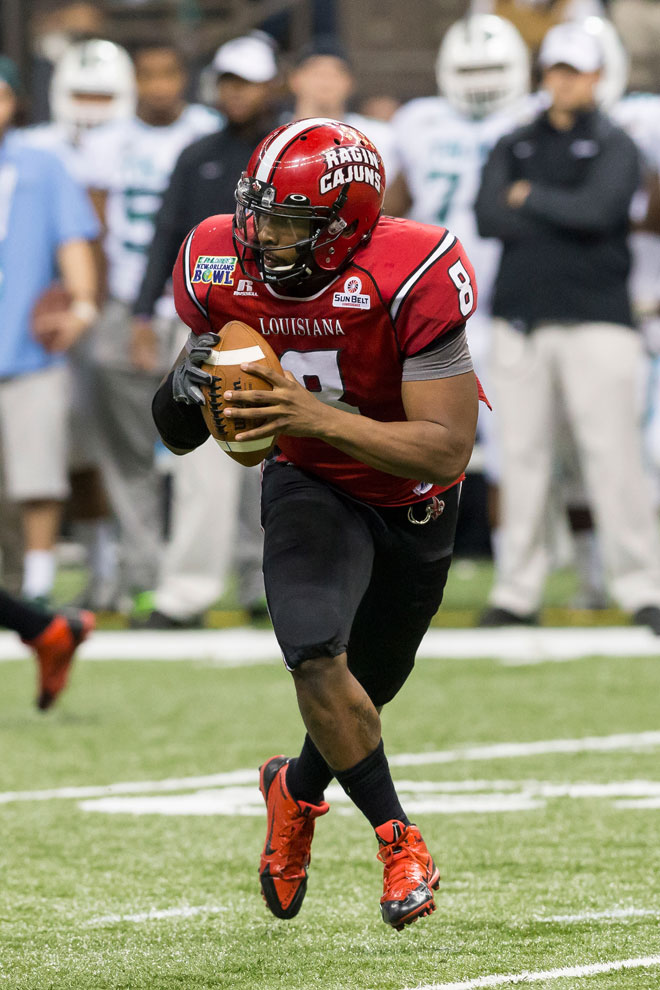 Terrance Broadway enters 2014 as the No. 1 QB in the Sun Belt Conference.

The entire defensive backfield returns. Sean Thomas, TJ Worthy, Corey Trim and Trevence Patt were starters for 48 out of 52 opportunities. After a three-interception game-changing performance against Tulane, they could be dominant in 2014. Keep an eye on Simeon Thomas for a possible breakout year.

Maybe the only two people in Lafayette who see a silver lining to Anderson's departure are linebackers Dominique Towell and Trae Johnson. At least next year they'll get a shot at making some tackles. Both are capable. Towell was honorable mention All-Sun Belt and Johnson was Sun Belt Defensive Player of the Week after the Georgia State game.

Next season's defense could be Hudspeth's best ever, but in your heart you know offense is at the end the rope you're holding. And the offense will be impressive. The line returns with loads of experience, except for Huval, who was a converted guard. That process could be repeated. Jamal Robinson (6'4") will lead the receivers. It's possible the Cajuns could flank three wide outs who are 6'4", 6'3", and 6'5". For variety add three junior college transfers, Teurlings grad Dylan Bossier and two from JUCO National Champion East Mississippi CC, CJ Bates and Antoinne Adkins. Tight end is available for incoming freshman Anthony Jones (6'6" 231) from New Orleans power Edna Karr.

With two first team All-Sun Belt running backs, Alonzo Harris and Sun Belt Freshman of the Year Elijah McGuire, UL has talent and depth where it matters most. Or maybe second most. As 2013 proved, depth at quarterback is the difference between a good season and a great one. Two games with Terrance Broadway absent or not at full strength were not enough to determine the reliability of backups Jalen Nixon and Brooks Haack. Another offseason will help both.

What we do know is that Broadway enters 2014 as the No. 1 quarterback in the Sun Belt. Check the current status of Corey Robinson (Troy): gone; Ross Metheny (USA): gone; Adam Kennedy (ASU): gone; and Kolton Browning (ULM): gone. And all of Western Kentucky: gone. The opportunity will be there in 2014 for Broadway and UL to dominate the Sun Belt. Of all the goals of a "best season," winning the Sun Belt is the most attainable. 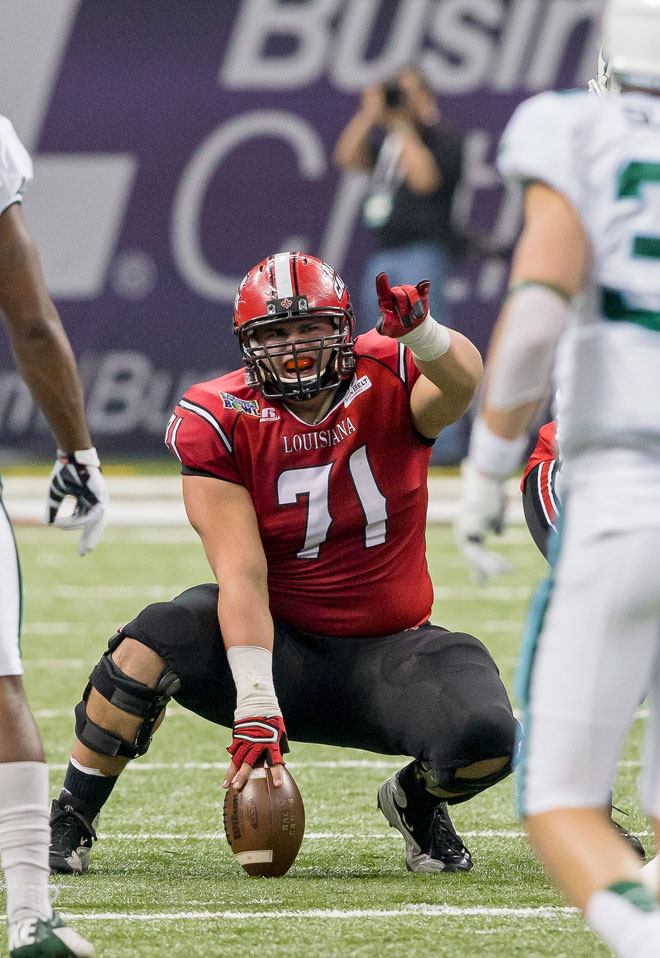 UL center Andre Huval, a first-team All-Sun Belt selection, could be the biggest loss for the Cajuns.

As for other goals, both a signature win and a national ranking will be determined before conference play begins. The home opener against Southern might set an attendance record again, but the following two games, at Ole Miss on Sept. 13 and at Boise State on Sept. 20, will set the parameters for the season. Win one or both and the Cajuns are in the national spotlight; lose both and they return to a well-worn path. Fans will get a preview of both matchups when Ole Miss meets Boise in Atlanta Aug. 28. Expect the Rebels to win that game and the Cajuns to have their best chance for a win in Idaho. Hudspeth is 1-0 against new Boise State head coach and ex-Arkansas State head coach Bryan Harsin.

The Cajuns will go bowling next year. A 9-3 record or better will give Cajun fans a chance to see other parts of the country (or state) and prove they can really "travel."

Anything less and they'll always have New Orleans.