Trigger point dry needling may be relatively new to Acadiana, but for one chronic back pain sufferer, the treatment is nothing short of revolutionary.

For about six years, Kevin Dupont had lived with the excruciating pain from a back injury he sustained in a dirt track racing wreck in 2006. 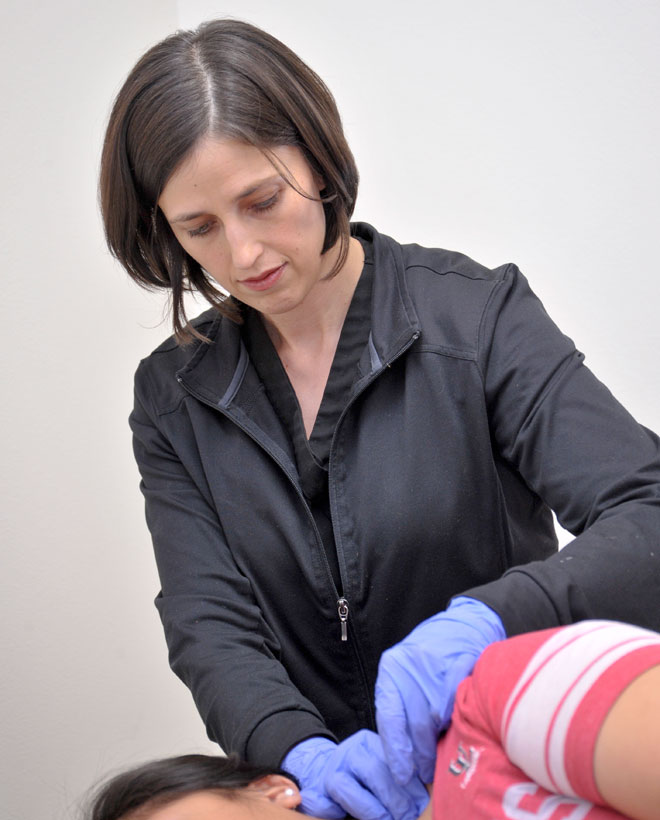 "My car got hit in the rear, broke an axle and flipped about four or five times," recalls Dupont, a 27-year-old veteran racer from Carencro who's been involved in the sport since he was 13.

Dupont walked away from the wreck visibly unscathed, and thinking himself "bulletproof," as he describes it, opted against going to the hospital that day. That, however, would change six months later.

"I went to reach for something on the top of a cabinet and that's when it bit," says Dupont. "I went down from there, had an MRI, and the doctor told me I shouldn't be having any trouble. But I went and got a second opinion, and was told I had a definite problem."

For the next few years, back pain became a way of life for Dupont, who despite the increasing discomfort - including headaches and constant sleepiness - continued racing.

"All I knew was that I was hurting, and even though I'd been to several physical therapists and a chiropractor, it was like my body kept going on this downhill slope," says Dupont. "Finally in November last year, I saw an endocrinologist who suggested Healthe Habits."

Taking that advice, Dupont made an appointment with Kerry Hoffpauir, a physical therapist with Healthe Habits for Living, who was utilizing a relatively new form of therapy, at least in Acadiana, called Trigger Point Dry Needling.

Like acupuncture, dry needling, as the name suggests, employs the use of needles to relieve chronic muscle pain, but that's about where the comparison ends, says Hoffpauir, a physical therapist for 16 years who's been practicing the trigger point technique since 2009.

"Whereas acupuncture is more of a systemic global approach, with trigger point, we'll only treat that certain area that is injured as opposed to having needles all over your body," explains Hoffpauir. "Trigger point is very mechanical. Each muscle has a trigger point area, and when injured it goes into a contracting state, pulling and putting tension on the tendon and joint. When we put the needle in this area, a reflex tension response happens, and the muscle contraction lets go. It creates less pressure on the surrounding tissue, and you also get more circulation and more of a natural healing effect."

For Dupont, the effects of the treatment were immediate: "I was so bad off at the time that when she would stick the needles - there were maybe five needles that first session - I could actually see the muscle immediately relaxing."

In addition to chronic pain like Dupont's, which can require anywhere from four to eight treatment sessions, Hoffpauir says the technique has also proven effective for new injuries and can significantly reduce recovery time if treated early.

"It varies as to how long people have been injured," says the physical therapist. "Some people I'll treat one time and it gets them to the next phase of therapy; for others it might take four to six or eight different treatments, and for some people I'll treat them longtime."

In Louisiana, the technique is a relatively new concept, receiving approval from the state Board of Health and Hospitals only two years ago. Though trigger point has since started to catch on, especially in Baton Rouge, the concept is pretty unknown in Acadiana, where it's currently offered at only two physical therapy offices, Healthe Habits and Orthopedic & Sports Physical Therapy.

"It's something a lot of people don't know about, but it's definitely growing," says Hoffpauir. "In Baton Rouge it's become really popular. It's spreading by word-of-mouth as well, and even though it's still not well known in Lafayette, I definitely see it as the future of physical therapy in the mainstream."