Revised flood maps for Lafayette Parish are coming this fall - and a lot of residents and businesses won't be happy with the results. 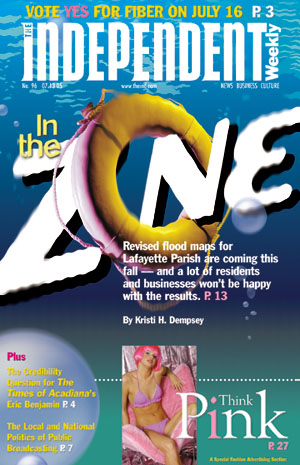 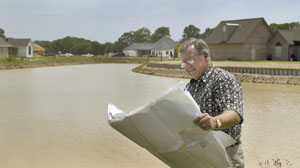 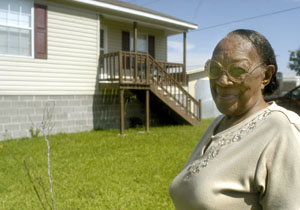 The engineer checked off the hours, the tension building. There was less than half an inch of rainfall in the first two hours, beginning at 10 p.m. May 11, 2004. As the clock struck midnight there was a lull.

At 1 a.m. the drumming began in earnest, and the rainfall amounts ticked up each hour: .89 inches, 1.14 inches, 1.18 inches, 1.22 inches, reaching a crescendo at 5 a.m. when the skies dumped 2.68 inches of rain in one hour, followed by another 10 inches by 8 a.m., according to a government-monitored rain gauge at Gloria Switch Road.

Carencro woke up wet, as the storm's fury affected dozens of homes with flooding in places where water had never before gone. Forget a 100-year flood, says Larry Broussard, engineer for Lafayette Consolidated Government. The northern part of the parish had taken on almost 17 inches of rain in less than 11 hours ' the equivalent of a 150-year flood.

Most people in the more populated southern part of the parish never knew how close to catastrophe they had come. Had the same amount of rain fallen south of Interstate 10 that night, Broussard believes the entire parish might have been a disaster area.

Like the local weathermen, Broussard has an intense interest in rain ' specifically, where it will go when it falls. That's why he's been an integral part of the development of new Flood Insurance Rating Maps, set for tentative release by the Federal Emergency Management Agency this fall. Release of the maps will set into motion an ambitious parish-wide Comprehensive Stormwater Drainage Plan affecting every person living in Lafayette Parish. The drainage plan is the first major effort on the part of Lafayette in a century.

Five years in the making, the flood insurance rate maps are based upon a hydraulic model of the parish that is being developed by the UL Lafayette engineering department.

FEMA is required to revise its flood maps in a given area every few years, but no intensive study of Lafayette Parish has been done for 25 years. "This was coming whether we chose to participate or not," Broussard says. "We felt it was a good opportunity for LCG to piggy back on the study. We wanted to get the most accurate maps we could."

The FEMA contract is for $722,000, which is being matched by LCG, the cities of Broussard and Carencro and the towns of Duson and Youngsville. The Bayou Vermilion District is also picking up part of the tab. The Army Corps of Engineers is administrator of the project.

Lafayette has 32 major drainage areas, and the study meticulously maps 23 of the most important sites, such as Coulee Ile Des Cannes and the Isaac Verot Coulee. Previously, most of the FEMA maps were based on a history of known flooding in any given area, along with educated guesses made by civil engineers. As a result, Broussard says conflicting information plagues the maps currently being used. The new maps will be digitized and available online, so a property owner can get an instant look at the flood plains in Lafayette Parish.

The new Flood Insurance Rating Maps will be significant because some homes and businesses will be placed in a flood zone for the first time, while others might be taken out, says Tony Tramel, director of Traffic and Transportation for LCG.

"This has important land-use development costs associated with these changes," Tramel says. "A series of public hearings will be part of the process. Some people will be happy, some very unhappy. This change more than likely will have an impact on the price of land."

"There are people in the flood plain today, even though the flood maps say they aren't," Broussard adds. "With these new maps they can now seek protection."

The new maps also mean that mortgage lenders will require property owners to carry flood insurance offered through FEMA, which usually runs around $350 a year for the average house, depending on the amount of coverage the property owner buys, says David Passey, a spokesman for FEMA's Region 6 office in Denton, Texas.

Property owners won't be the only ones affected, says Mike Hollier, planning manager for LCG's Traffic and Transportation department. Hollier served as the point man for bringing all of the parish municipalities together to participate and implement the drainage plan. Local government got involved with the project to play a role in helping homeowners and property developers reduce the higher costs of building and protecting property in and around flood zones.

As a result, Hollier has found the money, mostly through state and federal grants, to propose the building of regional stormwater drainage facilities that could not only mitigate potential flooding, but also serve as a half dozen new city parks. Floodwater drainage projects often use retention basins to capture and release rainwater, in this case covering hundreds of acres each. These ponds could become the centerpiece of the new parks. Hollier says that at Lafayette Parish's current rate of growth, it's been determined the city will need at least this many new parks within the next 20 years. After the maps are completed, Hollier says the city will be able to run computer models that will determine where the retention ponds must be.

There is also an environmental component to the plan: the water captured and later released into the parish's bayous, coulees and the Vermilion River would be treated to meet EPA standards, making area waterways cleaner. Lafayette's population growth means that EPA regulations requiring the removal of stormwater contaminants will be a challenge the city must address in the very near future, Hollier says.

The plan will come at a price. While government is good at finding the money to build such projects, it's often bad about maintaining them, Hollier says. He believes it's likely that city-parish government will treat stormwater drainage as a new utility, adding it onto the cost of the water or electric bill.

St. Petersburg, Fla., has had a drainage utility fee for more than 20 years, says Mike Link, manager of special projects for the engineering department of his city.

The original bill was $4.50 a month for all city utility users, but was recently raised to $6. The fee is tied to the consumer price index, so it will increase annually by a few pennies. The cost is based on an average single family dwelling of a little more than 2,700 square feet. Link says commercial development is charged by dividing the total number of square feet by the 2,700 figure, so the owner of a 100,000 square foot structure would pay around $37 a month. The utility in St. Petersburg now raises about $10.2 million a year through the program, $800,000 of which is used on new capital drainage projects, and the rest to maintain current facilities.

Hollier says the city wouldn't institute a new utility without putting it to a vote. Link says residents in his city recognized the need for a drainage utility, so nobody protested it.

This new drainage plan will be set in motion quickly, Hollier says. He's hopeful that the city can move forward with the plan by as early as next year.

"This express train is coming," Hollier says. "And it's coming this fall. I know people will be upset."

While last year's flood ravaged homes in the Carencro area, one remained high and dry. It serves as an example of why development standards need to be tightened across the parish. It is partly because of "poor development habits" that some homes and businesses now flood when they never did before, says local architect Lynn Guidry.

The owner of the property, 92-year-old Ozeta Wood, complained bitterly at city hall after the Carencro City Council voted on tougher construction ordinances several years ago. In the case of Carencro, an area with a history of flood problems, the council required that property developers build one foot higher than what FEMA considered safe on the current maps. That added around $3,500 to the bottom-line cost to build the home. Carencro was the first municipality in the parish to implement construction standards tougher than those required by FEMA.

Guidry helped craft the ordinance, and he says the new home did look strange, towering a foot above its neighbors near the Beau Basin Coulee.

"I drove by, and it did make me feel a little guilty," he says.

Wood thanked members of the city council after the Carencro flood last year, while her neighbors were clearing out mud and water from their houses.

A new bridge under construction over the coulee rises higher than the previous structure, and Barnard Road is being reconstructed at a much higher level, so the house no longer looks out of place.

That's why the digital maps will be so important, says Guidry. They will predict exactly where runoff from a rainstorm will go after a new home or project gets built, much like the transportation department can predict how much new traffic a project will generate.

John C. Broussard, owner of Youngsville Contractors LTD, voluntarily constructed flood mitigation on several subdivisions in that area ' in once case adding $30,000 to the cost of a 39-home subdivision. "The cost is a lot," he says, "and the liability is high, too."

The homeowners have to absorb the additional cost of drainpipes and retention basins, and the homeowner associations will have to pay for the liability insurance. Broussard said the first premiums he was quoted were up to $8,000 a year for each retention basin (he is building up to seven such ponds), although he shopped and found somewhat better prices.

John Broussard has long been a proponent of regional drainage facilities, like the ones the parish proposes to build. "We've been needing something like this for years," he says. Developers likely will be invited to buy into the system, which will help pay for the cost of building it.

When the new flood maps are released, the public will be allowed a 90-day period to appeal. During that period, a property owner would have the right to prove that the map has technical problems, says Passey, the spokesman for FEMA. The agency, however, will only consider appeals based on engineering. (Broussard says government welcomes any input that might help make the maps more accurate.)

According to FEMA's Web site, nearly 20,000 communities are adopting and enforcing floodplain management ordinances to reduce future flood damage. In exchange, FEMA offers federally backed flood insurance, which is available to homeowners, renters and business owners in these communities. It can be purchased through local insurance carriers.

FEMA's Passey says property owners won't be directly contacted if the status of the flood plain changes. Once mortgage lenders and insurance carriers are notified, owners will be informed whether they're required to carry the insurance.

After that 90-day appeal period, the maps will go into effect. Hollier says an update on the status of the maps' release is scheduled for later this month.

FEMA has become much more aggressive in recent years in its efforts to help property owners mitigate flooding. In East Baton Rouge Parish, for example, where property owners have experienced multiple "flood events," the agency is offering grants that pay for raising entire structures above the flood plain.

Fortunately, Lafayette doesn't have any area that has repeatedly flooded. Officials want to keep it that way with the regional drainage system. LCG engineer Larry Broussard says city-parish government wants to do the right thing for property owners.

"I represent them as a citizen of this parish," he says. "Your home (or business) is the biggest purchase you'll make. We don't want a flood to devastate them."