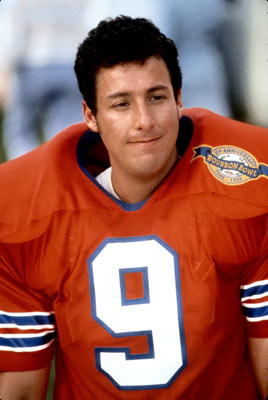 Adam Sandler's character Bobby Boucher from
the 1998 comedy "The Waterboy" will hopefully
be roundly ribbed by Ancelet during the series.

Swamp People and The Waterboy ain't got nothing on these guys. Establishing and perpetuating stereotypes about Cajun culture is an age-old specialty of film - notably film shot by outsiders.

UL Lafayette folklorist and professor Dr. Barry Ancelet will lead a five-session film series beginning Sunday, Jan. 19 that will explore film representations of South Louisiana and Cajun culture over the years - representations that in many cases established or perpetuated stereotypes about Cajuns and their folkways.

"Portrayals of the Cajuns invariably are built around violence, racism, alcoholism, ignorance, isolation and inbreeding," Ancelet notes. "Traditional occupations such as trapping and fishing are almost exclusively used as the context for Cajun characters and thus set them in a rural, rustic, isolated, underdeveloped and extremely wet world."

The series launches with a screening of Louisiana Story, Robert Flaherty's 1948 documentary about a Cajun boy whose pastoral life is threatened by nearby oil drilling. The doc earned accolades and is generally respected in film circles, although it was one of the first to present Cajuns as isolated, superstitious rubes with little connection to contemporary America.

The series resumes on Feb. 16 with Les Blank's Spend It All, a well-meaning short documentary from 1971 that features French-speaking musicians Marc Savoy, Nathan Abshire and the Balfa Brothers. According to Ancelet, although Blank had good intentions, Spend It All is also fixated only on the rural, hunting/gathering, living-off-the-land aspects of the culture. Nuance, where y'at?

On March 16 it's Paul Goldsmith's The Good Times Are Killing Me, a 1975 documentary that aired nationally on PBS and was so bad it reportedly made the late-great Dewey Balfa cry and the Council for the Development of French in Louisiana to threaten a class-action lawsuit.

April 8 will feature a series of outtakes from feature films with analysis and discussion by Ancelet.

Then it gets better in terms of treatment, concluding with screenings of documentaries by local filmmakers Pat Mire (Anything I Catch, 1990) and Connie Castille (I Always Do My Collars First, 2007) that explore facets of Cajun culture with tender, probing understanding.

The "Images of South Louisiana in Film" series is free and open to the public and will be held in Oliver Hall on campus. It begins at 3 p.m. For further information visit the College of Liberal Arts' website or check it out on Facebook.