It may be unprecedented to have three statewide-elected Republicans, all with their own strengths and weaknesses, eyeing the same seat in Louisiana, but U.S. Sen. David Vitter has made it a reality with his announcement for governor early Tuesday morning.

It may be unprecedented to have three statewide-elected Republicans, all with their own strengths and weaknesses, eyeing the same seat in Louisiana, but U.S. Sen. David Vitter has made it a reality with his announcement for governor early Tuesday morning. 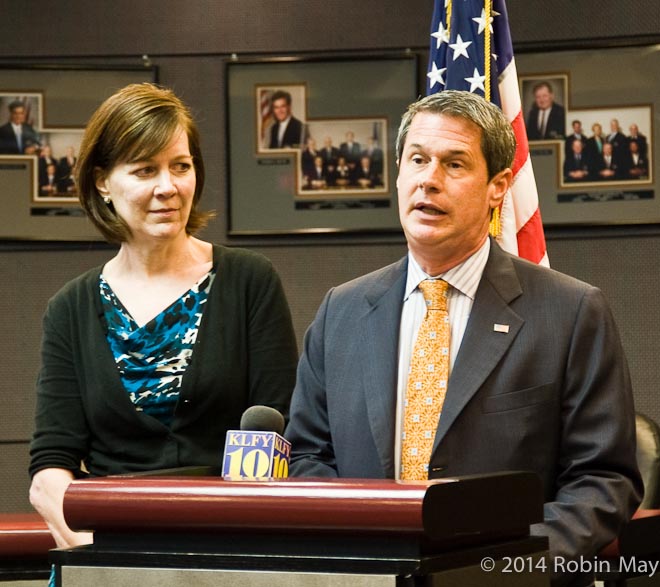 U.S. Sen. David Vitter, pictured with his wife Wendy in 2010, made it official Tuesday morning: He will run for governor next year.

With sources telling LaPolitics that Treasurer John Kennedy has begun letting donors and friends know he's planning to run and Lt. Gov. Jay Dardenne all but announced, there isn't much room left for any other Republicans to jump into next year's contest.

That leaves the Louisiana Democratic Party with the next major move to make. While state Rep. John Bel Edwards, D-Amite, previously the only announced candidate, could theoretically gain the kind of momentum needed to grab a runoff spot, politicos are still looking for a brand-name Dem to get in the race.

Without one, some argue an all-GOP runoff is certain - in which case, Democratic voters, along with independents, could eventually become the most important factor in the Republican-heavy race. It's already a trend in Louisiana, playing out most recently in the 5th Congressional District, where Democratic voters helped pick a moderate-to-conservative winner between two Republicans.

New Orleans Mayor Mitch Landrieu, facing his own re-election bid Feb. 1, continues to be included as a possibility. But by accepting an endorsement earlier this month from President Barack Obama in the mayor's race, naysayers contend he may have lost a healthy dose of the white vote statewide he would have needed to be successful.

John Bel Edwards will have to carry the unpopular Obama label as well, as would any mainstream Louisiana Democrat. So the question then becomes who would carry it better.

In a three-way race with party ID provided, the poll showed Vitter leading with 35 percent, followed by Landrieu at 29 percent and Dardenne at 22 percent. Those numbers show Vitter may not be as omnipotent as his followers believe and that a Democrat could chip away at the race in a meaningful way.

The financial figures represent something entirely different. While the state Ethics Board has refused to rule on a request by the Fund for Louisiana's Future to remove the state's $100,000 contribution cap, a federal court could soon have the case and shift financial momentum Vitter's way.

FLF is a Super PAC established to back Vitter's run for governor. And even though the junior senator is prohibited from being involved in how its money is spent, he will certainly benefit. Moreover, there's no other candidate in the race who can match the effort or raise money across the nation.

Vitter is going to make the 2015 race for governor the most expensive on record. But that privilege also comes with a heavy target on his back. Consultants and operatives are already busy at work trying to link Vitter with the FLF Super PAC. Even if the ties that bind are loose, they'll still be able to make the argument that Vitter is overseeing his own Louisiana Purchase.

A more predictable approach for opponents may involve reminding voters of Vitter's "serious sin," which is a 7-year-old controversy. Sex on TV, even in campaign commercials, though, would hold attention spans better than campaign finance reform.

As for Kennedy, he's not giving a public statement beyond that he is "very, very interested" in the race. But he did let his numbers do the talking with his annual state campaign finance report he released last week - a month early - showing more than $835,000 raised in 2013 and nearly $3 million in the bank.

While Dardenne isn't expected to file his latest report for another couple weeks, he went into 2013 with $717,000 in the bank - less than what Kennedy actually raised last year. The difference is Kennedy has survived recent years with no real challenges.

Dardenne had to raise $1.2 million for his special election as lieutenant governor in 2010 and then another $1.5 million the following year to fight off Plaquemines Parish President Billy Nungesser. After blowing through that, he had no choice but to start fundraising all over again.

The lieutenant governor has showed he can step it up when needed. He raised $1.2 million to run for secretary of state, which, before that, was virtually unheard of. He's also regarded as a guy who has the money scene wrapped up in the Baton Rouge region, forcing opponents to look long and hard elsewhere.

For Vitter, this could be his final hurrah. "This will be my last political job, elected or appointed, period," he said in his announcement for governor Tuesday morning.

That means Democrats may soon have to turn away from who they can get to stand for governor to who might be willing to run to eventually replace Vitter, should he win or lose in 2015.

Republicans, to be certain, will have something to say about that as well. Since Vitter, if he wins, would appoint his successor, it could become a plum to get Kennedy's endorsement - or a consolation prize for the loser of this fall's Senate race. Either way, Vitter has made a strong opening move that could shift the political landscape for the foreseeable future.