The school board in this rural Louisiana parish is facing a federal lawsuit brought by the parents of a student they say was harassed because he isn't Christian. 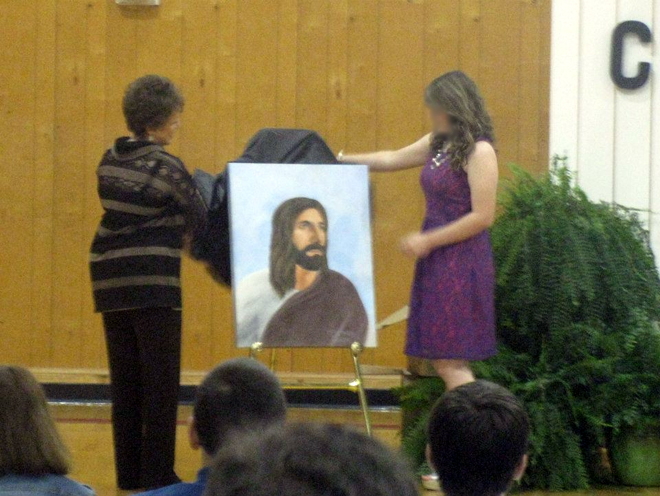 This photo, from a group of photographs on a Facebook page devoted to images from Negreet High School, shows what appears to be a student and administrator unveiling a portrait of maybe former Doobie Brothers vocalist Michael McDonald or probably Jesus during an 8th grade graduation ceremony in the school gymnasium.

The school board in this rural west Louisiana parish best known for the Zwolle Tamale Festival is facing a federal lawsuit brought by the parents of a student they say was harassed by fellow students, teachers and administrators at his public school because he isn't Christian.

The American Civil Liberties Union of Louisiana brought the suit against the board on behalf of Scott and Sharon Lane and their five children, including 6th grader C.C., an adopted child of Thai heritage who is Buddhist. The suit seeks to stop the school system from harassing C.C., promoting the Christian faith and to reimburse the family for the cost of transporting the youngster to a different school.

According to the suit filed Wednesday in federal district court in Shreveport, Rita Roark, C.C.'s science teacher at Negreet High School - a rural school that serves grades kindergarten through 12th - is an out-and-proud young earth creationist who teaches her students the earth was made by God 6,000 years ago, that the Bible is "100 percent" true and that evolution is impossible. The family also claims in the suit that Roark routinely peppered her tests with fill-in-the-blank questions like, "Isn't it amazing what ________ has made!!!!!!!" The expected answer for the blank is, obviously, "the Lord" or "God" and, according to the suit, when C.C. failed to provide the preferred answer he was belittled by Roark in front of classmates.

The suit also claims that when the Lanes complained to parish Superintendent Sara Ebarb, the super's response was, "This is the Bible Belt." Ebarb, according to the suit, suggested C.C. change faiths or transfer to a school 25 miles away where "there are more Asians."

The suit also says that Negreet High regularly promotes religion - Christianity specifically, natch - via classroom prayer and prayer at school events, and that school officials display religious iconography throughout the campus including a large portrait of Jesus and an electronic marquee in front of the school scrolls Bible verses as students enter the building.

Defendants in the suit are the Sabine Parish School Board, Ebarb, Roark and Negreet High Principal Gene Wright.

The Associated Press reached out to the superintendent, but she was unavailable for comment late Wednesday. We got on Facebook and found a page devoted to photos from Negreet High School and, sure enough, there's one of what appears to be a student and an administrator at a school function unveiling a large portrait of Jesus. (We're relatively certain the photograph was taken at an official school function because there are more than a dozen other photos from the same event - an 8th grade graduation ceremony - in the school's gymnasium.)

Read a PDF of the suit here. You can also read the ACLU's memorandum in support of the temporary injuction by clicking here.