When it comes to issues of wetlands loss, oil exploration and climate change, a new survey by the group America's Wetlands reveals surprising consensus among Republicans, Democrats and independents.

When it comes to issues of wetlands loss, oil exploration and climate change, a new survey by the group America's Wetlands reveals surprising consensus among Republicans, Democrats and independents.

The most positive takeaway from the survey is the widespread awareness among Louisianans that coastal loss is a serious issue that should have front-burner status as well as the (somewhat) surprising uniformity on the issues among respondents with differing political identification.

"People are anxious," says Val Marmillion, managing director of America's Wetlands Foundation, the nonprofit that commissioned the survey. "These are very high, off-the-chart numbers making coastal restoration the issue of their lifetime."

When asked whether saving the coast is the most important issue of our lifetime, 74 percent of respondents agreed. Within that group were 74 percent of Republicans, 85 percent of Democrats and 70 percent of independents. The percentages by political affiliation varied only a little among the questions in the survey, indicating that those closet to the critical issue of coastal loss view it outside of a political prism.

"People are very unified on this issue and they don't really have the patience for toxic partisan politics around this issue, and they're not going to stand for it if they see it happening," says Marmillion. 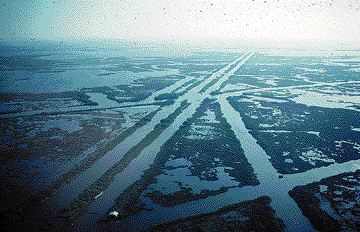 "Honestly, political party and location (in the state) pretty much do not transcend the importance of the issue - it's universal," adds Sidney Coffee, senior advisor to the group. Coffee served as a coastal advisor to Govs. Mike Foster and Kathleen Blanco.

Coffee also noted that Louisiana residents uniformly support Louisiana's plan to save the coast and will brook no delays in its implementation, even by sympathetic industry groups like oyster fishermen who could be adversely impacted. "They don't want one special interest to delay implementation of the action plan," she says, explaining that for oyster fishermen, who work on three year cycles (from seeding a bed to harvesting oysters), freshwater diversion from the Mississippi River to coastal wetlands - a facet of the plan designed to reintroduce silt and build up the land - would necessarily involve some economic pain.

Following are more findings from the survey:

? Ninety-five percent of voters think leaders of both parties need to cooperate to solve the problem. Ninety-seven percent of Republicans, 90% of Democrats, and 97% of Independents hold this opinion.

? Eighty-four percent of Louisiana voters believe it is reasonable to both drill off the Gulf and protect the environment of the Gulf Coast. The results indicate 87% of Republicans, 81% of Democrats and 84% of Independents hold this opinion.

? Overall, 97% of the voters believe the Gulf Coast can produce both seafood and energy. Ninety-seven percent of Republicans, 97% of Democrats, and 95% of Independents agree with this statement.

? Ninety-four percent of the voters agree that it will take a cooperative effort among the energy industry and local and state governments to balance of industry priorities and environmental concerns. Ninety-six percent of Republicans, 96% of Democrats, and 92% of Independents strongly agree with the statement.

? Sixty-five percent of Louisiana voters believe Americans must learn to consume less in order to become energy independent and protect the environment. The one group who disagrees with this position is strong Republicans. Only 46% of strong Republicans agree with the idea that
Americans must learn to consume less, and 54% believe that drilling does not hurt the environment.

? More than 70% of Louisiana voters say climate is a serious problem that threatens everyone. Sixty-six percent of Republicans, 83% of Democrats, and 72% of Independents feel climate change is a serious threat.

? Eighty-three percent of voters believe there is a direct connection between the costs of property insurance and wetlands and barrier islands. Examining the partisan responses indicates 85% of Republicans, 83% of Democrats and 82% of Independent voters hold this opinion.