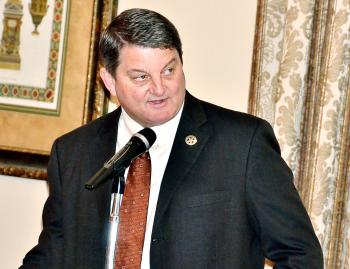 Photo courtesy of the Franklin Banner-Tribune

Lawsuit seeks answers
A second lawsuit has been filed against the St. Mary Parish Sheriff's Office by the family of one of the men killed last year in a shoot-out with a mentally unstable gunman. The latest filing, which comes on the heels of a suit filed last week by the family of Chitimacha Tribal officer Sgt. Frederick Riggenbach, was filed Monday by the family of Eddie Lyons Sr., who lived next door to the gunman. According to this report by the Franklin Banner-Tribune, both suits question the sheriff's office's decision to release Wilbert Thibodeaux - who had been arrested several days before the shooting by Riggenbach for disorderly conduct - despite being aware that he suffered from a severe mental condition and was in a deteriorating state at the time. On the day of the shoot-out, Lyons, like Riggenbach, was left to fend for himself after the sheriff's office issued a "stand down" order, resulting in one cruiser fleeing the scene and another avoiding it all together. For the family of Lyons - who was shot but died after his body became engulfed in flames - the suit is about more than just getting money, it's about getting answers, their lawyer tells the local paper. They want to know what really happened.

More on the weather
Acadiana's news media has had a field day this week reporting on the weather, and though The Daily Advertiser didn't stray from the topic with this front pager, at least it took a slightly different approach this time around by focusing its weather-related news on the impact it's had on local business. That impact ultimately depended on who was open and who was closed over the last two days, as business for those who braved the ice ranged from steady to booming. For those who opted to stay home, the setback, according to local economic experts, will be "minor" at best.

When a victim cries wolf
The victim of an alleged armed robbery in St. Landry Parish may now be facing criminal charges herself after providing conflicting statements to police. According to this report from the Opelousas Daily World, the woman alleges she was robbed at gunpoint for money and prescription drugs, which led to the arrests of Keith Joseph and Ramon Guillory. A second round of questioning, however, resulted in their release due to "inconsistencies" in the victim's stories. As a result, the investigation has now been refocused on the victim, who could be charged with intentionally filing a false report. According to the Daily World, she claims she may have been "confused."