When Lafayette Parish School Board member Tehmi Chassion doesn't get his way, he has one fail safe: He'll call the police and say whoever ruffled his feathers roughed him up.

When Lafayette Parish School Board member Tehmi Chassion doesn't get his way, he has one fail safe: He'll call the police and say whoever ruffled his feathers roughed him up. 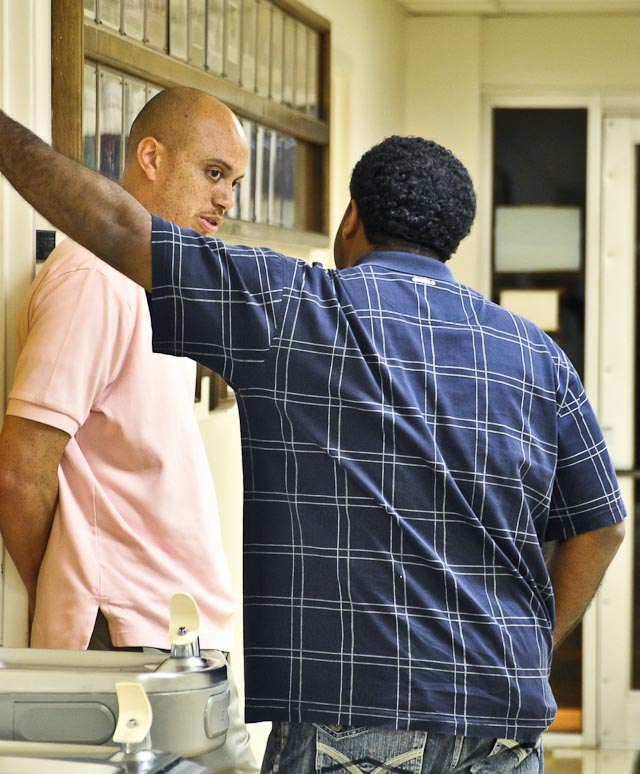 After calling the police on an IND reporter during a meeting last year, School Board member Tehmi Chassion, left, gets advice from his half-brother, City-Parish Councilman Brandon Shelvin

Chassion used that tactic when confronted last year by this reporter with a document proving he'd been arrested for attempting to spend counterfeit money at several local businesses, and it's the tactic he used during Wednesday's school board meeting against Superintendent Pat Cooper.

But let's back up a little bit before getting into what did or didn't happen Wednesday.

Last year, when The IND approached Chassion in the school system bathroom with proof of his arrest record, the board member barely skipped a beat before calling the Lafayette Police Department. By the time police arrived, Chassion's story had morphed from being approached by a reporter with a police report to being roughed up and violently grabbed by a reporter. Of course that never happened, as an audio recording of the encounter and a witness present for it all confirmed (read the story here).

The IND spoke Thursday with city prosecutor Gary Haynes to find out the status of Chassion's case alleging simple battery. Haynes says his office will not pursue charges due to "insufficent evidence" and that the case is closed.

In other words, Chassion filed a false report, abusing the resources of the city's police department.

Fast-forward to last night's meeting, when once again all civility flew out the window thanks to Chassion's penchant for telling tall tales to police. The breakdown came as the board met behind closed doors for an executive session discussion of a letter of demand for $200,000 submitted by Rina Tikia, the consultant hired by the board last year to oversee the selection process for the third party administrator of the school system's group health benefits plan.

According to reports from local media, during the board's 30-minute executive session, shouts could be heard coming from the board's conference room. That shouting, according to Cooper, who spoke Thursday morning with The IND, came from Chassion, who had become angered with LPSS Risk Management Director Mona Bernard over her refusal to immediately produce an email from Tikia. Though Cooper assured him the email would be available Thursday, Chassion wouldn't relent.

"Tehmi started shouting at Mona that she did things wrong," recalls Cooper. "He was shouting, yelling and demanding things from her. I was sitting behind him against the wall and literally put a finger on his arm and said, Excuse me that's not your employee, if you want anything you need to address me.' He continued to rant and rave, and we left the room and the next thing I knew he'd called the police."

By the time the police arrived on the scene, Chassion was claiming that Cooper had yelled in his ear, grabbed his shoulder and aggressively took him for a spin in his swivel chair.

"Tehmi is trying to make a big issue of the superintendent putting his hand on his shoulder and he's calling it assault," says board member and former board president Shelton Cobb. "I didn't see an assault. For Tehmi, it's all about a big show, not about the truth."

Like last year's incident with The IND, Chassion's call to police was preceded by a call to a group Cobb calls the board member's "li'l posse." That group includes Chassion's half-brothers Tony Chassion and City-Parish Councilman Brandon Shelvin, along with former City-Parish Councilman Chris Williams. As was the case last year, it didn't take long for Chassion's entourage to arrive on the scene of Wednesday's meeting.

"Of course the li'l posse showed up again," says Cobb.

Cobb was also among the witnesses to give statements to police following the alleged incident, including Rae Trahan, board president Hunter Beasley, Mona Bernard and the board's legal counsel Roger Hamilton Jr., who's also an assistant district attorney.

One concern for Cobb, he says, is the potential motive of members like Trahan and Beasley to have given bogus statements in an attempt to pave the way for Cooper's termination.

"I'm pretty sure Rae backed Tehmi - they're on the same team," says Cobb. "I'm tired of playing softball with them. I kept my mouth shut the whole time I was president, but I'll say it now: They have one objective in mind - Cooper's job."

Board member Kermit Bouillion echoes Cobb's recollection of what went down, saying the superintendent may have touched Chassion's arm or shoulder, but that was it.

"He never spun Tehmi around in his chair," says Bouillion. "I don't think it was necessary to call the police over an argument, but Tehmi's apparently a pro at all this."

In a preliminary report issued Thursday by the Lafayette Police Department, the investigating officer describes the incident, almost comically, in a one-line statement, writing: "During the course of a verbal altercation the suspect placed his hand on the victim. No arrest was made."

Board members Hunter Beasley and Rae Trahan, both of whom are often at odds with the superintendent, also gave statements, but what we can't wait to hear is what Assistant District Attorney Roger Hamilton, who was also a witness, will have to say.

His statement will carry more weight than anyone's.