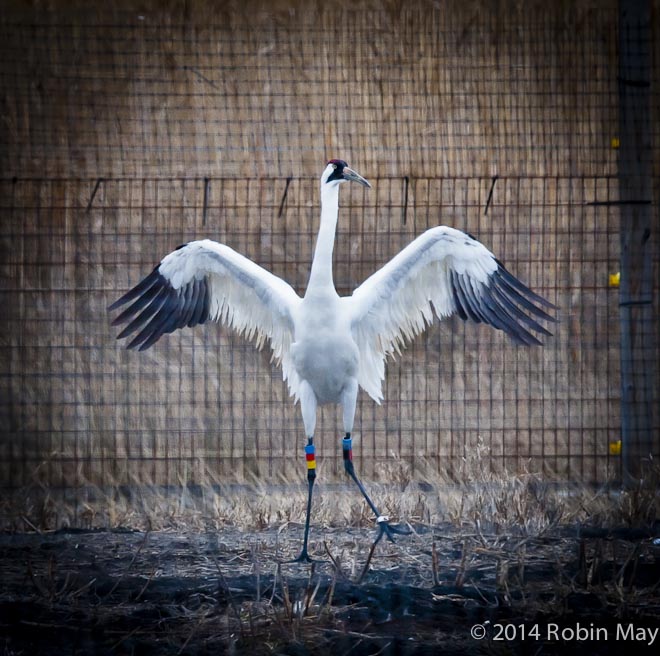 Last week's shooting of two endangered whooping cranes in Jefferson Davis Parish deserves justice. Sadly, it's not the first time this has happened in recent years.

In  2011, the Louisiana Department of Wildlife and Fisheries released 50 whooping cranes into the marshes of Vermilion Parish as part of a reintroduction program aimed at bringing the species out of endangered status; they were the first whooping cranes to inhabit the wilds of Louisiana since the 1950s. The downfall of the original population, which thrived in coastal Louisiana through the 1940s, resulted from increased human encroachment, largely through development and agricultural expansion into the bird's natural nesting habitats. Now, the species is back, but the human threat still remains, albeit in a different form than in the mid-20th century.

"Reports have the total number of [whooping cranes] at about 600 worldwide," says Wildlife and Fisheries Media Relations Officer Adam Einck who spoke by phone Monday afternoon with The IND.

Last week's shooting involved a male and female. According to Einck, the two had formed a mating relationship last year, and though they were too young to begin reproducing, they had begun crafting practice nests before being gunned down on Thursday near Roanoke in Jeff Davis Parish.

The female died from the shooting, but Einck says the male is still alive and was transported to LSU's veterinary school in Baton Rouge. It's in stable condition, though odds are it will never fly again due to the damage the gunshot inflicted on one of its wings, meaning the bird will likely spend the rest of its life in captivity, separated from its natural habitat.

"Both birds were hit with what looks like bird-shot from a shotgun," explains Einck. 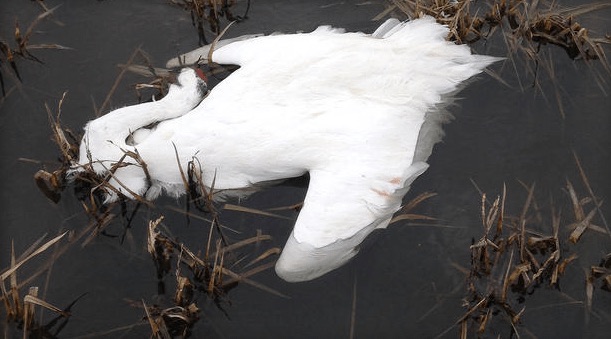 Photo courtesy of Louisiana Department of Wildlife and Fisheries

This was no accident, he says, adding that even though it is open season on snow geese, the two species bare little resemblance aside from color.

"It's very hard to mistake a whooping crane for geese or ducks. They're pretty big birds, about five feet tall, and have a wingspan of about seven feet."

Whooping cranes also have black-tipped wings, grey/black feet, red-capped heads and long, slender bills, whereas snow geese have smaller bills, are all white, and are substantially shorter and lower to the ground.

Of the 50 birds reintroduced in 2011, all equipped with GPS tracking devices, Einck says 32 remain on the department's radar.

While Einck accounts some of the drop in the reintroduced population to tracking malfunctions and death by predators, there are five known shootings including last week's incident since 2011.

"Anytime we lose one of these cranes it sets us back in our efforts to restore the whooping crane population back to its historic levels in Louisiana," says Wildlife and Fisheries Secretary Robert Barham in a prepared statement. "These were once native birds to Louisiana and the department would like to see these cranes thrive again in the future with a sustainable population."

In April 2013, a male whooping crane was found shot to death along the banks of the Red River. That killing generated donations of up 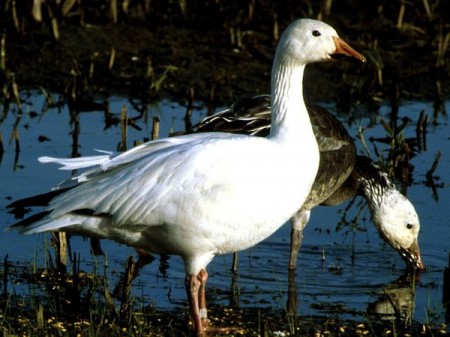 Two snow geese seen near the White Lake Wetlands Conservation Area. Snow geese are easily distinguished from whooping cranes, as they have smaller bills and a much shorter stature.

to $15,000 in reward money. Yet, according to Einck, the case still remains unsolved.

"Despite the large reward we still haven't been able to get any traction on that case," says Einck. "We're still seeking information."

Last week's incident also was no first for Jeff Davis Parish; it was the site of the first two whooping crane shootings in October 2011, which were later determined to be the handiwork of a group of teenagers.

The October 2011 case prompted wildlife and fisheries to increase its public education efforts on whooping cranes and the reintroduction program.

Unfortunately, it seems like some members of the public either haven't been privy to that message or have a disregard for the law, not to mention good sportsmanship. While the chances that last week's shooter will willfully turn themselves in are slim, The IND is encouraging anyone with information, whether you're a husband, a wife, a boyfriend, a girlfriend or even a friend, to do the right thing and help prevent any more senseless killings.