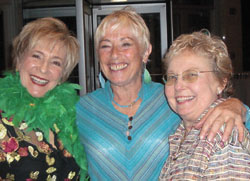 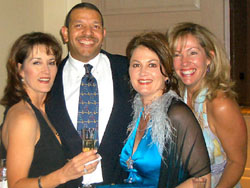 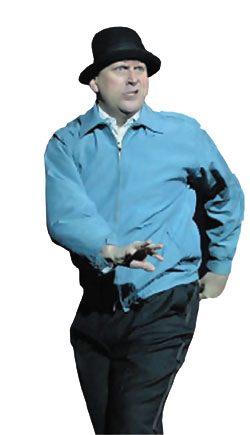 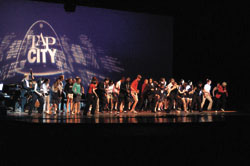 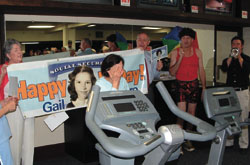 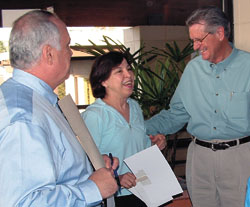 Party Girl's toes are still tappin' from Festival International last weekend and the Performing Arts Society of Acadiana's four-day Tap City marathon the previous week. I hope everyone had their dancin' shoes on. I'm looking forward to hearing all of your festival party stories, but let me tell you about Tap City. The New York dancers were picked up at the airport by Don Johnson in the Good Times trolley, their open-air transportation for the weekend. Don whisked the dancers to the tap jam at Downtown Alive!, where they later performed to some zydeco with Lil' Nathan and the Zydeco Big Timers. The dancers were also treated to an elegant dinner in the Iberia Bank lobby where they were introduced to their local tap all-star counterparts. Although the PASA stars had been practicing for weeks for their closing number in the show, they were caught by surprise when Rebecca Landry called an impromptu rehearsal as dessert was served. Barbara and Bobby McCarty, Conrad Comeaux, Joyce Bonin and Daryl Byrd and his daughter Emma enjoyed the sneak peek performance, a sign of more tap to come over the next three days. At Saturday's ArtWalk, tap legend Brenda Bufalino signed copies of her book at The Independent Weekly's offices to the tap sounds of the Immaculate Heart of Mary dancers out on the street. Sunday's Tap City performance was followed by a cast party at Michael Doumit's home, which sustained the dancers for yet one more performance for local students on Monday. I said marathon, didn't I? "Familiar faces and new audiences alike showed up for all of our tap activities making the Tap City weekend a huge, exuberant success!" says PASA's Natalie LeBlanc. Party Girl would venture to say even Natalie and PASA Director Jackie Lyle were tapped out!

Birthday girl Gail Romero of Van Eaton & Romero wasn't quite ready to tap her feet when a brass band surprised her on the treadmill at Red's for her big 65th. More than 100 agents were in on the surprise, armed with a "Social Security" birthday banner and signs with Gail's eighth grade photo, the work of Gail's business partner, Nancy Broussard. Party Girl bets Gail is still thanking her for that one! After all the commotion, Gail was able to enjoy breakfast overlooking the tennis courts. Happy Birthday, girl! Doesn't everyone need a business partner like Nancy?