As LEDA accurately predicted throughout much of the year, 2013 set a record.

Retail sales of more than $596 million in December boosted Lafayette Parish's total taxable sales to $6.02 billion, the highest year on record, according to the Lafayette Economic Development Authority. 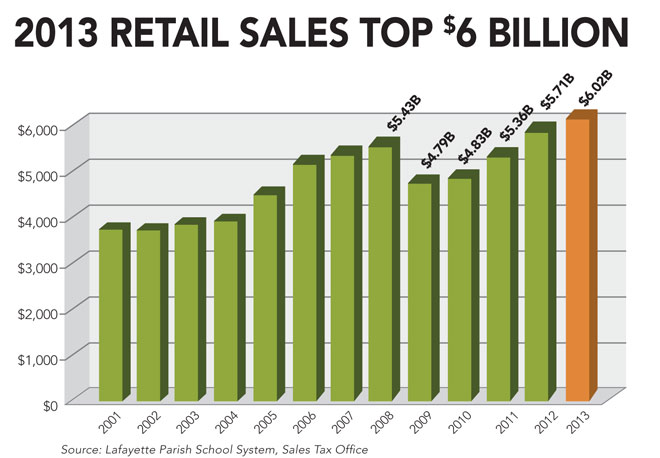 Nearly $600 million in December sales pushed 2013 to a record high.

December 2013 sales marked the fifth month of $500 million sales in 2013, the most ever in a single year, LEDA notes in a prepared release.

"The 2013 holiday shopping season did not disappoint, and total retail sales easily exceeded the $5.71 billion mark reached in 2012," says LEDA President and Chief Executive Officer Gregg Gothreaux. "Steady sales across all categories reflect the diversity and stability of the economy and the confidence of local consumers to invest in big ticket items."

Overall, miscellaneous/other, services and auto are the best performing categories in 2013 with increases of 16.2 percent, 10.8 percent and 8.2 percent, respectively, over 2012 numbers. All other categories showed increases over 2012, ranging from 4.9 percent to 2.1 percent.