After a broken leg sidelined his competitive softball playing, Mark Miller's exercise routine took a different direction. During rehab, the athlete turned to swimming to ease the pressure on his joints. Next, he added cycling and running to his regimen, becoming a world-class triathlete. Eventually, that led to Miller opening his own custom bike shop, Precision Bikes, which recently moved to a bigger space at 114 Rena Drive. 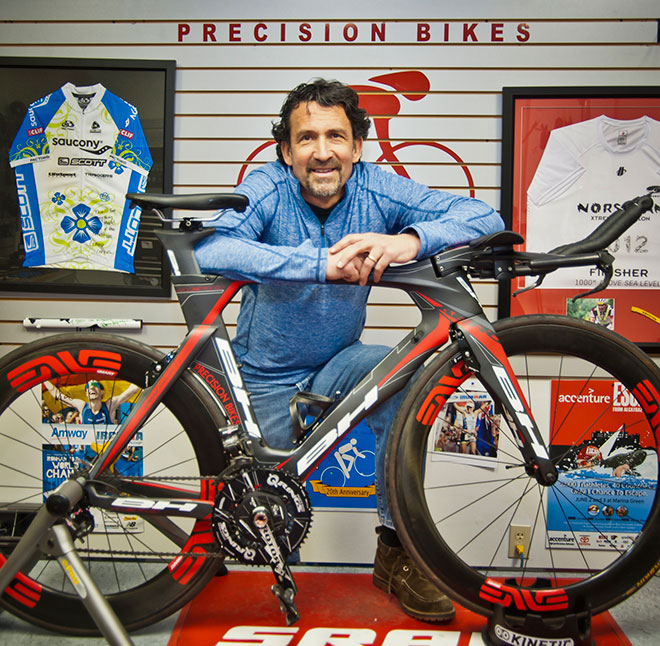 Twenty-two years ago, the then 34-year-old competed in his first long-distance race with a group of about 20 local triathletes. Gradually, Miller pulled ahead of the pack, putting 50 half-Ironmans, 27 full-Ironmans and 15 marathons under his belt, including Ironman Roth in Germany and Escape from Alcatraz. In 2010, he reached the pinnacle of the triathlete class, competing in both the Ironman World Championship in Kailua-Kona, Hawaii, and the Isklar Norsemen Xtreme Triathlon in Norway.

"The Norsemen was the hardest one for me," Miller says. "I ended up having to spend 9.5 hours on the bike that day before I started running the 26 miles. It took me right at 15 hours to finish."

Along the way, Miller befriended John Cobb, owner of Cobb Cycling in Tyler, Texas, who had worked with some of the world's greatest cyclists including Lance Armstrong and Greg LeMond. "John Cobb taught me the most about cycling and the wind tunnel," Miller says. "I owe a lot to him for taking me under his wing."

For a while, Miller trekked to Cobb's Shreveport cycling shop every weekend to work. "I just wanted to learn the cycling business, and I chased it for a long time," Miller explains. After a few years, Cobb offered Miller a full-time job running his main warehouse. A year later, Miller decided to return home to open his own store.

With the help of close buddies Frank Camalo and Dr. George Sobiesk, Miller launched Precision Cycling in a small space at 3214 Johnston St. in April 2004. Another long-time friend and co-cyclist, Rudd Vuijsters, designed Miller's website. Miller quickly became known for his custom-made bikes and personalized fittings. "I feel that I'm more of a destination place now," Miller says. "Most of what I sell is for the racer, whether it is for the road or a triathlon."

As demand grew for his customized services, Miller decided to expand to a larger location.

Last year, Miller opened at his new spot on Rena Drive. His longtime employee, Amanda Shone, came with him, along with two part-time repairmen. The 3,500-foot space has two repair stations up front and one in the rear; a showroom with racing and cruising bikes, athletic wear, shoes and accessories and a private room for bike fittings. Bike brands include QR, Cervelo, Felt, Colnago, Pinarello, BMC, Specialized and Linus. Clothing lines include Louis Garneau, Zoot, Coeur, Soas and 2XU. For shoes, Precision Cycling carries Sidi, Louis Garneau, Mavic, Specialized and Shimano.

Precision Bikes is Fit Institute Slowtwitch (F.I.S.T.), John Cobb and Retül certified, allowing Miller to custom-fit triathletes with cycles that move along with racers' bodies. "I guess the thing that I offer that nobody else does is the fitting experience by positioning people on bikes," Miller says. "Cycling is my passion now. I love going to work."

Miller's reputation in the cycling world grew quickly, attracting customers from throughout Louisiana as well as Texas and Mississippi.

Now that Miller is living his passion, his next goal is to complete the toughest challenge of them all - the USA Ultra Triathlon. Held in Tampa, Fla., this grueling double ironman consists of a 4.8-mile freshwater swim, 224-mile bike course and 52.4-mile run course. Athletes have 36 hours to complete the race.

At 55, Miller shows no signs of slowing down. "I am the last one of the 20 racers that started with me 22 years ago," he says in his laid-back, unassuming manner. "I'm now training with guys in their 20s."

Precision Bikes is open Monday, Tuesday, Thursday, and Friday from 10 a.m. to 5 p.m., and Saturday from 10 a.m. to 3 p.m., and closed Wednesday and Sunday. All fittings by appointment only. For more information, call (337) 981-7686, e-mail [email protected] or visit the website at precisionbikes.com.