Not so fast says the NFL franchise, which is challenging an area merchant's use of gold fleurs-de-lis on black coffins with the phrase "Who Dat!" emblazoned across the front. 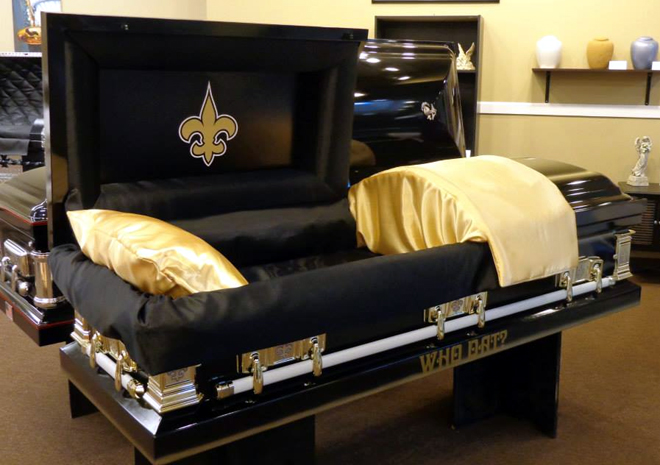 Image courtesy of 'Til We Meet Again/Facebook

It's the morbid new twist in dying devotion for sports fans: coffins bearing their favorite team logos and color schemes. But the New Orleans Saints are trying to put the kibosh on a suburban merchant's use of gold fleurs-de-lis on black coffins that also bear the popular "Who Dat!" slogan, according to an account by The Times-Picayune.

Jonathan Lahatte, who operates the 'Tl We Meet Again shop in Esplanade Mall in Kenner, thought he had a deal worked out with team after meeting with Saints personnel and agreeing to modifications to the fleur-de-lis design, the paper reports. And after the Crescent City kerfuffle a few years ago over merchants use of fleurs-de-lis and "Who Dat" in which all sides agreed the phrase belongs to everyone and the NFL subsequently backed off its heavy-handed pressure on mom-and-pop T-shirt shops, Lahatte really thought he was in the clear.

The Saints don't see it that way.