Maria Lambert has been a skincare junkie since she laid eyes on her first Clinique Three-Step products in junior high. But it wasn't until a few years ago that her love for all things skincare married with a mission to create naturally based products that work. The result is Jules and Esther, which launches this month with a full line of skincare that is 95 to 99 percent natural, with organic ingredients.

The line is beautiful, from the subtle colors and stellar packaging design to the ingredient list on the back of the jar.

"I really think it has something for everyone. For people who are very conscious about putting chemicals on their skin, this is an excellent option. It's also great for people with allergies and/or skin issues who are easily irritated by mainstream products," Lambert says. "I think it will also appeal to people who may not care about natural products, but just enjoy well-packaged and luxurious feeling skincare that's effective."

The efficacy of the natural route is what started the whole Jules and Esther endeavor. About six years ago her then boyfriend (now husband) had a wart that spread all over his hands. After fruitless attempts and two years of caustic creams and surgery and even experimental injections, Lambert turned to more natural sources. Her own sister was dying of breast cancer and found essential oils and other natural products lessened the pain and nausea that accompanied some of her treatments.

"She suggested I try finding a natural cure," Lambert says.

After research and a few attempts that got rid of the warts only temporarily, Lambert found a remedy.

"After three weeks of use they were all gone and never came back. That's when I really got into it. I suffered from eczema on my hands and face myself, so I started reading books about natural ingredients and which ones do what, and I began creating my own creams and facial oils. My skin made a complete turnaround, and I was hooked." 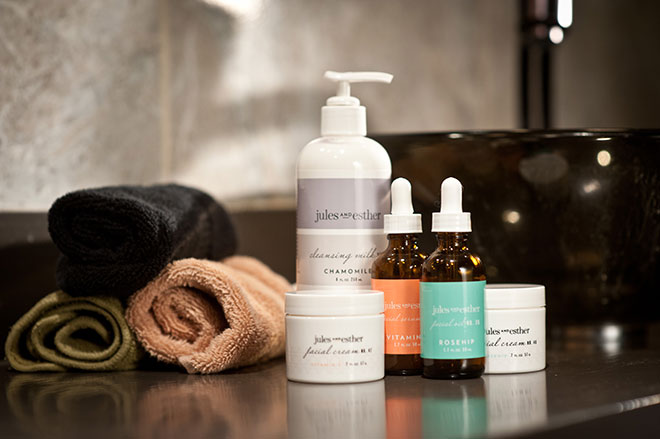 But Lambert says old habits die hard and she held onto some of her chemical-laden products for a while. Then she got pregnant. With the knowledge that 60 percent of topical products are absorbed into the bloodstream, she began creating products in earnest and a year and a half ago started researching large-scale manufacturing options. And in March all the work came to fruition; the products are now available at Refinery Downtown and online at julesandesther.com.

"I think that large companies have it drilled in our heads that you can only use certain products for oily skin, or aging skin, or dry skin, and that isn't necessarily the case," Lambert says. "Many natural skincare ingredients do double duty and are very versatile. I think another common misconception is that natural ingredients don't combat aging well, and that isn't true, either. Some of the best anti-aging ingredients - vitamin C, hyaluronic acid, retinol - are all naturally derived."

And for the record, we can say first-hand Jules and Esther cucumber eye gel smells great and works so well no one will know you stayed up late trying to make your deadline.Clearly, Lambert is a natural at the skincare gig.