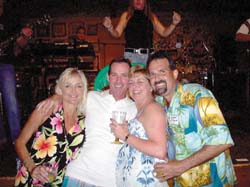 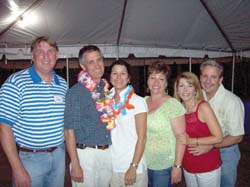 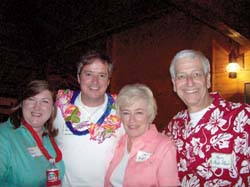 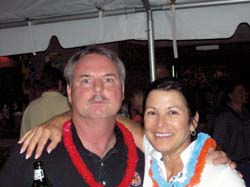 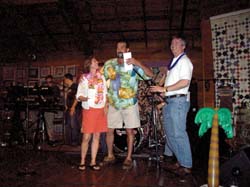 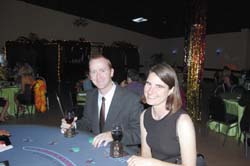 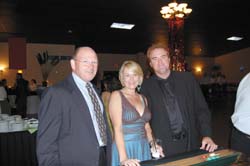 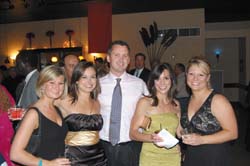 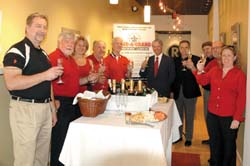 Never underestimate what the anticipation of Mardi Gras season can do to members of a Mardi Gras krewe. On Friday, May 11, The Krewe of Bonaparte held a spectacular gathering at Vermilionville, and the top of the agenda stated: "Have fun." Krewe members told me it was their last party of the 2007 season, but I don't believe that for a second. Louisiana Red not only performed some of my favorite hits but it provided the perfect rhythm for all of us to put some pep in our step. Party Girl loves being competitive in any dance contest, especially when the winner takes home a gift certificate to the Townhouse Restaurant. And I won! Woo-hoo! The co-chairs for this event, Garrett O'Connor and Jeff Raggio, and all the others members were also prospecting for additional krewe members for the new season ' wonder if they would allow Party Girl to be an honorary krewe member by continuing to invite her to their fabulous future parties?

Next stop that night was thankfully only a mile away at River Oaks. The Society of Petroleum Engineers Evangeline Section celebrated its 50th anniversary with a Casino Night. I was convinced that after winning the dance contest at Vermilionville, my luck was still on a roll. Brian Wolter, SPE Evangeline Section chairman, and Dean McPherson, SPE regional chairman, kicked off the night with a cocktail reception and a welcoming presentation. During the cocktail reception, the tables were opened (with free play) for a night of enjoyment. With no financial worries, Party Girl played until I ran out of energy. Table dealers from Eric Wilder and Cypress Bayou Casino ran the blackjack, roulette, craps, and Texas Hold 'Em tables. The Vermilion Ballroom, decorated by Flowers Etc., was adorned with brightly colored table arrangements made with orchids, birds of paradise and ginger. The food table was flanked with a colossal arrangement of hydrangea, ink-blue delphinium, yellow forsythia, red orchids and tropical bromeliads. A Chip Cabana that was sponsored by Chevron and made especially for this event had yards of black and white striped material draped on the top and sides and was tied back at the corners with tassels and black ostrich feathers. Party Girl investigated the scene and found out the scoop behind the ambiance. Right Angle Advertising created the whole room design concept ' they do have an angle on everything! Kudos to Halliburton's Corinne Cotton, who exquisitely orchestrated the event from beginning to end.

Speaking of bets and lucky people, I'm wagering that the new campaign for UL athletics will be a winner. At a recent committee gathering, UL Athletic Development Coordinator Gerald Hebert announced the launch of the UL Athletic Scholarship Give-A-Grand Endowment Campaign. Ragin' Cajun Athletics is asking for its fan base to support this program and create athletic scholarships for student athletes to help UL teams become even more competitive in the NCAA. The success of this effort is being guided by an honorary committee of 24 people, let by Chairmen Charlie and Del Goodson.

"We feel that if the fans of UL athletics come together, we can make a difference for the teams we cheer for and the university we love," says Charlie Goodson. "Our student athletes work hard all year long, and this effort is about returning the favor." A $1,000 donation will automatically place a donor on Goodson's Honorary Committee. The initial members include David K. Fontenot, Roder Russo, Joel Authement, Brother Marine, John W. and Tanya Nolin Jr., Robert L. Manuel, Terry Fontenot, Mike Helo, Ronnie Russo, Tom and Karren Hays, Michael and Jaci Russo, Harry and Dru Patin, Kenny and Virginia Crockett, Jamey Monceaux, Pat and Donna McDonald and Mark W. Judice. I know I've said before that pink was my favorite color, but I think I look better in Red ' Ragin' Cajun Red. Geaux Cajuns!