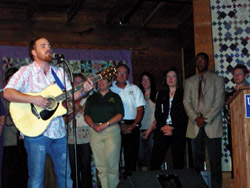 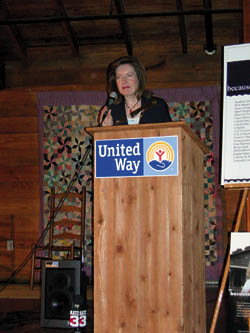 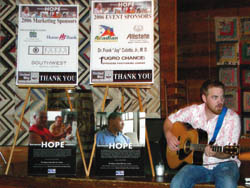 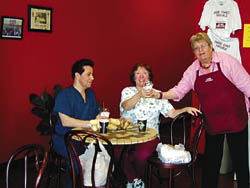 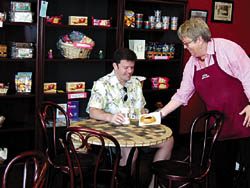 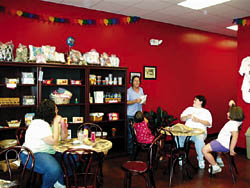 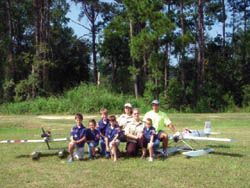 After a couple of "touchdown" years with football players Jake Delhomme and Kevin Faulk, United Way of Acadiana changed its tune for this year's campaign kickoff. Carencro native and rising music star Marc Broussard is the 2006 spokesman and an appropriate one as United Way spreads a message of hope with the anniversaries of hurricanes Katrina and Rita. Broussard gave a special performance at the kickoff celebration Sept. 7 at Vermilionville, performing two songs, "Hope For Me Yet" and "Home." His father, Ted, played the guitar with him on "Home," and United Way pacesetter companies were invited on stage for "Hope For Me Yet." Margaret Trahan, president/CEO of United Way of Acadiana, and Kathy Bobbs, campaign chairwoman and CEO of Women's & Children's Hospital, addressed attendees, announcing this year's campaign theme as "Hope Matters," with a campaign goal of $3.3 million. Party Girl predicts a banner year for the organization!

Celebrating a banner year Sept. 9 was Euro Breads, the European bread and pastry shop in The Village off Gloria Switch Road. Ingrid and Peter Czichomski, who call themselves late blooming entrepreneurs from overseas who came to America to make their dream come true, marked one year of selling wonderful artisan breads, scones and danishes, as well as and plenty of coffee and tea. "When most retire and relax, we began our biggest venture, refusing to let past trials and errors discourage us," say the Czichomskis. "We sought guidance and assistance and found it in warm, welcoming arms right here in Lafayette."

The Boy Scout Troop 1412 Rayne Cub Scouts also got a warm welcome recently, venturing out to the annual Float and Fly by the RAMS RC Club of Crowley. The boys got to watch hundreds of planes take off out of the water, in addition to helicopters and gliders. Participating in the Sept. 2-3 event were leaders Dineen Constintan and Wendy Moore and cub scouts Kline Gates, John Daniel Gates, Drake Constintan, Ivy Thibodeaux and Nicholas Moore. "The event was a huge success, and the boys have been invited back to participate and learn from these hobbies," says Wendy.