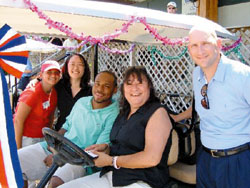 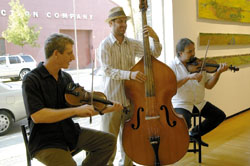 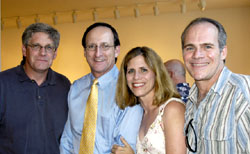 As the summer temperatures heat up, so do the parties, mes amis. Most of you are staying indoors for themed fêtes and celebrations, but a few brave partygoers have ventured outside. Lafayette Community Healthcare Clinic's Healthcare Classic last month combined a day of golf at The Farm with running back Kevin Faulk of the New England Patriots for a day of fun in the sun. Supporters of the clinic turned out on the green, and Farm owner and professional golfer Allison Ramsay even got out there for a round. The golfers were treated to a steak dinner at the end of the day and came forward to receive their awards. Congratulations to Amedysis for first place, Affordable Dentures for its second place win and Louisiana Healthcare Group for finishing third. The event raised more than $26,000, so congrats are also in order to LCHC!

The UL and TV-3 communities came together at the home of Adam Lemoine to give Candice and Lewis Gale a grand sendoff to Utah. The bottom floor of the home was transformed into "gale-atoire's Bar & Bistro," while the upstairs became "ULL Uptown Lounge," in memory of Lewis' post at the business college (ULL doubled as an acronym for "U Leavin' Lafayette"). "We wanted to have a casual party with a Cajun flair," says Valerie Keller, co-host with Adam and Sam and Ellen Wright. "They had been packing for weeks and were hitting the road within 48 hours of the party. We wanted this to be their last hurrah." Many UL folks turned out to say goodbye, and the KATC crew showed up after the 10 p.m. newscast. Good luck Lewis and Candice, and I hope you'll be back to visit!

Some Lafayette folks headed to New Orleans for the opening of Elemore Morgan Jr.'s and Debbie Fleming Caffery's exhibits at Arthur Roger Gallery. Elemore's beautiful Louisiana landscape paintings hang alongside Debbie's photographs documenting the state's sugar cane industry and will be up through July 23. Several locals turned out to visit with the two great artists, including Debbie's father Judge Robert Fleming, Elemore's right-hand man Lee Ray J. LeBoeuf, Tommy Hebert, Herman Mhire and Cordell Dartez and his family. Michael Lyle, who was in town from California, attended with his sister Jackie and Conrad Comeaux. Cajun band Jonno & Bayou DeVille set the mood for the opening, playing twin fiddles and bass in one of the gallery's huge picture windows. Party Girl recommends making the drive, and while you're there, check out local exhibits at the Ogden. You can even treat yourself to some Tsunami sushi at the Shaw Center in Baton Rouge on the way.