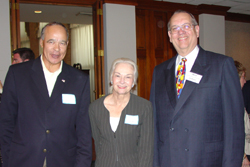 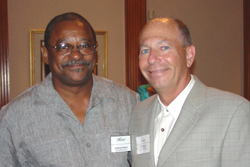 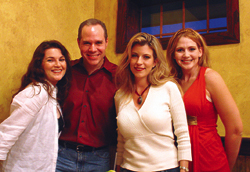 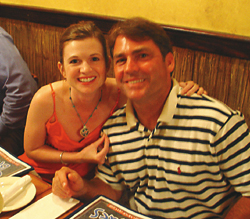 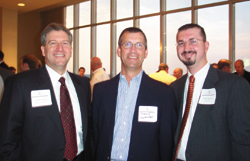 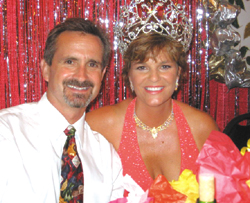 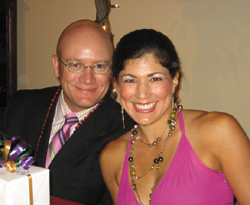 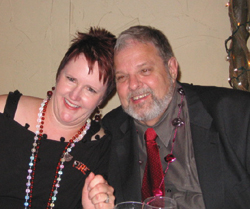 I'm never one to miss a party, but I've had enough of hurricane-related parties this year. Let's hope that the rest of hurricane season, post-Rita, is quiet and we can get back on track for the fall fundraisers and fêtes. In the meantime, the Chamber of Commerce is still working with New Orleans business owners, and its reception last week was a huge hit. From Taylor Energy matriarch Phyllis Taylor to Rock 'n' Bowl owners John and Johnny Blancher, the Crescent City business community was well represented at the Petroleum Club. The group shared stories, asked questions and got to unwind, if only for a few hours. Also in attendance were MakeBuzz owner Christopher Skinner and legendary Galatoire's waiter Johnny, along with locals Doug Menefee, Wilfred Pierre, Marc Mouton, Flo Meadows and Debbey Ryan, who was also celebrating a birthday. Happy Birthday, Debbey! Also donating to the relief cause was the September edition of the Rhonda-Maria Experience at 307 Downtown. The monthly poetry showcase passed a hat for Red Cross efforts at the Cajundome and collected $216. Kudos to Rhonda and Maria for contributing to the cause!

Despite all of Lafayette's hurricane-related activity, people are still having birthdays, dinners and banquets. Greg Daigle's 36th birthday party at Coyote Blues included more than 40 guests for dinner, followed by a night of dancing downtown. Friends Katie Ferguson and Terri Broussard hosted the fête and also brought in a chocolate cake with raspberry preserve and whipped chocolate icing drizzled with fudge from Crystal Weddings Bakery. The cake was almost as sweet as Greg's friends gathering to celebrate! The Young Lawyers Association also got together recently to install new officers and chairpersons at the IberiaBank Tower. Food by iMonelli and a martini bar made for quite a gathering.

And reminding us that it's never too early to begin preparing for Mardi Gras, the Krewe of Xanadu recently held an announcement dinner at River Oaks in preparation for the season. Xanadu's theme this year is "Some Like It Hot!" and the event announced "hot" plans. Kim Bartels is the 2006 queen and looked the part in a hot pink, rhinestone-studded gown. Bruce Bartels is a royal consort, and Captain Naomi Maraist is preparing for her role as "Elvisa" Presley, a hunk of burnin' love. Other stars include Alison Howard as "Hot Spot," a Las Vegas showgirl, Jackie Robeck as "Firecracker" and Margaret Trahan as "Hot Off the Press." Party Girl will toast to that!