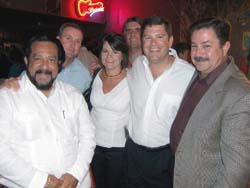 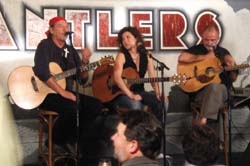 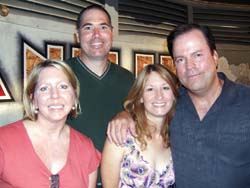 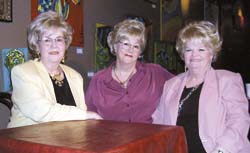 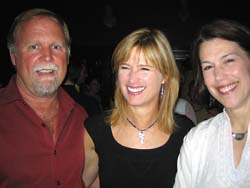 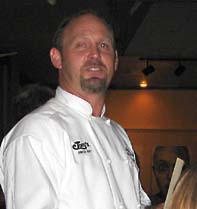 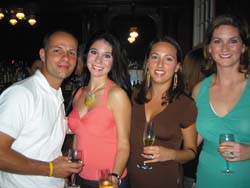 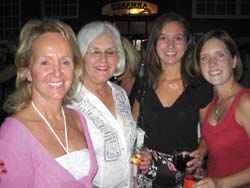 Party Girl can always spot the signs of a good party, no matter where it is. Of course, it's easy to do when it happens right outside your door. That was the case recently when two huge trucks ' one advertising a DJ and the other a TV station ' surrounded by yellow caution tape appeared right outside The Independent Weekly's offices on Jefferson Street. What was our neighbor Antlers up to? A quick call to my friend Johanna Villarreal at Downtown Development confirmed Cardiovascular Institute of the South was presenting a live taping of some Nashville songwriters that evening, with hopes Country Music Television would air the filming. I had to be there! When Party Girl arrived, Antlers was packed with tables and guests, all intently watching the three songwriters on stage. TV cameras strolled the room, while Alex Harvey, Georgia Middleman and Tony Haselden entertained the crowd with songs about champagne, Billy Ray Cyrus and the thrills of being single. His head covered in a red bandana, Harvey received a standing ovation for his version of "Delta Dawn." And Middleman's "Dearly Beloved," recorded by Faith Hill on her new album, was just as well received. The highlight of the evening was a performance of "New Orleans Ladies" by special guests Louisiana LeRoux. In the words of Haselden, "It's usually hard to train an audience to be quiet and still enjoy the show, but you guys already knew how to enjoy the hell out of this."

If you don't hear live music, then cocktails and gourmet food are another sure sign of a party, and Clementine in New Iberia was the place on July 12. The restaurant brought back its popular guest chefs, starting that evening with Gary Schenk from Joey's Deli. The event began with libations in the bar, then proceeded to the dining room for an impressive spread. Schenk visited the countries of New Zealand and Spain for wine-pairing inspiration and started the meal with an appetizer of Bayou Pearls with Roasted Red Pepper Aioli. The soup course, Corn and Tomato Bisque with Smoked Tasso, was followed by Schenk's entrée of fresh pan-sautéed redfish set in beurre blanc topped with toasted almonds and kiwi, accompanied by cauliflower soufflé and asparagus tips. But the pièce de resistance was the dessert: Blackberry and Brie Bread Pudding. "Everyone had a great time, and the dessert was to die for!" says Clementine Manager Sarah Peltier. If you missed the event, Clementine's guest chef dinners continue every Wednesday through Aug. 9.