The popular bistro-slash-music venue is set to appear Thursday before the state's office of Alcohol & Tobacco Control to prove it's a restaurant and not a bar.

[Update: We spoke with ATC Commissioner Troy Hebert this afternoon shortly after the hearing with Artmosphere. Hebert tells us the bistro was in clear violation of its restaurant license and was fined $1,000 dollars. However, Hebert says he gave the venue 90 days to correct the discrepancy between food and alcohol sales. If, after 90 days, Artmosphere remains in violation it will lose its license to serve alcohol. If Artmosphere is found to be in compliance with the terms of its license, Hebert says, it will be placed on a six-month probationary period and will have to report to ATC monthly to demonstrate continued compliance.] 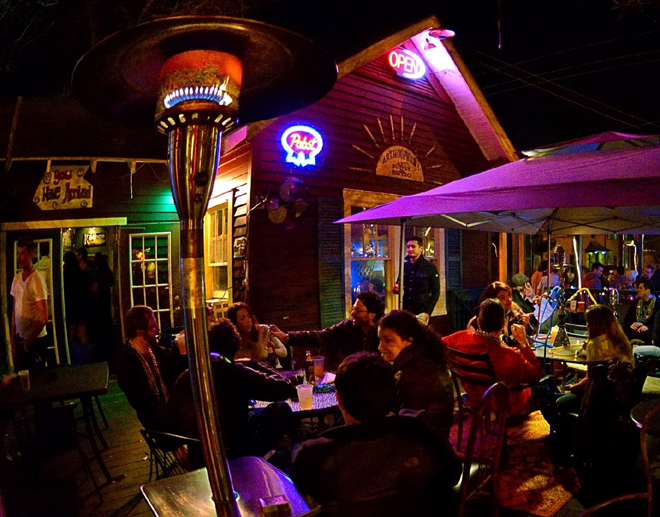 A typical weekend night at Artmosphere: live music indoors and patrons enjoying themselves outside on the deck

The popular bistro-slash-music venue at the corner of Johnston and Convent streets downtown is set to appear Thursday before Commissioner Troy Hebert, head of the state's office of Alcohol & Tobacco Control, to prove that it's a restaurant and not a bar. If Artmosphere owner Beryl Kemp can't make her case, the venue will be in jeopardy of losing its liquor license, which would more or less be a death knell for the club's after-dark activities centered around live music and young people imbibing and dancing in the converted mid 20th century house.

Over its 10-year history Artmosphere evolved from an art gallery and bistro into a live music destination that is beginning to rival nearby Blue Moon Saloon. A few years ago Artmosphere added a nice, intimate indoor stage with a quality public address system and began booking more regional and popular local bands. The problem is, the club operates on a restaurant liquor license, meaning 51 percent of its sales must be for food (or, conversely, no more than 49 percent of its revenue can come from alcohol sales). The club has an extensive lunch menu, but its nightlife component has taken off over the last five or so years due in large part to Kemp's investments in renovations and a good sound system.

Hebert tells The IND that the case "probably won't be resolved today because whatever they bring [to prove their case] we would want to verify." That verification could also involve ATC checking with local alcohol wholesalers to find out how much booze the venue is ordering.

Hebert adds that if Artmosphere is found to be in violation of its license, revoking the license may not necessarily be his office's first recourse. "Depending on their record [of past violations], I may give them some kind of probationary period and say, OK, you have 90 days to turn this thing around'" he explains. Turning it around, as Hebert puts it, would involve Artmosphere increasing its food sales to reach the 51 percent threshold, assuming it's not meeting it at present.

On Wednesday, Kemp put out word on social media: "We are humbly asking for your HELP," an e-flyer that appeared on Facebook reads. "We will be going before the commissioner to prove our sales as a restaurant to keep our license Thursday (after ten years of serving great food made from scratch). Please EAT at ARTMOSPHERE. Now / Keep us in your thoughts and prayers, this means a lot to all of us."

Check back with theind.com later for an update on today's hearing.