Kevin Naquin - yeah, the Lafayette City-Parish Council chairman - and his Ossun Playboys will celebrate the release of their latest record Saturday night at the Acadiana Center for the Arts.

Award-winning accordion player and Cajun band leader Kevin Naquin along with his Ossun Playboys band have a new record out. La Vie Est Jamais Garantie (Life Is Never Guaranteed) will hit the record stores - it can be pre-ordered online - on March 18. Its 14 songs swing back and forth from waltzes and two steps, standards and even Cajun versions of time-honored country-and-western tunes.

Naquin broke on the scene in 2000 by sweeping most of the major categories at the Cajun French Music Association Awards following his debut record, and he and his band have only gotten better and more mature over the course of eight records.

The musicianship on Garantie is impeccable as always, and Naquin's penchant for taking risks while honoring tradition is laudable.

Naquin of late is making a name for himself as a politician, serving his first term as the councilman for District 1 (northwest Lafayette Parish) on the City-Parish Council; he was even elected council chairman for a one-year term in January and is already making waves. But he's a Cajun accordionist first, and a damn good one, as far as we're concerned. 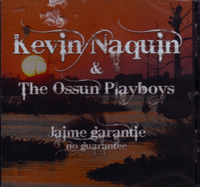 Kevin Naquin & The Ossun Playboys will celebrate the release of their new record on Saturday night when the Acadiana Center for the Arts rolls back the seats and makes a big dance floor in the Moncus Theater. The concert begins at 7:30 p.m. Admission is $15 at the door; $12 for AcA members, kids and senior citizens. This is an all-ages, non-smoking event. Just bring comfortable dancing shoes.