Although Greg Gachassin's attorney attempted to argue that his client should pay only a $10,000 fine - if he should pay anything at all - Louisiana Board of Ethics attorney Michael Dupree told a three-member panel of the Ethics Adjudicatory Board that it should levy the maximum penalty. Doing so is in line with why the Louisiana Code of Governmental Ethics exists, Dupree insisted at a March 13 hearing in the case, saying it's the only way to deter future violators.

"He drove the bus and made sure there was plenty of room in the back to put the cash," Dupree told the trio of administrative law judges. That cash amounted to $1 million, which the Ethics Board is seeking to recover in penalties, plus one-half, for a total of $1.5 million. In court filings the board also says it's entitled to recover $10,000 each time Gachassin violated the code - an amount that could climb into the hundreds of thousands. The Ethics Board also has the authority to impose restrictions on Gachassin to prohibit him from entering into business relationships with his former agency, which in this case is the Lafayette Public Trust Financing Agency (inexplicably, the court documents do not indicate the board is seeking to do so).

If the Ethics Board recovers anything close to what it is asking for in its Motion for Summary Judgment (the board has never won a case on an MSJ), the amount would be precedent-setting.

Ethics records show that the largest fine ever handed down, $650,000, was in 2001 against attorneys involved in tobacco litigation. Read the opinion here.

At the March 13 hearing, Dupree and fellow Ethics Board attorney Suzanne Mooney made a case for how the Lafayette developer used his position on a public board "to line his pockets with money," calling Gachassin's and his company's violations "both vast and egregious" in court documents. "It is a simple case," Mooney said at the hearing. "In this case, the Louisiana Code of Governmental Ethics was created to prevent exactly what happened here."

In June 2012 the Ethics Board voted to charge the Lafayette developer and his Cartesian Company with violating the state's Ethics Code while he was a member of the Lafayette Public Trust Financing Authority's board of trustees.

In its April 2011 cover story "How Gachassin Games the System," The IND spelled out how the local developer laid the foundation for lucrative work with the LPTFA while he was serving as an appointed member of its board of trustees from November 2003 to November 2009. State ethics laws prohibit an appointed board member, or a legal entity in which he has a substantial economic interest, from bidding on, entering into, or being in any way interested in a contract, subcontract or transaction that is under the supervision or jurisdiction of the agency or public servant. The prohibition extends to the public servant and his dealings with the public board for a period of two years (the Lafayette City-Parish Council appoints LPTFA trustees).

The Ethics Board says in court documents that Gachassin was "instrumental" in creating both the Villa Gardens and Cypress Trails low-income housing developments, noting minutes from LPTFA's meetings reveal that he used his position as a trustee to assist in the "conceptualization, planning, creating, execution of, and funding" for the projects. The ethics investigation found that on Nov. 1, 2009, Gachassin, as president and owner of The Cartesian Company, entered into consulting contracts with both the Cypress Trails Limited Partnership and Villa Gardens Limited Partnership.

"The LPTFA board minutes reflect that the Cypress Trails and Villa Gardens projects were the subject of transactions before the LPTFA on numerous occasions before November 1, 2009," with each vote constituting a violation of the state's Ethics Code and potential $10,000 penalty per violation, the state's motion reads. Also on that same November day, according to the court record, the LPTFA created Cypress Trails Corporation as an "instrumentality" of itself: "As such, the Cypress Trails Corporation became an organizational unit of the LPTFA."

Three days after executing the contracts, on Nov. 4, 2009, Gachassin, then chairman of LPTFA, voted for the public trust to move forward on the projects. He also voted to "recast" the $460,000 loan from LPTFA to the Lafayette Housing Authority for Villa Gardens, meaning what was supposed to be a loan with 3 percent interest was restructured to a long-term, no interest loan to be repaid from Villa Gardens' cash flow.

Thirteen days later, on Nov. 17, Gachassin resigned from the LPTFA board. And just two days after that he collected his first $50,000 payment from Villa Gardens. In the two years following his departure from the public board, he appeared before the board three times to update it on the progress of Cypress Trails. Again, the Ethics Board argues that each appearance before the LPTFA board constitutes a violation, as does each submission to both projects for payment and each renegotiation of his contracts on the Villa Gardens and Cypress Trails projects (which were numerous). All of this was done during the two-year prohibition.

At the March 13 hearing, Dupree called BS (he actually called it "baloney") on some of the arguments put forth by Gachassin's attorney, former longtime Ethics Administrator Gray Sexton of Baton Rouge. Sexton claims his client was improperly charged because only seven of the board's 11 members voted, rather than nine - which both sides concur is only required if the board agrees to meet "en banc." But Dupree pointed to a section in the Ethics Code stating that six board members constitute a quorum when there is no agreement to meet en banc. 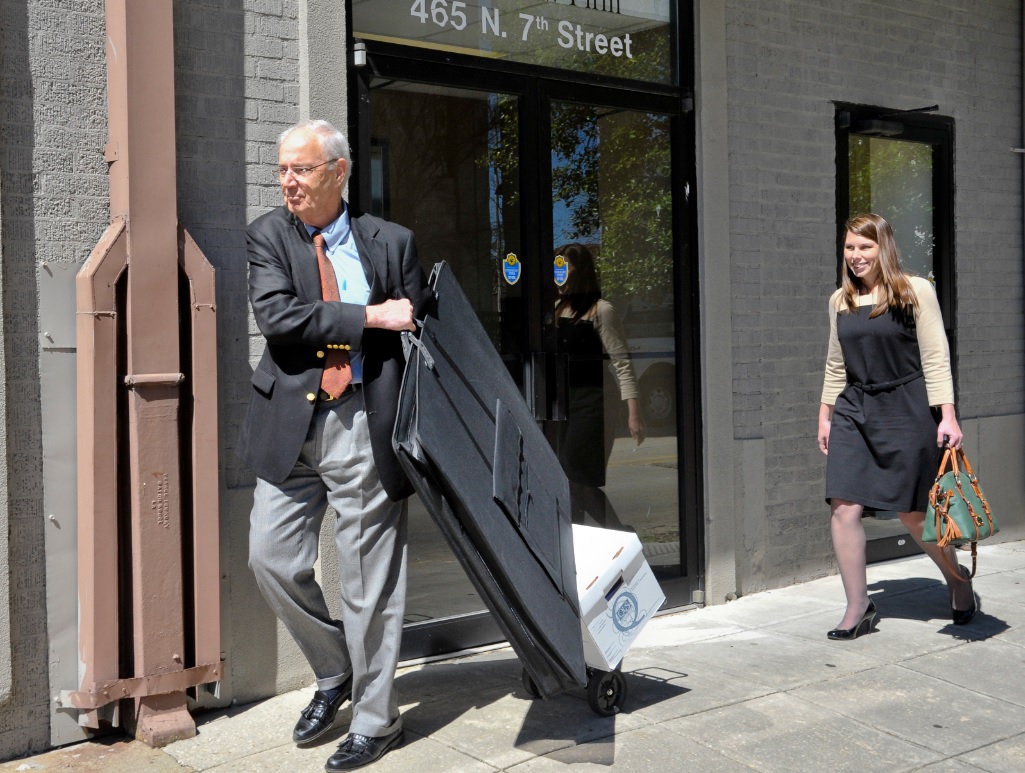 Baton Rouge attorneys Gray Sexton and Jennifer Jackson argued that their client, Greg Gachassin, was not a public servant when he chaired the LPTFA and used his position on the "public" trust's board to earn $1 million in development fees. For four decades, Sexton headed the very agency that is accusing Gachassin of ethics violations.

Another argument Dupree effectively shot down involved Sexton's claim that the LPTFA is a private trust. The Ethics Board attorney argued that the trust was created in 1979 by a city of Lafayette ordinance and that its original documents state that it is subject to public records laws, open-meetings laws and the Code of Ethics. Dupree also pointed to numerous instances in which the word "public" is used in the original documents (its Trust Indenture authorizes it to pursue a wide variety of purposes deemed "to be essential public functions conducted in the public interest") and noted that it also is governed by Louisiana's Public Trust Law (Title 9).

"The trust documents tell you what we are doing is in the public interest," Dupree said. "Mr. Gachassin [was] indeed a public servant."

The judges took the matter under advisement and could rule within a matter of weeks.

Gachassin, accompanied at the hearing by his father, attorney Nick Gachassin Jr., a former first assistant attorney general for the state, declined to comment to local media.