A disturbing trend has taken hold of academia in recent years as Big Oil exerts more and more influence on scholarly research.

David Dismukes is the associate director at the Center for Energy Studies at LSU and author of a controversial 2012 study claiming the state's hostile legal climate has resulted in 30,000 lost jobs and about $6.8 billion in drilling revenue.

Dr. David Dismukes, right, appeared in Baton Rouge as a panelist Tuesday for a
Grow Louisiana Coalition forum hosted by the Center for Energy Studies at LSU, where he serves as associate director. Interviewed by The IND before the discussion began, he declined to comment on
his controversial study linking the state's legal environment to lost jobs and a slowdown
in drilling activity.

The Dismukes study, "The Impact of Legacy Lawsuits on Conventional Oil and Gas Drilling in Louisiana," has served as one of the main weapons in the arsenal of the Louisiana Oil and Gas Association's battle over so-called "legacy lawsuits" and more recently with the New Orleans levee board over its lawsuit against 97 oil and gas companies for decades of destruction wrought on our coastline.

But neither lawyers representing landowners with claims against oil companies nor Dismukes' academic peers are buying his study. And Dismukes himself isn't talking.

Since the release of his revised report in 2012, Dismukes has done everything he can to avoid being questioned on the validity of his research, claims attorney John Carmouche of Talbot, Carmouche & Marcello, the firm now representing Jefferson, Plaquemines and Cameron parishes in a series of coastal zone management lawsuits filed against the industry.

A number of problems with Dismukes' study have been raised by his academic peers, including an April 2012 response published by ECONorthwest economists and University of Oregon professors/PH.D.s Ed Whitelaw and Bryce Ward. Their response is a scathing review of Dismukes' work, which they call a "fatally flawed" study that puts bias before scholarly methods.

According to Dr. Robert Gramling, a retired UL Lafayette professor of environmental sociology and author of a number of books on the oil and gas industry, the only flaw with the ECONorthwest review is that it doesn't go far enough.

Also problematic, says Gramling, is that Dismukes' study splits Louisiana into two regions - north and south - which he uses to compare to other states in their entirety. The activity in those other states is based on unconventional drilling, or fracking, which also has resulted in a boom in North Louisiana. That, however, is not the case for South Louisiana, where the activity has solely been focused on conventional forms of extraction. 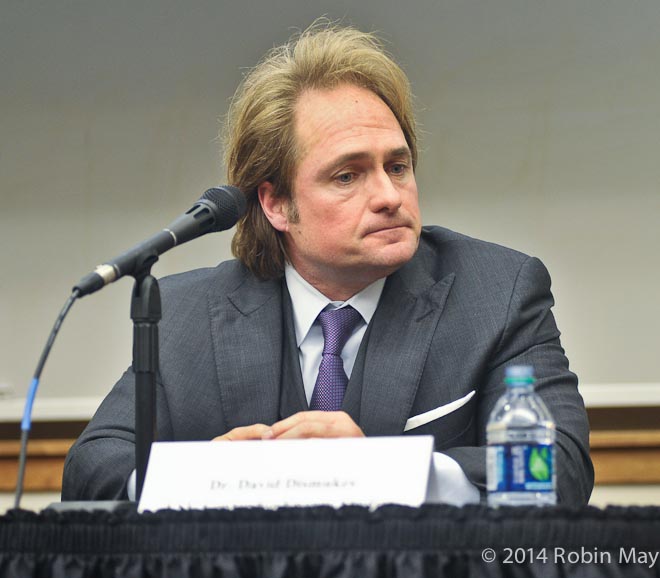 Carmouche says since 2012, his firm has attempted to subpoena Dismukes to give a deposition on his study. After a series of unsuccessful attempts, Carmouche says his firm hired Kenneth Ricks, a private process server, who paid Dismukes a visit at his office on April 3, 2012.

"[Ricks] goes to Dismukes' office, asks the receptionist to speak with him, she recognizes this is someone to serve him and comes back saying he's not here anymore," recalls Carmouche. "[Ricks] then sees Dismukes running out the back door, so he runs out, gets in his truck and pulls behind Dismukes to block him in, but Dismukes looks in his mirror, starts his car and runs his car into [Ricks]."

According to an accident report filed by the Baton Rouge Police Department, here's how the responding officer described the incident:

[Ricks] explained he was stopped behind vehicle 1 because he was serving David DISMUKES with a subpoena. [Ricks] further informed me [Dismukes] backed out of the parking space in an aggressive manner in an attempt to avoid being served a subpoena.

"You've got [LOGA's] Don Briggs and others in the industry who keep talking about this guy and his report, so all we want is for him to come testify and explain the report," says Carmouche. "What's the big deal, he wrote the report, he's an expert in economics, he testifies in court all over the country on other matters, so why's he running?"

The reason behind that reluctance is best summed up through a series of 2012 emails - released by LSU following a public records request from Carmouche's firm - between Dismukes, his research assistant and oil and gas industry officials.

In a Feb. 5, 2012, email to his research assistant, Chris Peters, a seemingly frustrated Dismukes writes: "Here's the [email protected]### legacy report !!! aghhh ... If we can get this spinned back around and out tomorrow I would be so grateful --I want these people off my back so I can get back to other things."

The identity of "these people" is revealed in a follow-up email Dismukes sends to Peters on Feb. 6, writing: "Chris how is the legacy stuff going? I need to get something out to Exxon and Chevron today."

Responding to a question from Peters on the study's fuzzy data, Dismukes sends an even more revealing email on Feb. 6: "I would say 'various filings' as the source ... I got the data from Exxon so not sure how I want to fess up' on where that info came from."

In an earlier email to Peters, sent Jan. 20, Dismukes is clear about his intention for the study: "[C]an you combine the south LA and the offshore - call it South LA and Inland Waters' - I want to be a little ambiguous."

The study immediately drew criticism with its release on Feb. 28, and in a March 1 response email to Exxon's Jeff Copesky, Dismukes asks for post-2007 data from the company to shut down arguments that the study is flawed because it centers on the years impacted by hurricanes Katrina and Rita, which had a devastating impact on South Louisiana's drilling operations. Dismukes writes to Copesky: "If you all could get me that extra data that I sent you a request about I could clearly shut this line of argument down since I could take the model out to 2010."

Dismukes appeared as a panelist Tuesday for a Grow Louisiana Coalition forum hosted by the Center for Energy Studies at LSU. The IND spoke with Dismukes before the event, but he declined comment on the legacy lawsuit study saying, "I can't talk because of a number of legal reasons."

Dismukes deferred comment to his attorney, John Murrill. According to Murrill, he was retained by LSU in 2012 following the attempts by Talbot Carmouche to subpoena Dismukes.

"When the university and Dr. Dismukes were subpoenaed I was retained to defend against both of those subpoenas since neither was a defendant in a lawsuit; they were simply subpoenaed to give depositions in a lawsuit against other parties," says Murrill, who spoke by phone Wednesday with The IND. "The university is interested in protecting the academic freedom of its faculty members, but given the fact that Dr. Dismukes may be subject to future subpoenas I don't want to comment on that any further."

Murrill says in 2012 he filed a motion to quash the subpoenas against Dismukes and LSU, and so far neither has been deposed.

While Dismukes has so far seen no backlash from the university's administration over the industry's heavy-hand in his research, his case is not unique.

In 2012, UT Austin's Energy Institute released a study claiming hydraulic fracturing had nothing to do with water contamination. Controversy quickly followed when it was discovered that the study's author, professor Charles Groat, was also sitting on the board of Plains Exploration and Production (now Freeport McMoran Oil and Gas, which is headed by Lafayette native Jim Flores) and had taken in about $1.5 million in cash and stock compensation from the company within a five-year time frame, according to an investigation by StateImpact Texas, a reporting project of NPR member stations. That discovery prompted Groat to "retire" from the university, and the controversy also resulted in the resignation of the Energy Institute's director, Raymond Orbach. The university responded by revising its conflict of interest policies and restructuring the Energy Institute.

UT Austin Provost Steven Leslie responded to the controversy in an interview with StateImpact Texas, saying, "These are matters that affect the credibility and the public trust relating to the university."

A similar situation unfolded in November 2012 at the University of Buffalo over a study released by the school's Shale Resources and Society Institute claiming natural gas drilling operations at the Marcellus Shale in Pennsylvania had become safer because of increased regulation. What the study did not disclose was the connection between its authors and the industry. Following an internal investigation launched by an industry watchdog group, which claimed the study's authors used "flawed methodology," "biased language and industry spin," and an "artificial peer review' process," the university responded by shutting down the institute, according to StateImpact Pennsylvania.

The Dismukes study and the controversial reports released by UT Austin and the University of Buffalo have many similarities: All three attempted to hide the influence of the oil and gas industry and employed biased language and flawed methodologies, and each lacked a legitimate peer review process.

But, at least for now, the one major difference between these three cases is that LSU is backing the industry's heavy-handed role in its professor's research.