There is a psychology to investing.

If you had bought an S&P 500 index fund 30 years ago and somehow had not opened your statement until recently, you would have made two discoveries: Each dollar you would have invested would now be worth more than $23, and you would rank as one of the greatest investors of all time, having outperformed virtually every single mutual fund and money manager in existence.

Of course no one did that. Why? Even if you didn't need to spend any of that money along the way, it is virtually impossible to sit completely tight - unemotional and objective - through the storms and vicissitudes experienced over the last 30 years. 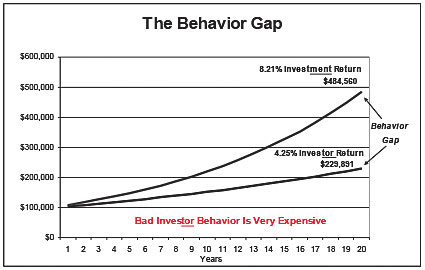 But if you had

We people are emotional things. We have an embedded DNA structure that is wired for survival. Good for making it on the savanna plains, not so good for investment results.

Financial writer Carl Richards has coined the term "behavior gap," which highlights the damage that we investors do to ourselves, due to bad investment behavior. It is the tangible cost of losing discipline and not adhering to a well-designed, long-term investment plan.

Each year, Dalbar Inc. publishes information obtained from a number of leading brokerage companies that compares the gains offered by the market (the investment gain) to the actual gains realized by investors (the investor gain). The accompanying chart shows the most recent 20-year results.

It turns out that while the investment gain available to anyone who cared to reach for it was on the order of about 8 percent, the actual return people realized was closer to 4 percent. That difference is not just big - it is GINORMOUS. Bad investor behavior is very expensive.

As I said earlier, we are emotional creatures. And, unfortunately, we are constantly bombarded with news, magazine covers, best-selling books, annoying brothers-in-law and any number of outside stimuli that push/scare us into making financial decisions that we probably should not make (in both directions - Sockpuppet.com anyone?). 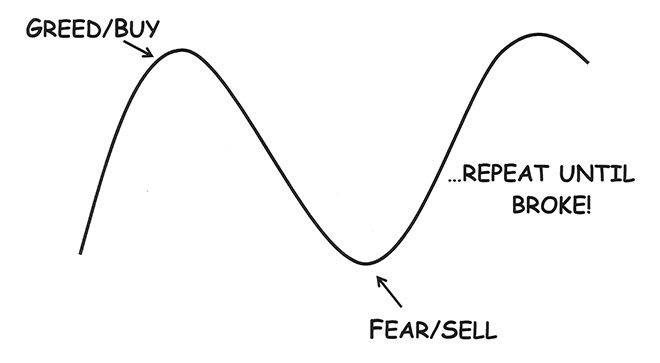 If that looks familiar, there is a solution to this problem.

First, tune out the outside distractions. Realize that most financial news is for entertainment and not enrichment (want to prove that to yourself? Go on a news fast. Don't read any current financial publications for at least six months. But do save them to be read later. You'll be amazed at how irrelevant most "breaking news" stories actually turn out to be).

Second, you need to develop a really well-thought-out investment plan, one grounded in long-term research that has delivered results over many types of market and economic climates. One that can be simply defined, explained and defended.

Third, once you have such a plan, implement it with rigor and discipline. Stick to it. Let it do its thing. Rebalance occasionally as needed when some investments rise or others fall. Apart from that, leave it alone.

Like a good airline flight, good investing should NOT be exciting. Good investing, in fact, really should be boring. If you can implement the above suggestions, they should go a long way toward freeing you from the psychological traps of the stress and worry that come with the responsibility of investing. And down the road, chances are you'll be pleased with the outcome.