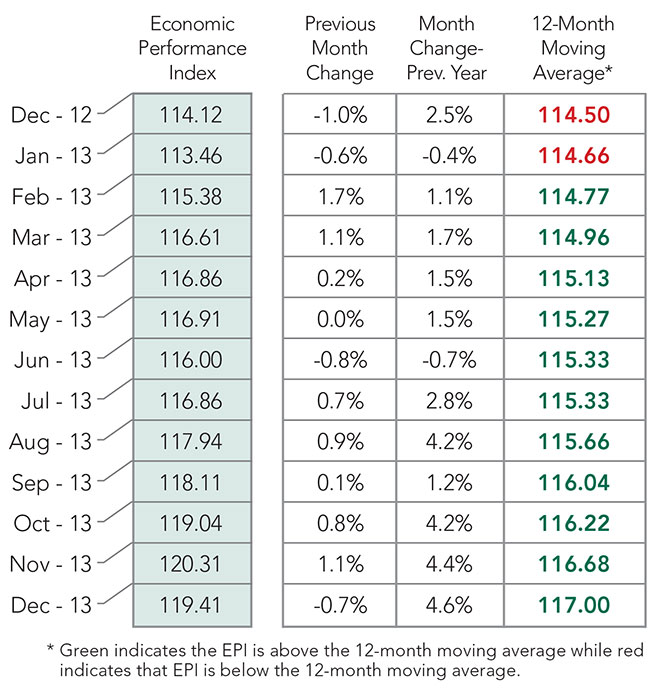 Lafayette's December 2013 Economic Performance Index is 119, up five points compared to December 2012. The index at the end of the fourth quarter showed a one-point increase from the end of the third quarter; and the Index has not dropped below the 12-month moving average during the past 11 months. Since experiencing a dip in fourth quarter 2012, the EPI has shown only upward movement in the past year. Currently, the EPI is two points higher than the 12-month moving average, signaling a very strong year. The Index's position relative to the 12-month moving average - in our case it has been above for 11 of the past 13 months - gives an indication of how the overall economy is fairing.

Lafayette's economy has been steadily growing since 2010. The Index has increased 15 percent since hitting a decade low in August 2009.

Opportunities created by this economic prosperity have not gone unnoticed. In December, Bell Helicopter announced it will produce the new Bell 505 Jet Ranger X at Lafayette Regional Airport, making it the first modern-era aircraft assembly facility in Louisiana. The project will create 115 new direct jobs averaging more than $55,000 per year, plus benefits. For the second year, Lafayette was ranked 24th out of the 200 largest metro areas in the Best Performing Cities Index compiled by the Milken Institute. Lafayette's low cost of doing business and our proximity to energy operations in the Gulf of Mexico were listed as assets to our continued success.

Looking at all 15 indicators as a whole shows that we ended 2013 stronger than 2012. When all three categories of indicators - leading, current, and lagging - move in the same upward direction it means that the local economy is on track for continued growth and prosperity. 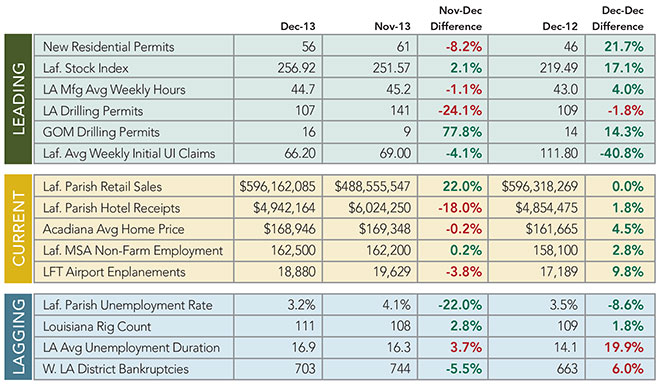 Like any index, the EPI combines multiple data points into a single score that can be tracked and compared over time. It monitors 15,000 data points and 15 local statistics that together illustrate a unified story about how the Lafayette economy is performing. The index is the most accurate reflection of the economy, because it is seasonally and inflation adjusted, meaning movement in the index is based on actual changes, not those caused by changes in periodic variation or time. The EPI is also retroactively adjusted to allow for a more accurate comparison between present and past performance of the economy. This allows for an "apples to apples" comparison of where we are and where we have been.

Leading indicators are those that change three to six months prior to the overall economy showing signs of adjustment. In December all but one of the leading indicators saw improvements over last year. This marks another encouraging quarter for the local economy.

The Lafayette Stock Index has continued its upward trend with a score of 256.9 in December. This is 17.1 percent higher than December 2012. After hitting a 10-year low in February 2009, the index has grown 108 percent to achieve an all-time high in December of last year. The fourth quarter index is the first full quarter to include Frank's International, which went public in August 2013.

Current indicators - those that change at the same time that the overall economy shows signs of adjustment - continue to show strength in the fourth quarter as all indicators are outperforming 2012.

Retail Sales remains one of the top economic indicators because it illustrates the level of consumer spending and confidence in a community.

December saw more than $596 million in sales; and through the year, Lafayette retailers had more than $6.01 billion in sales. This is a 5.3 percent increase over 2012, and the highest-ever annual retail sales in Lafayette Parish. In fact, Lafayette reached the $6 billion milestone merely seven years after hitting the $5 billion mark in 2006. Seasonally adjusted sales for each month have only dipped under the 12-month moving average four times out of the last 47 months, reinforcing the upward trend in retail sales and a healthy amount of consumer confidence. Lafayette Parish Hotel/Motel Receipts also outperformed 2012 numbers. December receipts totaled $4.9 million and slightly outperformed 2012 by 1.8 percent. Year-end Hotel/Motel Receipts are 4.5 percent higher than the previous year. In October, Hotel/Motel Receipts had the second-highest month ever at $8.2 million. The performance of Retail Sales and Hotel/Motel Receipts continues to demonstrate the strength of the Lafayette hospitality market.

Non-Farm Employment in the Lafayette MSA is among the strongest indicators with 162,500 jobs. Nearly 18,500 jobs have been added since the end of the recession in 2010. Employment in Lafayette has increased 12.8 percent; while the national economy has added jobs at a slower rate of 6.8 percent since the recession ended. December had the highest employment level ever seen in the Lafayette MSA. As long as the indicators keep improving, look for local businesses to continue adding jobs. 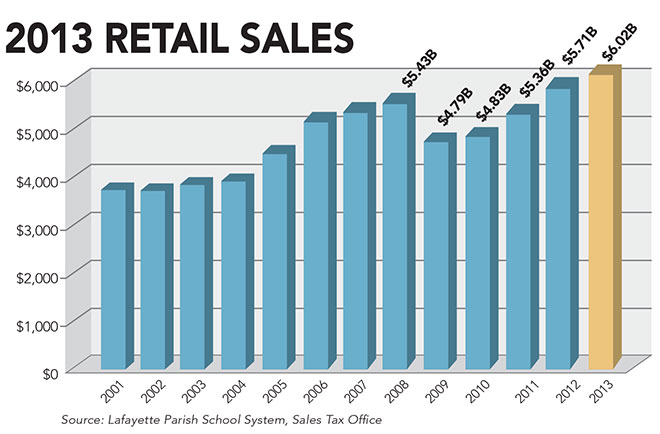 Other current indicators such as Lafayette Regional Airport Enplanements and Average Home Sale Prices continue to show positive momentum. After second quarter enplanements marked the highest quarter ever, fourth quarter enplanements showed an expected holiday dip. Year-end enplanements totaled 236,264 - the highest ever and 2.3 percent higher than 2012. That is great news for the airport. The Average Home Sale Price of single family homes in Lafayette is also performing well, reflecting strong performances by other indicators. Year-end average sales price of a home was $179,984, 8.5 percent higher than the 2012 average price, $165,886. Despite some month-to-month volatility, the average sales price has been slowly growing since the beginning of 2012. The 12-month moving average has been climbing since late 2012, reinforcing the upward trend.

The fourth quarter saw the lagging indicators - those changing three to six months after the overall economy adjusts - continuing to align themselves with the healthy leading and current indicators.

There were 111 rigs on and offshore in Louisiana last December, which is up from the 109 rigs in December 2012. Louisiana Rig Counts is the only lagging indicator that has not shown considerable improvement in the past few years. This year marked the lowest average count since we started collecting the data in 1997. The underwhelming number of rigs, impacted by the decrease in onshore rigs in the Haynesville Shale area, is the result of falling natural gas prices and the lack of desirable wet gas in the play. On a positive note, natural gas prices have risen this year and closed out in December at $4.24/MMBtu. The higher natural gas prices could positively affect rig counts further down the line, but in the meantime this indicator continues to look murky. The industry would be boosted considerably if the price of natural gas would surpass what the Wall Street Journal calls the "psychologically key mark" of $4/MMBtu and stay there.