Born in New York and reared in Boston, Chef John Panaro combined his degrees in biology, chemistry, nutrition and culinary arts to launch Anne's Table, a gourmet health food restaurant. Named in honor of his mother, Anne, who died of breast cancer, Anne's Table offers gluten-free, vegan and nutritionally balanced items to support a healthy lifestyle. "I hope to inspire others to eat nutritionally to prevent cancer and other diseases," Panaro says.

After obtaining bachelor's degrees in chemistry and biology from Curry College in Milton, Mass., Panaro landed a job with a private company as an environmental chemist investigating hazardous waste conditions for the Environmental Protection Agency. 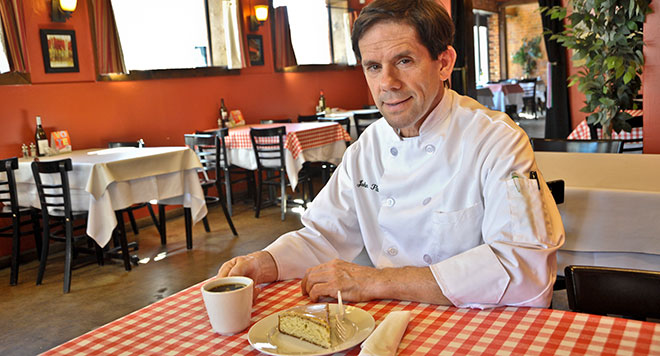 After a few years in the environmental business, Panaro started getting restless. Always a health and fitness buff, he decided to change gears and get a master's degree in nutrition and communications at Boston University. He then switched back to his original training and accepted an environmental equipment sales job in sunny San Francisco.

Living the California lifestyle sparked Panaro to change directions once again and pursue work in his other degree, communications. He accepted a job in public relations, marketing and communications for a high-tech company in Silicon Valley. Then, the ideal job popped up as the marketing director for a food manufacturer in Northern California.

His father's cancer diagnosis drew him back to New York. After his father's death, he used his inheritance to go to the Culinary Institute of American in New York. With his previous degrees, he was able to take an accelerated year-and-a-half program. After obtaining his associate's degree in occupational studies, he was ready to work as a chef. "I got my associate's degree last," he says with a laugh.

Ready to work as a full-fledged foot scientist, Panaro accepted a six-month internship with International Flavors and Fragrances in New Jersey, where he learned how to add flavors to food products. "It was one of the most enjoyable jobs I ever had," he recalls.

A year later, he found a job as a food scientist/formulator at the Wright Group in Crowley. "I added vitamins, minerals and botanicals to food products," he says.

After that job, he decided to open his own restaurant. "I had always wanted to do something related to food, nutrition and health, but the culinary arts basically sealed it. That seemed to be my calling. I wanted to use my knowledge of how to make things taste good and apply it to a healthy food restaurant. "

Launched on Aug. 27, Anne's Table is located at 740 Jefferson St. in the space formerly occupied by Pane & Vino and Bonnie Bell's. The dine-in/take out restaurant features healthy foods that are low calorie, low fat, and gluten-free with a few vegan options. Nutritional analysis is provided for all items. "I want to feed people healthy food so they can reap the benefits that go along with that - feeling better, losing weight, and lowering cholesterol and hypertension," he says. "I follow the government guidelines for healthy eating for Americans that is reviewed every five years by a panel of experts in nutrition from all over the country."

Anne's Table is one of the few places in town that features primarily gluten-free dishes, with the exception of whole-wheat sandwiches. "I especially designed the menu to be gluten-free, primarily for two reasons - one is for them to show people that it doesn't take a lot to eaten gluten-free. I serve wild rice, brown rice and quinoa, and lots of fruits, vegetables and meat in a lot of my dishes, which are naturally free from gluten. I also wanted to offer an option for people who are allergic to gluten or have celiac disease."

Popular items at Anne's Table include the shrimp paella, chicken jambalaya (using brown instead of white rice) and the Hoppin' John Salad with cornbread and fresh vegetables. New items include Drunken Fig Salad (dried figs soaked in wine and honey served over mixed greens with satsumas, ground walnuts and Monchego cheese drizzled with a wine honey vinaigrette), Rambo Red Beans and Rice (red beans served with brown rice) and fresh flounder. Panaro keeps an herb and vegetable garden on his back patio, which he uses in his dishes. He also shops at local farmer's markets for fresh produce.

The casual restaurant offers order-in table service as well as take-out. For convenience, items are served in to-go containers. Customers are encouraged to bring their own wine (with no corkage fee) to enjoy with meals.