The former governor's entrance into the 6th Congressional District race dredges up negative national attention for the state. 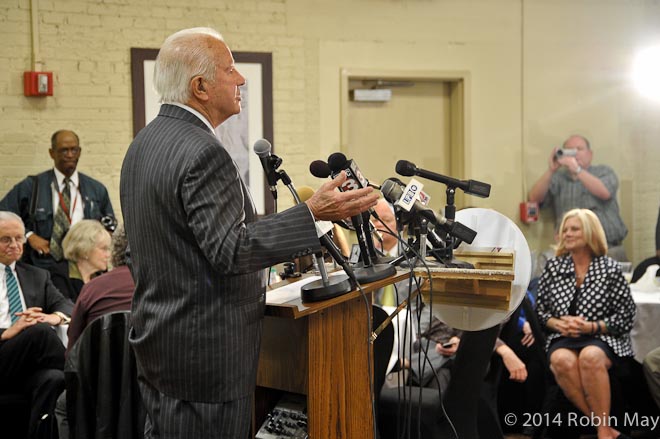 Edwards may want to talk about issues, but stories about his candidacy don't come without talk of his federal corruption conviction and inevitable references to Louisiana's reputation for shady, backroom political dealing.

The mere fact that a convicted felon is considered a viable candidate in the state renews conversations about the stereotype of Louisiana as a state teeming with corruption.

It's a reputation that many of the state's own residents have celebrated and joked about. Edwards himself used to quip that he was the subject of two dozen investigations by his own count. Bumper stickers supporting Edwards in the 1991 governor's race against former Ku Klux Klan leader David Duke read, "Vote for the crook. It's important."

But it's also a stereotype that has raised red flags when Louisiana sought federal hurricane relief aid and Gulf oil spill recovery money. And it's a reputation that statewide elected officials, including the three governors since Edwards left office, have tried to extinguish.

Edwards, 86, also seems to want to move past the conviction talk, instead outlining his positions on health care and energy issues as he announced his congressional campaign at the Press Club of Baton Rouge last week.

But the conviction is wrapped up in Edwards' biography, and it's too salacious for national reporters, columnists, pundits and bloggers to ignore.

"Edwin Edwards just isn't through hurting us," said Elliott Stonecipher, a demographer and pollster from Shreveport, in a column he circulated by email.

Longtime Democratic political operative Bob Mann, now a mass communications professor at LSU, asked on his political blog, "Governor, have you no shame?"

"He cannot run for office and truthfully tell us he really cares about Louisiana," Mann wrote.

The four-term former governor, a Democrat, served eight years in prison for a bribery and extortion scheme to rig riverboat casino licenses after his final term in office.

Now, Edwards is running for a seat being vacated by Republican Bill Cassidy, who is running for the Senate against incumbent Democrat U.S. Sen. Mary Landrieu.

Nearly a dozen candidates have said they will run for the position representing the 6th District, which stretches from Pointe Coupee Parish into Terrebonne and Lafourche parishes and contains most of the metropolitan Baton Rouge area. The seat is considered a GOP stronghold.

As he announced his campaign last week, Edwards had to explain that his candidacy is allowed under federal law even though the Louisiana Constitution prohibits him from running for state office.

He maintains that his corruption conviction was undeserved and based on false testimony from former friends and that the federal judge unfairly favored the prosecutors. He also acknowledged part of his campaign will involve explaining the case.

"Forgiveness, understanding, second chances are important in life and in politics," Edwards said.

Others believe the long-time politician simply misses the spotlight after decades of prominence.

Edwards regained the public eye soon after leaving prison in 2011, when he married a woman 50 years younger than him, starred with her in a short-lived reality TV series and fathered a child with her.

Whatever the reasons for his campaign, people inside and outside of Louisiana are captivated by the story.

Louisiana's current governor, Bobby Jindal, took office in 2008 talking about the need to rid the state of the stain of corruption and improve its national reputation.

Of course, Jindal also said he wouldn't discount the possibility the convicted felon could win.

"I wouldn't bet against Edwin," the current governor said.