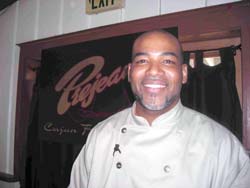 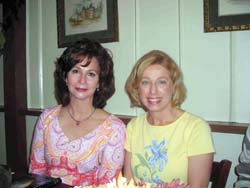 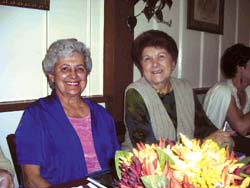 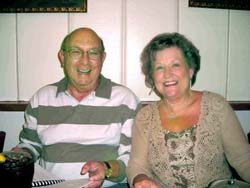 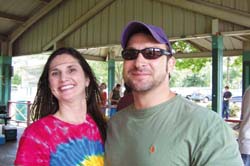 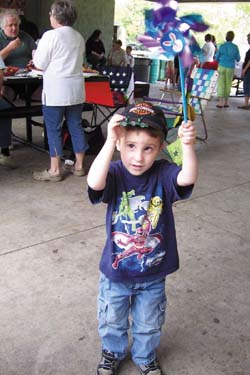 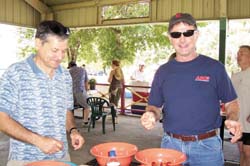 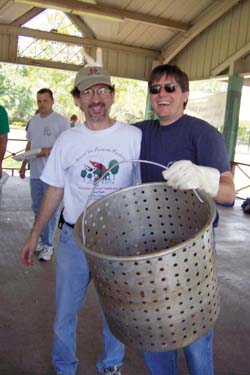 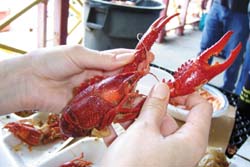 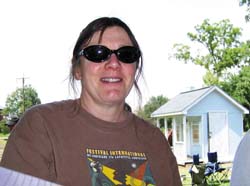 Not certain about the type of wine that goes with a certain Cajun dish? Wondering about which mushrooms to use in an andouille and mushroom cream sauce? Last week I went to the right place to find answers to such questions. I was personally invited to attend the filming of the third taping of the TV show Simply Cajun, hosted by Prejean's Executive Chef Terryl Jackson. Using the Prejean's Restaurant cookbook as a guide, he prepared a fabulous entree right before my very eyes. Watch the show on Cox Channel 9 to get the lowdown on "Eyes of Lyric," a rib eye sauced with the andouille and mushroom cream, named for Mr. Ernest and Mrs. Prejean's daughter, Lyric. Chef Terryl's also gearing up for the New Orleans Jazz & Heritage Festival, where he'll team up with Cajun Kettle Food to jazz up those Louisiana dishes for festivalgoers. Yum!

Speaking of celebrations, what happens when biologists, who devote most of their time to research, debate the best way to boil crawfish? Dave Castellanos first pondered that question more than a decade ago, and started an annual crawfish cookoff in 1998 to settle disputes among his friends and colleagues. On Saturday, April 14, Girard Park pavilion was transformed into a laboratory with 900 pounds of crawfish to satiate any biologist's appetite for wetlands research. Among the hundreds of guests, the boil-off had nine competing teams consisting of grad students, professors and biologists from the National Wetlands Research Center, Louisiana Department of Natural Resources, Natural Resource Conservation Services and the National Oceanic and Atmospheric Administration. After doing my own extensive research, I concluded these scientists/crawfish boilers were crawfish experts; I had some of the best tasting crawfish I've had this year. The New Orleans Cox team took first place at Dave and Ellen's 10th annual crawfish boil; second place went to Turtleman Steve and third place was Team LSU. After eating countless pounds of crawfish, I worked some of it off by dancing to the music of Charlo and Southern Tradition. Who knew scientists were so much fun?