More ?s than answers
The questionable circumstances surrounding the recent death of Victor White III - the New Iberia man who allegedly shot himself while handcuffed in the backseat of an Iberia Parish Sheriff's Office cruiser - is catching national attention, this time from Vice, which gives an account of the story from the victim's father's perspective.

After learning of his son's death, Victor Sr., who lives in Alexandria, wanted answers. "They wouldn't even let me see the body," he tells Vice. Eventually, however, the sheriff's office agreed to give Victor Sr. a partial look at his son, allowing him to look only at his face.

As the case with its treatment of the media, the sheriff's office has also given Victor Sr. the same old run-around as it keeps tight-lipped on Victor III's death. That silence has only gone toward creating a myriad of unanswered questions: Like, how did the arresting deputy overlook a handgun during frisking? Does the sheriff's office have surveillance video of the incident? Who was the arresting officer? And why did Victor III's face, post-mortem, bare signs of having been beaten, while witnesses present at the time of the arrest say that wasn't the case prior to his being taken by the sheriff's office?

"He was a respectable person. He went to church. It's so unusual for them to say he was uncooperative.' And for them to say he shot himself, that's just unbelievable," Victor Sr. tells Vice. "I saw his face. I know they beat him before he arrived at the station, because those who were with him before he was arrested said he didn't have a mark on him."

The family has since hired attorney Carol Powell Lexing, known for her work in the Jena Six case. 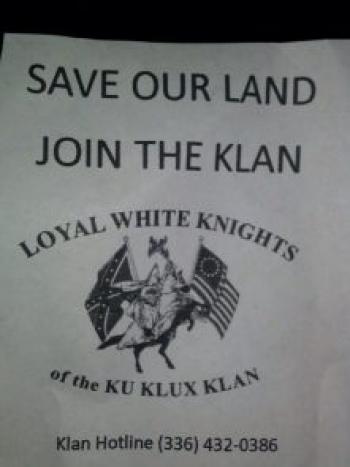 Forever hiding: The Ku Klux Kowards
Instead of donning their white hoods, this time they hid behind the First Amendment, as Eunice Today reports here that the individuals who were in Eunice over the weekend distributing flyers for the Loyal White Knights of the Ku Klux Klan apparently committed no crime.

The flyers were left in yards and under the windshield wiper blades of a number of vehicles belonging to both white and black residents late Saturday night, and though Eunice Police did pull over the responsible party - including a Lake Charles man and woman, a Conroe, Texas man and a Eunice man - no arrests were made. Since they didn't directly violate any criminal statutes, persay, their names are not being released.

The flyers made no direct threats of violence, and appeared more like a dying organization's attempt at recruitment, yet the underlying message was clear, and sadly, the moral of this story ultimately shows that for some small-minded folks, racial hatred is still alive and well.