Another white collar criminal gets a slap on the wrist
Penny Crappell, a former St. Mary Parish School Board employee serving a five-year probation for stealing more than $60,000 from an elementary school's activity fund, has been let off the hook. According to this report by Franklin's Banner-Tribune, Crappell had only served 13 months of her probation.

At her guilty plea on Nov. 5, 2012, Crappell, a former member of Berwick's Board of Aldermen, claimed she had a gambling addiction, which made her steal from the school. That addiction, according to court records, is the reason she received such a lenient sentence, serving no jail time, because "treatment is a better remedy than incarceration."

Despite only serving a fraction of her probation, not to mention the fact she didn't pay the more than $77,000 in court ordered restitution, Crappell on Wednesday received a first-offenders pardon, meaning her criminal past will be scrubbed from the record.

If Crappell would have been caught in possession of pot for instance, she'd likely still be in jail, yet based on the court's actions, she committed a far less severe crime by merely stealing close to a $100,000 intended for school children.

Car chase ends up in flames
Abbeville, according to this report by Vermilion Today, was treated to some excitement Wednesday night when a car chase ended up with a vehicle running smack-dab into a court house pillar and erupting into flames. 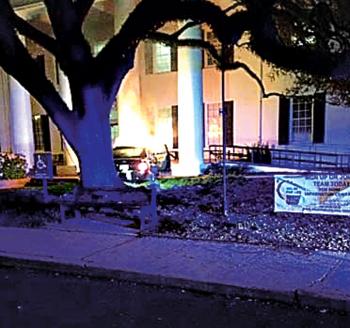 The chase resulted from a tip phoned into police that the car, a black Ford 500, contained narcotics and firearms, as well as a wanted juvenile.

The chase lasted all of 10 minutes and resulted in a broken leg for the driver, Twaski Lewis, who will likely face arrest upon his release from Abbeville General.