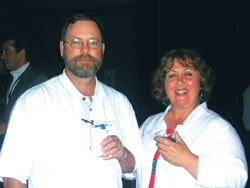 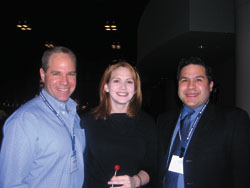 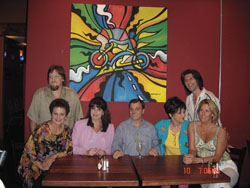 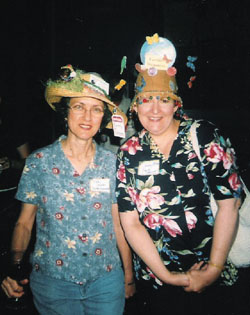 Whew! Party Girl's been out on the town so much she can hardly keep up. And with this beautiful spring weather, who wouldn't want to make the rounds! Here's my PG wrapup of spring events, so try to keep up. For all the techies out there, the Tech South event last month packed in as much information as possible in just two days. A highlight of the event was the "Networking Without Wires" cocktail party, complete with international-style music by Taylor Guarisco, in celebration of Festival International. There were also Cajun delicacies like crawfish pie and muffalettas.

On the fundraising side, Party Girl's calendar has been full! Connie's Angel Network took flight recently, with events throughout April and May to raise money for brain cancer. The network commissioned a piece of art by Robert Baxter for its Flight For Life Poker Run, held May 8. Board members and sponsors of the event celebrated the cool motorcycle-themed piece at Guamas Restaurant during a recent ArtWalk. (Stay tuned to PG for a party report of the network's first annual "Night Flight" wine tasting event.)

In support of Healing House, formerly The Grief Center, City Club at River Ranch was the place to be for some toe-tappin' Cajun music. The fundraiser featured Richard LeBouef and Two Step, who entertained the crowd during breakfast. After the performance, Richard unveiled his new cooking/music show, Good Time Kitchen, airing on Saturday mornings on TV 10. And over at 307 Downtown, Big Brothers Big Sisters Hats Off Volunteer Appreciation Party also combined entertainment with some tasty appetizers. Desert Dance belly dancers took the stage, while BBBS staff and volunteers snacked on food from Zeus, Southside Bakery, Tsunami, Roly Poly and more. "This year's Hats Off to Volunteers party was a great success," says BBBS Development Coordinator Amy E. Vollman. Party Girl's never seen so many volunteers in one place before!