More than a year after his longtime assistant admitted to her role in a bribery scheme that went on within earshot of his office for four years, D.A. Mike Harson says he's sorry.

More than two years after a federal investigation involving a bribery scheme conducted by his office led to three guilty pleas from his employees, 15th Judicial District Attorney Mike Harson has finally apologized.

In a letter dated March 31, Harson says that he accepts the criticism he received "for the actions of these employees." He says his trust was misplaced and that he failed to prevent "their unfortunate acts."

Barna Haynes, his longtime administrative assistant (she worked for him for 30 years), was one of the main coordinators of the bribery scheme, which used Harson's own "Immediate 894" program to help those charged with misdemeanor and felony crimes secure favorable outcomes in court. Those cases involved a variety of crimes, most of which were misdemeanor OWIs, but U.S. Attorney Stephanie Finley says Haynes also accepted bribes in drug cases.

Haynes, assistant D.A. Greg Williams and his secretary are all awaiting sentencing, while the alleged mastermind behind the scheme, Robert Williamson, is set to go to trial Oct. 20 (the trial was twice delayed). He is charged with six counts of bribery "for operating a pay-for-plea scheme that garnered favorable treatment for defendants charged with state violations of operating while intoxicated," one count of conspiracy, one count of Social Security fraud and one count of making false statements to federal agents. He pleaded not guilty.

Haynes' office was within earshot of Harson's, so where was he when all of this conspiring was going on over a four-year period? His letter does nothing to address his incompetence. While the feds say Harson had no knowledge of the corruption, they do say the illegal activity was allowed to go on for so long because of a lack of oversight and safeguards in his office.

Until this March 31 letter, Harson has only defended himself, saying he had no knowledge, and thereby no responsibility, for the actions of these employees.

Keith Stutes, Harson's top prosecutor who retired after 28 years and is challenging his former boss for the job this fall, questions why the apology is coming so late - and for the first time Stutes reveals his own efforts to get Harson to come clean with the staff on the controversial program that was exploited for personal gain. Stutes released this statement to The IND:

I demanded an explanation in 2012 from the District Attorney for the never heard of "immediate 894" process, on behalf of all of us. This program, personally created by him, was the object of a federal investigation, which resulted in the convictions of three employees. The investigation and its results brought shame and embarrassment to the office. We did not receive an explanation, nor a response, much less an apology. He claims that he has been "cleared" by the investigations, but has yet to explain how a criminal conspiracy, centered on a special program he created and in which his approval was required in every single case, could have gone on without his knowledge and consent.

Read more on the campaign here.

For his part, Harson appears to be getting pretty good advice from his political consultants, though, like Stutes, we wonder what took so long.

You be the judge: 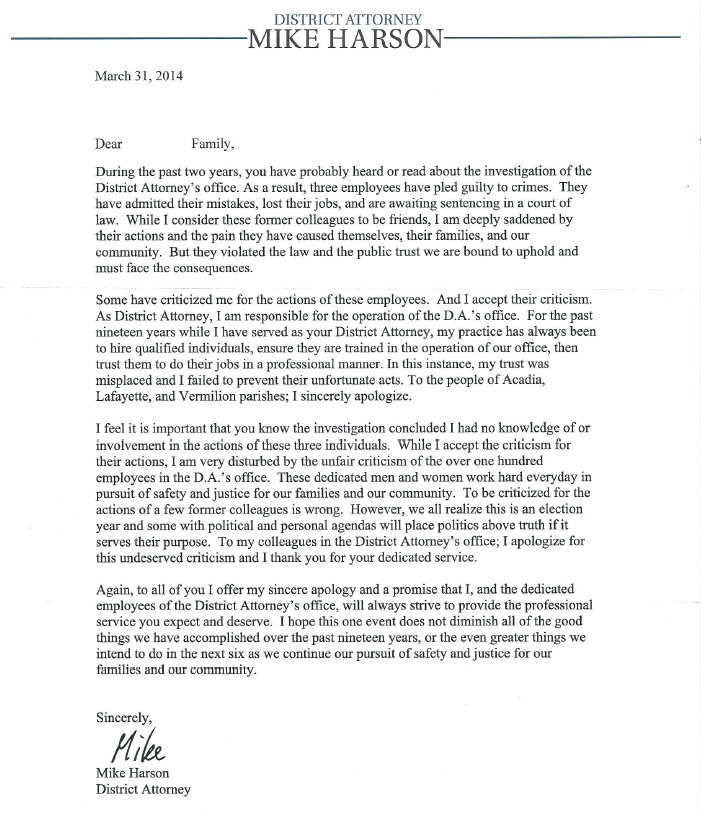