U.S. Rep. Vance McAllister has evidently been outed as something less than the family-values Christian he portrayed himself as when he campaigned last year.

[UPDATE: Republican U.S. Rep. Vance McAllister issued a statement Monday afternoon after The Ouachita Citizen of West Monroe broke a story that the freshman congressman was captured in what appears to be video surveillance of him passionately kissing and embracing a member of his congressional staff. Here is the statement: "There's no doubt I've fallen short and I'm asking for forgiveness. I'm asking for forgiveness from God, my wife, my kids, my staff, and my constituents who elected me to serve. Trust is something I know has to be earned whether your (sic) a husband, a father, or a congressman. I promise to do everything I can to earn back the trust of everyone I've disappointed. From day one, I've always tried to be an honest man. I ran for congress to make a difference and not to just be another politician. I don't want to make a political statement on this, I would just simply like to say that I'm very sorry for what I've done. While I realize I serve the public, I would appreciate the privacy given to my children as we get through this."]

U.S. Rep. Vance McAllister, who won a special election last fall to finish the unexpired term of Rodney Alexander and who came out of nowhere to beat a presumed shoo-in, has evidently been outed as something less than the family-values Christian he portrayed himself as when he campaigned last year.

The West Monroe-based newspaper The Ouachita Citizen has posted surveillance video alleged to have been shot in McAllister's Monroe district office late last year showing the freshman Republican congressman making out with a person the newspaper identifies as part-time district aide Melissa Anne Hixon Peacock, who, according to the paper, was hired by McAllister the day after he was sworn in last November. McAllister is married and has five children.

The paper further reports that McAllister, who benefitted greatly in his campaign through support from the Robertson family of Duck Dynasty fame, has had a professional (and possibly) friendly relationship with Peacock's husband, and that both Peacocks separately donated $5,200 to McAllister's bid for Congress.

McCallister shocked the Louisiana political world by first getting into a runoff with and then soundly defeating state Sen. Neil Riser, whom many believed was Gov. Bobby Jindal's hand-picked successor to Alexander. 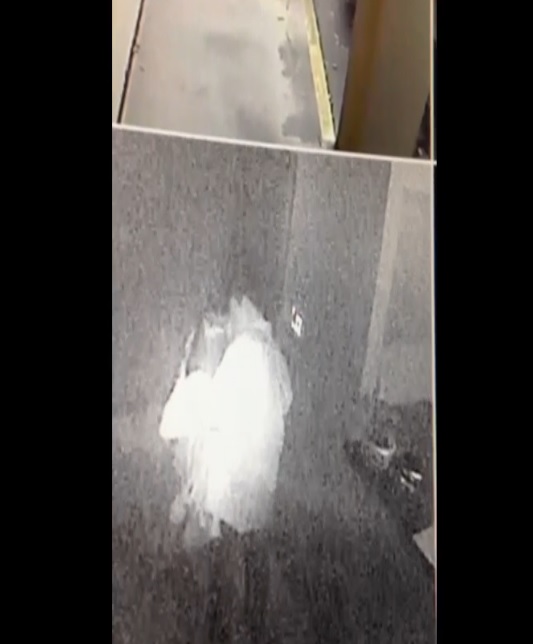 Washington, D.C., politics website Politico has since picked up the McAllister affair story. Both Politico and The Ouachita Citizen reached out to the McAllister camp and have yet to receive comment. If McAllister, a self-made millionaire who campaigned last year as a devout Christian and family man, wants to remain in Congress he will have to run for re-election in November.

It's unclear what, if any, impact this latest development will have on an upcoming fundraiser for McAllister hosted by an Acadian Ambulance PAC. In an April 4 email, Acadian Chairman and CEO Richard Zuschlag writes:

I hope you will join me in supporting my friend and newest congressman in our Louisiana delegation.

Congressman Vance McAllister was elected to fill Rodney Alexander's seat in Louisiana's 5th Congressional District. He is a veteran, family man, and self-made businessman who brings a conservative, honest, and fresh perspective to Washington.

We are hosting a luncheon fundraiser at our corporate offices located at 130 E. Kaliste Saloom, 3rd floor board room, on Friday, April 25th. 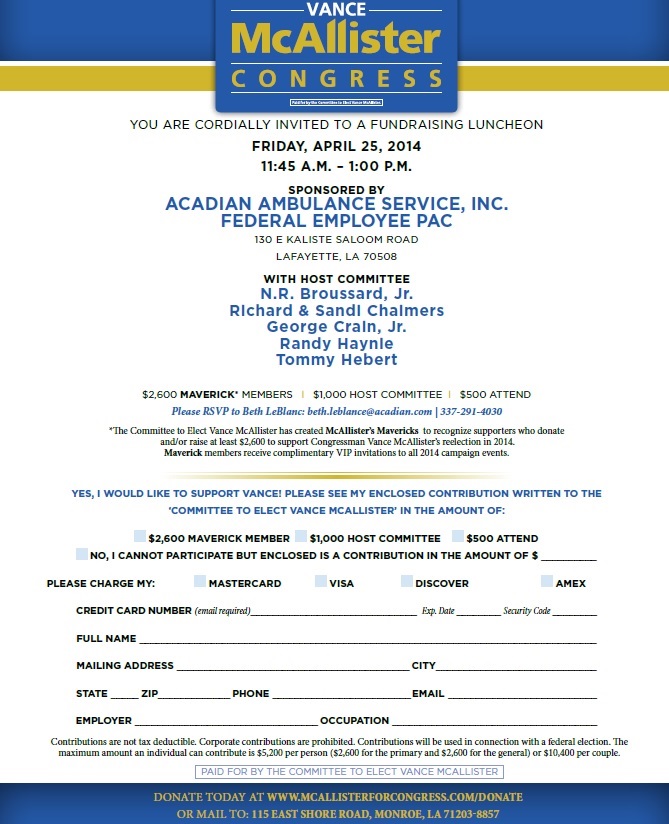