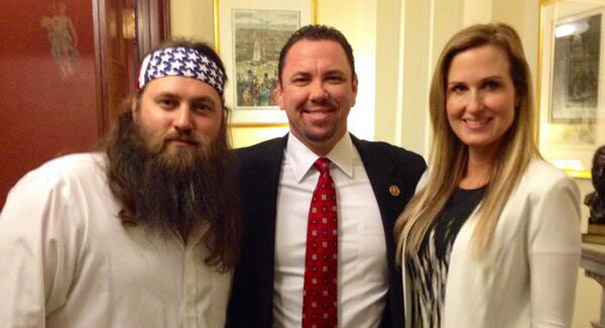 So far, the media's coverage of Congressman Vance McAllister's philandering has overlooked the real issue, argues blogger Lamar White Jr., who has a different take on the scandal that broke nationwide Monday.

White doesn't spare the Republican congressman, calling him a "hypocrite" in the vein of Sen. David Vitter following the release late Monday of this apology:

From day one, I've always tried to be an honest man. I ran for congress to make a difference and not to just be another politician. I don't want to make a political statement on this, I would just simply like to say that I'm very sorry for what I've done. While I realize I serve the public, I would appreciate the privacy given to my children as we get through this.

McAllister's actions, however, aren't the real scandal here, argues White. He points to the timely release of the surveillance video, nearly four months after it was recorded.

The Ouachita Citizen, which broke the story Monday, was a vocal opponent of McAllister during the recent election to fulfill the seat vacated by Rodney Alexander.

White says neither McAllister nor Melissa Peacock broke the law by committing adultery. The person using a cell phone camera inside McAllister's federal office, however, did commit a crime.

According to White, McAllister's office - which also was the home office of Rodney Alexander - is owned by architect Bill Land, who holds an office across the street and was a financial supporter of state Sen. Neil Riser, the congressman's competition in last year's election.

While White doesn't name Land as the culprit behind the leaked surveillance footage, he does think this was an inside job from within the Louisiana Republican Party:

I know more than I am currently willing to report, but suffice it to say, the Louisiana Republican Party and its leadership have never been happy with Congressman Vance McAllister's outspoken support of Medicaid expansion.

I've been told that party leaders were aware of Congressman McAllister's plan to continue emphasizing the need for Medicaid expansion, not just in front of Washington audiences but also in meetings throughout Louisiana. And that, more than anything, may explain why these videos were released when they were.

It's like the reverse, redneck Watergate: A political party that spies on itself.