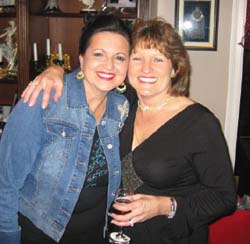 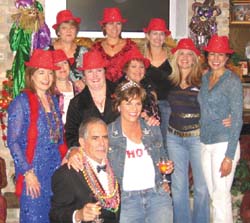 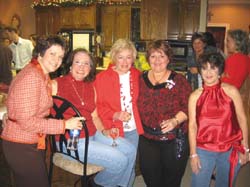 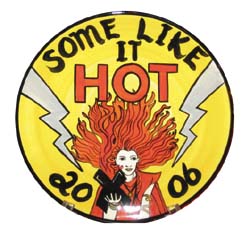 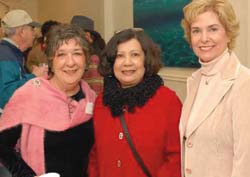 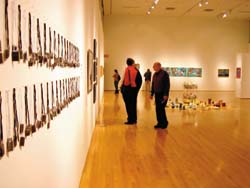 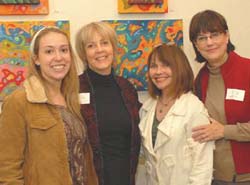 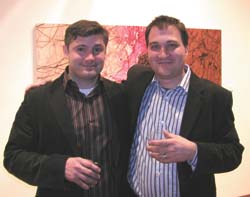 Mardi Gras parties are heating up for Lafayette's revelers! But none have been hotter than those held by the Krewe of Xanadu, whose 2006 theme is "Some Like it Hot." The krewe's Twelfth Night party kicked off the season with a slight heat wave at the home of Richard and Dianne Carlisle. The couple throws the kickoff each year, and guests were asked to wear jeans and a "hot" top. Red and pink were the colors of choice, and the court came decked in red top hats. Strawberry margaritas helped guests cool down, but a Mexican trio had Denise and Carson Brignac, Kim and Ron Domingue, Donna and Steve Lyon and Lee and Marty Audiffred breaking a sweat once again. Xanadu historian Erin Spisak explains that the party's purpose is for the muses to welcome the season and for the board and committee chairs to let their hair down for a night. But this is only the beginning, and Xanadu members must sizzle through their upcoming Zeus Muse party and Queen's Luncheon.

The hot ticket for the second weekend of January was ArtWalk, with exhibits running the gamut from scapulars and work boots to Francis Pavy-esque zydeco figures and skin blemishes. The weekend began with the Acadiana Center for the Arts' preview party of Sustained Winds, its newest exhibit of works by regional artists inspired by last year's hurricane season. Featured artists were invited to peruse the works and enjoy live Cajun music, before the public opening the next night. The Art Center's Sarah James says almost 800 people turned out for the big opening, a definite ArtWalk feat. The Ind's own Terri Fensel has two photographs in the exhibit, but Delaina LeBlanc's 80 Percent scapulars and Elizabeth Wright's work boots are also must-sees. The crowds continued down the street, checking out Galerie Eclaireuse's exhibit of paintings by Colleen McDaniel ' and spread of crawfish étouffée cooked up by her husband John Chappuis. Across the street at Jefferson Street Market, Jean Rosen's paintings struck a chord with most Acadiana natives, some resembling Francis Pavy's style, filled with dancers, music and local figures.

But the exhibit ArtWalk patrons are still talking about is New York artist Kevin Klein's "realistic" pieces hanging at Grand Contemporary. And by realistic, I mean feet, scabs, lips and plenty of bruises and varicose veins. Pretty gross, but also pretty interesting! There was no shortage of wide eyes or expanded minds at that exhibit, and Party Girl commends Jennifer Grand and George Marks for being brave enough to show it to us. The Grand was also celebrating its one-year anniversary that night, so I hope Kevin's works are only a preview of what's to come in 2006. If you missed meeting Kevin ' perfectly normal and adorable in a corduroy jacket and jeans ' he's already headed back to the Big Apple, but the exhibit will be up through the end of February.