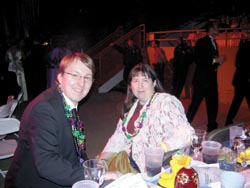 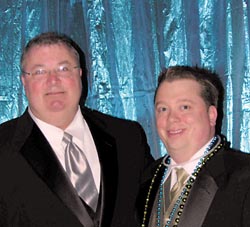 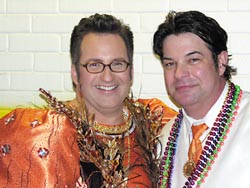 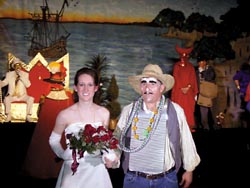 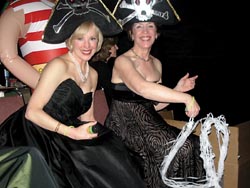 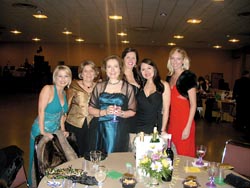 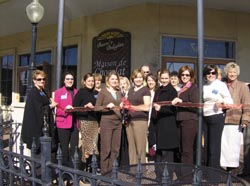 In Party Girl's informed opinion, the Krewe of Apollo tableau was a bit tamer and the program a bit tighter than recent years, which isn't a bad thing at all. The theme was "Weather or Not," and the boys did themselves quite proud. Krewe captain Ted Viator's rooster costume in the opening vignette "Weathervane" was fabulous ' from now on whenever Party Girl hears "cock of the walk" referenced, this is surely the image that will come to mind. From the Wizard of Oz Tornado to the Dairy Queen Blizzard, Apollo had the crowd under the weather and under its spell. Party Girl's rating: five stars!

It's tradition in Lafayette that the ladies line up for the annual Les Brigands de Lafitte Mardi Gras ball, never to be disappointed. But this year the ladies in waiting arrived to find café tables and chairs, a complimentary bar and hors d'oeuvres, thanks to the krewe's anointed grand dame, Merilyn Crain. It was a nice surprise ' a thoughtful touch' and our dainty toes were ever-so-thankful. The theme of this year's ball was Meauxtown Madness and Jean Lafitte the 53rd was certainly in the groove. As is also Brigands tradition, the maids are escorted to join the tableau by masked members of the court and the queen is announced at the end of the program, a surprise to all, including emcee Ernie Alexander, who doesn't know until he opens the envelope. This year's queen was Christine Elizabeth Comeaux, and her court included Martha Byrd, Amanda Champagne, Jennifer Mereby, Hailey Deas, Sara Youngue, Renee Walker, Anne Holleman and Wilhemina Ross. Among the lucky ladies seen during the call-out dances were Dana Armentor, Susan Strait, Margaret Trahan, Ann Laurent and Judy Wade.

Among all of the celebrations during the beginning of the year and one close to my heart, Party Girl loves Valentine's Day ' and all the chocolate associated with it! Party Girl is especially happy these days; Dawn's Maison de Chocolat is open to serve all of my sweet cravings. Recently a ribbon cutting was held with the Greater Lafayette Chamber of Commerce. All in attendance were treated to a delicious chocolate sampling of Dawn's famous Belgian chocolate ' just enough to keep one desiring more!