An unholy trinity of civil-society upheavalers whose first names are not Conner, Tanner or Logan are facing charges in Eunice. 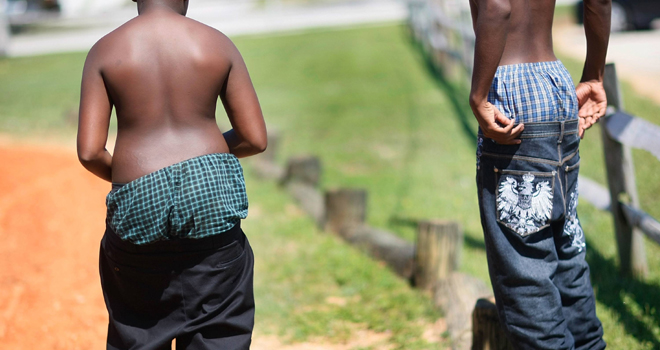 An unholy trinity of civil-society upheavalers whose first names are not Conner, Tanner or Logan are facing charges in Eunice, the hamlet in St. Landry Parish popularly known as "Belt City U.S.A."

According to an account at KLFY citing Eunice Po-Po, officers received a complaint about the scofflaws perambulating about Vine Street in flagrant violation of the city's dress code - specifically Eunice's prohibition on sagging pants. Police approached the ne'er-do-wells and, according to KLFY's telling, smelled the inviting aroma of cannabis, at which point officers advised the danger-urchins that they would be searched. One fled and was later apprehended. All were booked into jail charged with wearing pants below their waist in public.

Police note that the suspects share three common features: dark skin, exotic, non-Caucasian first names - Gujuan, Shaiheem and Devacques - and pants so saggy as to reveal the contours of their boxer-shorts-covered buttocks.

Following the cuffing and stuffing of the Pendulous Pants Posse, the Eunice Ladies' Modesty League was able to resume its meeting - this despite the sergeant-at-arms feeling a bit blushy and light-headed.