The Louisiana Senate sided with Gov. Bobby Jindal and the oil industry Tuesday, agreeing to void a lawsuit that a south Louisiana flood board filed against more than 90 oil and gas companies for coastal damage.

BATON ROUGE, La. (AP) - The Louisiana Senate sided with Gov. Bobby Jindal and the oil industry Tuesday, agreeing to void a lawsuit that a south Louisiana flood board filed against more than 90 oil and gas companies for coastal damage. 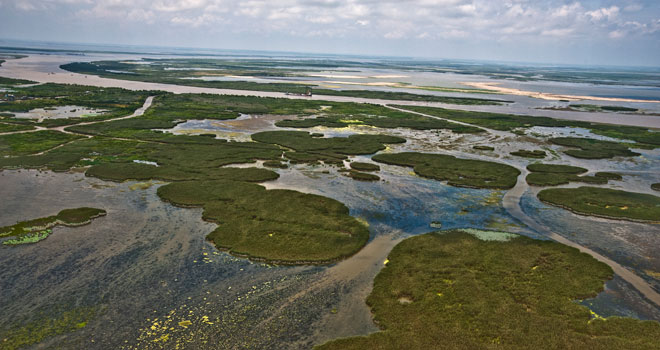 This aerial photograph shows canals oil and gas companies cut through Louisiana's wetlands. The SLFPA-E's suit claims the companies ravaged the state's coastal landscape, which is the first line of defense for South Louisiana's communities against the destructive forces of hurricanes.

The issue is among the most contentious of the legislative session, dividing lawmakers from coastal parishes over the best way to seek restoration money and whether the oil and gas industry should be held responsible for the destruction of Louisiana's vulnerable wetlands.

Adley's bill would prohibit Louisiana's flood protection authorities from hiring outside lawyers without approval from the governor and apply the restrictions retroactively to strike at the lawsuit that Jindal opposes. It also would require lawmakers to approve board contingency-fee arrangements of the type used in the levee board lawsuit in any future lawsuits.

Adley said the measure would subject the levee boards to the same standards required of other state boards and commissions that need approval for outside contracts. He said he believes that already was required in the levee board's lawsuit.

"It was done illegally. A corrupt process does not breed good things," Adley said.

Critics say the bill would introduce political meddling into a process designed to be free of such interference. They said it seeks to give special immunity to one favored industry.

Sen. J.P. Morrell, D-New Orleans, said Louisiana has a $50 billion coastal restoration plan and nowhere near the money to pay for it. He said oil and gas exploration caused part of the state's erosion problems.

"The message we send here today is if an industry doesn't like what you're doing, you can hire enough people and get enough votes to undo (it)," Morrell said.

Sen. Norby Chabert, R-Houma, represents a coastal area and told senators of a hurricane that left him in "floodwaters up to my waist in my house that my daddy built and died in." But he said he supported Adley's bill, saying the levee board handled the lawsuit improperly. He said the board's responsibility was for hurricane protection, not coastal restoration.

Some opponents objected specifically to the retroactivity in Adley's bill, saying the Legislature shouldn't be trying to undo a lawsuit once it's filed.

Sen. Bob Kostelka, R-Monroe, a former judge, tried to strip the retroactivity, but that failed in a 20-17 vote against the amendment.

"We have no right to tell the courts how to handle a case," Kostelka said. "Let the courts do what their job is. Let the chips fall where they may."

Adley said the lawsuit sought to retroactively penalize the oil and gas companies for damage that is claimed from 70 or 80 years ago. He said the state Supreme Court repeatedly has upheld other bills that lawmakers have made retroactive.

If the board wants to sue, it simply would have to follow the terms of the bill to preserve its plans, he said.

"It's going to have to follow a process of complete sunshine when you enter into one of these contracts. That's all it says. Tell me what's wrong with that," Adley said.

The bill goes next to the House for debate.