The scion of a landmark Four Corners restaurant climbs back into Lafayette's culinary scene as franchisee for a popular burger chain.

The scion of a landmark Four Corners restaurant climbs back into Lafayette's culinary scene as franchisee for a popular burger chain. By Lisa Hanchey 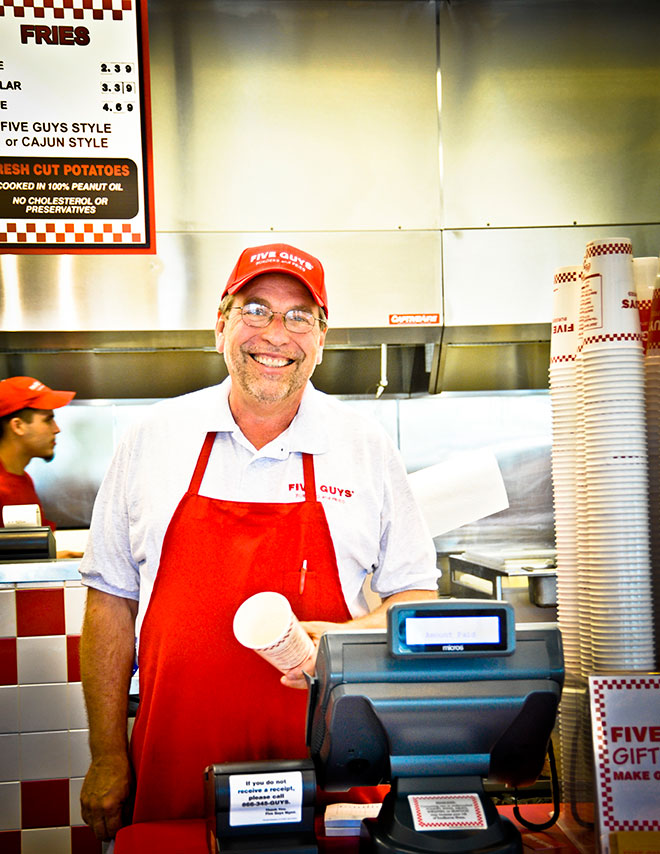 When Jerry and Janie Murrell launched the original Five Guys Burgers and Fries in 1986, they intended it to be a legacy to their five sons. Today, Lafayette native Billy Jacobs hopes to do the same for his kids - though he makes it clear that's not the primary reason for his new venture.

Before opening his own Five Guys, Jacob had worked as executive chef for Popeyes' corporate entity. After being in Atlanta for 17 years, he started researching food franchises in the southwest area. "I was looking for a way to get back home," he says.

After looking at several brands, including Jimmy John's and Baja Fresh, he was sold on Five Guys. Opened in a small shotgun building in Arlington, Va., the restaurant's concept was simple - burgers, hotdogs, fries and drinks. Over its 20 years in business, the chain became so popular that it was franchised throughout the U.S. (and London). "Nothing has changed with Five Guys since 1986," Jacob says. "They've never added anything to the menu; they've never taken anything off. They've never put in a drive-thru."

Five Guys has 1,000 locations nationwide and more than 1,500 units in development. Jacob owns a handful of those restaurants - two in Baton Rouge (Towne Center and  LSU campus), Covington (Highway 21), Metairie, Harahan and coming soon to Slidell and Denham Springs. At one time, the Harahan store was the busiest store in the world - that is, until Lafayette.

Four years ago, Jacobs started scouting for the perfect spot to open a store in his hometown. He found the location at the highly trafficked corner of Ambassador Caffery Parkway and Settlers Trace. After several setbacks, he finally broke ground on the property facing Ambassador next to Starbucks.

On Nov. 22, Five Guys finally opened to long lines of carnivores salivating to try Lafayette's newest burger joint. In just three months, the restaurant was so popular that it became the busiest Five Guys in the world at one point, surpassing Harahan's record. What's the secret? "The patties are refrigerated, not frozen, and are made by hand every day," Jacobs says. "The bread is baked fresh at Langlinais every day. Burgers are custom made: Tell me what you want on it, not what you don't want on it.'"

When I arrived at Five Guys for my scheduled interview, Jacob was hustling behind the counter supervising employers and slinging out burgers. He then made the rounds, stopping by tables to chat with customers. "I'm here every day," he says." Which is a lot, considering Five Guys is open seven days a week, closing only for Thanksgiving, Christmas and Easter.

Jacob learned his work ethic from his restaurateur parents, Olite and Lawrence, owners of  the renowned Jacob's Restaurant at Four Corners. For almost 50 years, it was Lafayette's go-to place, attracting locals and tourists alike. When the oil bust hit, the restaurant closed in 1985. Billy, who grew up working in the restaurant and got a degree from the Culinary Institute in New York, opened his own place in the Oil Center, later selling it to á la carte.

Under his agreement with Five Guys, Jacob has until 2020 to open a total of 15 stores in Louisiana. Based on his numbers so far, he is right on track. Just in Lafayette, he typically sells 1,000 burgers per weekday and 1,500 to 1,800 a day on weekends.

But, Jacobs stresses that his ultimate goal is not to set any records. "All three of my sons are working here - one is a construction manager, one is a general manager, and my youngest son is with me here," he says. "I'm not doing it for them; I'm doing it for myself. Like somebody told me, If you are doing it for your kids, you are going to be disappointed.'"