The annual juried competition recognizes excellence in architecture, interior design and historic preservation in Lafayette and the five surrounding parishes.

Each winner is recognized among his and her peers at the annual INDesign Awards Luncheon and Lecture that kicks off INNOV8 on April 24 at the Hilton Lafayette. This year a lifetime achievement award will be presented to the family of trailblazing Lafayette architect Dave Perkins, who died earlier this year. The INDesign INNOV8tion Award will be presented to Lafayette Consolidated Government for the Lafayette Comprehensive Plan.

The INDesign Awards recognize outstanding projects in commercial and residential architecture and interior design, historic preservation and urban development. In addition to the luncheon event, winning residential projects are profiled in The IND (see the April issue) and commercial projects are featured in ABiz. This year the judges did not award the top prize, INDesign Gold, to any entries in the commercial category. See full list of winners on Page 25.

Keynote speaker for this year's event is the French architect/historian Stephane Kirkland, author of Paris Reborn, a highly acclaimed and engrossing account of the transformation of Paris from a dirty, congested and dangerous city into one of Europe's most beloved landmarks during the tenure of Napoleon III. Presenting sponsor for the luncheon is IberiaBank.

This year IND Media is pleased to welcome to the judges roster Lafayette native Emilie Taylor. Taylor works at the Tulane School of Architecture as a lecturer and is senior program coordinator at the Tulane City Center. Taylor's education includes a technical building background at the University of Southern Mississippi followed by a master's degree in Architecture at Tulane, and work with BILD design in New Orleans. Through the Tulane City Center, she works on projects and community partnerships that provide opportunities for faculty and students to engage in real issues in the community through design. She is actively involved in university design/build and advocates for the engagement of such programs with the local community. Before the storm and the rebuilding efforts that followed, Taylor conducted a traveling fellowship across the South to meet, document and study divinely inspired, self-taught builders. With the work of filmmaker Zack Godshall, also a Lafayette native, that research was expanded into God's Architects, a feature-length documentary released in 2009.

Beth Miller has judged the INDesign Awards since their inception a decade ago. A licensed interior designer, Miller began teaching at Mississippi State University two decades ago, became the director in 2000 and accepted the position of interim associate dean in August 2013. She has served as a site visitor for the Council for Interior Design Accreditation for more than 10 years, serving as a team chair and as a task committee member reviewing standards for accreditation. Her involvement with CIDA led to her being asked by Indiana State University to serve as a consultant to assist its program in achieving accreditation. She has received numerous college and national awards for teaching, had her design work published in magazines and has won awards for her work regionally. She was recently appointed by the Mississippi governor to serve on the first Interior Design Advisory Council, which is under the Mississippi State Board of Architecture, and was selected to be an Educator Medalist by the American Society of Interior Designers. Miller still maintains her private practice, working in health care and residential areas with a focus on kitchen and bath design. She has also worked on numerous historic properties in the Southeast. 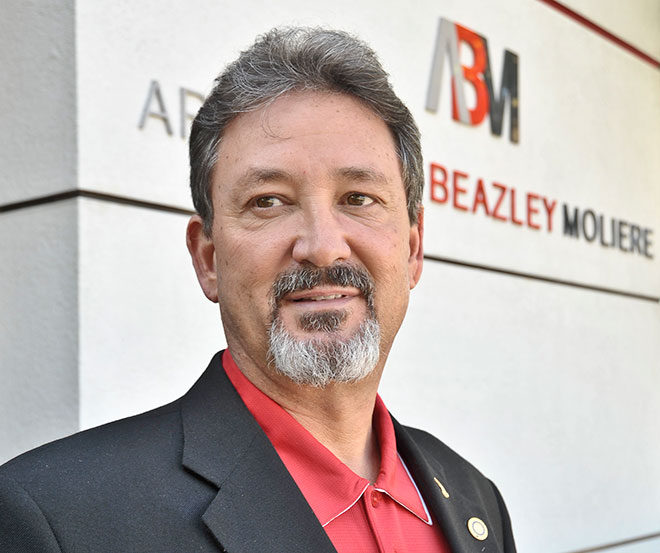 A well-designed business building is about more than looks. It's about creating a space that makes business better. Charles Beazley knows this.

When it came time to create a new space for Professional Arts Pharmacy, a clear understanding of function married a modern aesthetic for a final product of more than 11,000 square feet that speaks to the cutting-edge mission of the business.

What resulted from the collaboration is a basic modern design that not only looks forward-thinking, but actually saves the business in time spent on tasks thanks to the layout that makes business processes more streamlined.

The design for the local compounding pharmacy, owned by pharmacists Eric Vidrine and David Mayer, began with a competition within the offices of Architects Beazley Moliere; potential designs were then shown to the business owner.

"[The client] decided some aspects of several that he liked and we put them together to create this. We don't do that very often, but we decided we would do something fun," Beazley says.

The building accentuates what's happening inside - the business is a three-pronged one - and is divided into three parts.

"There is the laboratory space, the dispensing area and the clerical and administrative area," he says. "Each one has a slightly different aesthetic to it within the same sort of design language with the center part being the focal point, which is where the product goes in and out. As with most modern design, it had a lot to do with function and the design relating to the function."

Beazley says the client wanted something modern and upbeat.

"It's not a typical pharmacy," he says. "It's upscale, and they were looking for something that says something forward-reaching about them and what they do."