"This is one of the oldest divides that exists, and that divide is about the haves and the have-nots."

[From the Editors: We cannot state emphatically enough that we support Councilman Kenneth Boudreaux's call for the Acadiana legislative delegation to support Senate Bill 96 by Democratic Sen. Ben Nevers of Bogalusa and allow Louisiana voters to decide whether our state should expand Medicaid under the Affordable Care Act, AKA Obamacare. The terms of the deal are superb with regard to return on investment: the feds would pay 100 percent of the cost of expanding Medicaid to newly eligible adults through 2016 and gradually drop that cost burden to 90 percent by 2020. Gov. Bobby Jindal, blinded by his ambition and loath to betray "the base" by doing anything that could be construed as countenancing Obamacare (despite editorial after editorial from the state's top newspapers, including this one published Tuesday, imploring him to take the money), claims the expansion would be too costly for Louisiana. But that is simply not the case. Some recent estimates peg the state's burden at about $1 billion over the first decade of expansion (although an analysis released earlier this month by the Legislative Fiscal Office concludes that in those first 10 years Louisiana would actually save $500 million). Put another way, in a state with an annual budget of roughly $25 billion, the cost to Louisiana would be 1/25th the annual budget spread out over 10 years, allowing some 240,000 uninsured residents to stop treating the emergency room as their primary care facility and passing the cost along to the rest of us in the form of higher premiums and higher health care costs. And the economic benefits - not to mention the moral urgency of expanding Medicaid - are estimated to far outweigh any cost to Louisiana taxpayers: 15,000 new jobs in health care and related fields and the creation of $2 billion in economic activity. Further, Nevers' bill was amended to simply put the matter before voters who, polls suggest, favor expanding Medicaid. This is a no-brainer. Let the voters decide.] 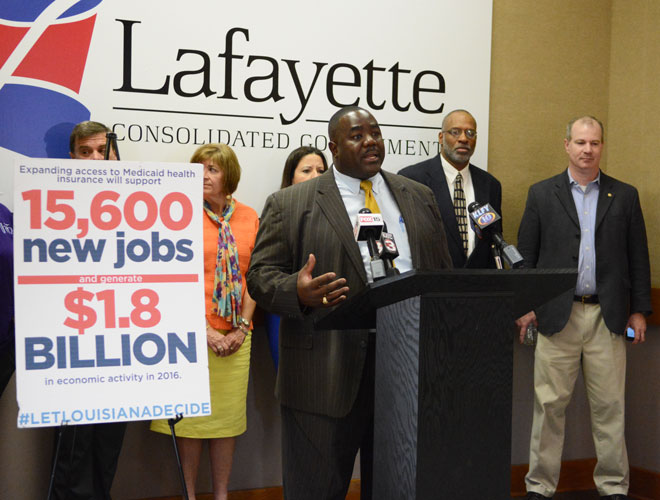 Councilman Kenneth Boudreaux, flanked by members of the non- and for-profit health care sector and faith-based community, urges Acadiana's legislative delegation to support a bill that would allow voters to decide whether to expand Medicaid in Louisiana.

Riffing on a phrase popularized by U.S. Sen. Mary Landrieu in her repeated calls for Gov. Bobby Jindal to accept Medicaid expansion under the Affordable Care Act - a move he has thus far steadfastly resisted since it doesn't jibe with his political ambitions - City-Parish Councilman Kenneth Boudreaux and a group representing the non- and for-profit health sector as well as the faith-based community urged Lafayette's legislative delegation to "close the Jindal gap" and support Senate Bill 96.

The legislation by Sen. Ben Nevers, D-Bogalusa, would clear the way for a constitutional amendment asking Louisiana voters to decide whether to accept billions of dollars in federal money to expand Medicaid, making it accessible to some 240,000 Louisiana residents who currently earn too much to qualify for Medicaid but not enough to afford private insurance (they don't qualify for ACA's tax credits) - that Jindal gap, so-called due to the governor's recalcitrance.

"This is one of the oldest divides that exists, and that divide is about the haves and the have-nots. - those who have access to affordable insurance and those who do not have access at all," Boudreaux said. "Today we encourage the Louisiana Legislature to vote in favor of allowing the people of Louisiana to decide whether or not to expand Medicaid. This is an opportunity to get a return on our federal investment." 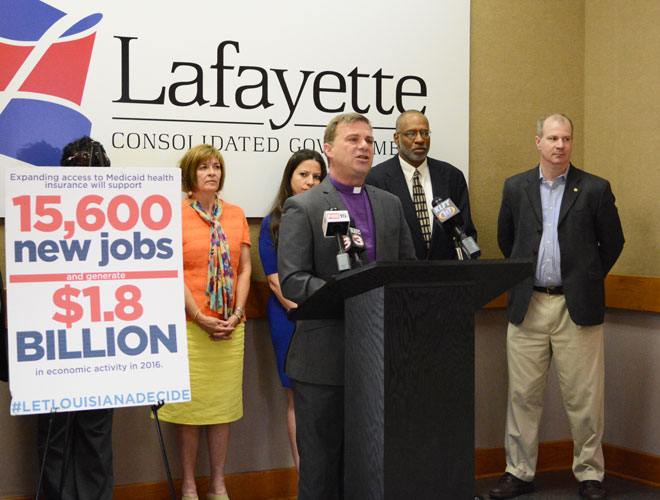 The Rev. Jimmy Broussard says there is a moral imperative
to expanding Medicaid.

One Louisiana resident, home health worker Vicki Cormier, said she is trapped in the Jindal gap, earning above current Medicaid income requirements but not enough to afford private insurance. As a result, Cormier said, she was recently hit with an unaffordable $1,400 doctor bill after seeking treatment for a cold. Medicaid expansion, she added, is as much about peace of mind as obtaining health insurance. "If I had [insurance] I could get up in the morning knowing that if something happens to me in the afternoon I can go to the doctor."

But it was the moral imperative of expanding Medicaid as explained by Rev. Jimmy Broussard, pastor of Crowley's First Presbyterian Church, that may resonate most deeply with many on the fence about the issue: "In the book of Micah we are told that God asks of us three things: to act justly, to love mercy and to walk humbly with our God," Broussard said, adding later of state lawmakers, "We are imploring and pleading with those who do have a decision to act justly to pray, to meditate, because they are the elders who represent those who are less fortunate. We ask them to take a concerned look and to do what is just and right, not only for them but in the eyes of God."

The Senate Health and Welfare Committee will consider SB 96 Wednesday.