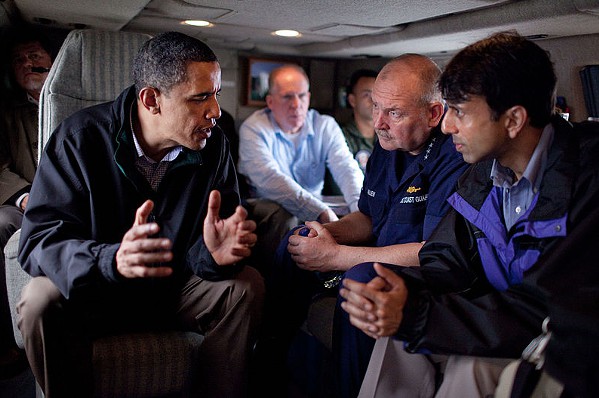 President Barack Obama talking with Gov. Bobby Jindal aboard Air Force One following the 2010 BP oil disaster. A new poll shows Louisianans approve and disapprove of the president s and the governor's performances in office in equal measure.

A new poll of four Southern states by The New York Times/Kaiser Family Foundation found identical percentages of Louisianans approve and disapprove of Gov. Bobby Jindal and President Barack Obama's performances in office. Of the respondents, 40 percent approved and 54 percent disapproved of the way Obama and Jindal are each handling his job.

The differences were slightly more pronounced when it came to the performances of U.S. Sens. Mary Landrieu and David Vitter. Landrieu, a Democrat, received a 49/45 percent approval/disapproval rating, while Vitter's percentages were 51/35. Only 6 percent of respondents didn't know or had no answer when it came to Landrieu; Vitter's don't know/no answer percentage was more than double that at 13 percent.

Landrieu, who's running against a field of Republicans in the November 2014 general election, is out in front with 42 percent of respondents saying she'd have their vote if the election was today. She leads challengers U.S. Rep. Bill Cassidy (18 percent), state Rep. Paul Hollis (5 percent) and Rob Maness (4 percent). Thirty percent of respondents weren't sure if they would vote, or for whom.