Greg Guidroz could not believe what he was hearing when he showed up Wednesday, as he's done for the past 14 years, to help out with the recycling effort at Festival International. 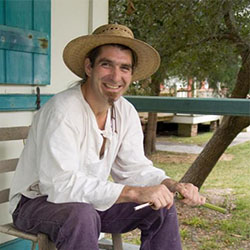 "What do you mean there's no recycling at Festival?" Guidroz wrote in an impassioned letter to The IND Thursday morning, going on to explain that he was told the local Recycling Foundation, which had donated its services for 20 years, was purchased by another company that refused to provide the service free of charge this year.

The IND inquired about Guidroz's concerns with Festival officials, and late Thursday spokeswoman Apiyo Obala issued a written statement to The IND saying that Progressive Waste Solutions, which bought the Recycling Foundation, was late in notifying the Festival that it was withdrawing its donation. "Unfortunately, by the time we discovered this, it was too late to find another solution or raise the additional funds require to purchase their recycling services," the statement reads.

At the same time The IND also reached out Lafayette Consolidated Government CAO Dee Stanley, who was unaware there was no recycling going on this year and promised to look into the matter.

He did a lot more than that. Stanley got the ball rolling to explore other options and by noon today said a resolution was likely.

At about 2:30 p.m. he confirmed that recycling was returning today.

Yipee! (Now please show your appreciation and recycle away, and properly, people.) 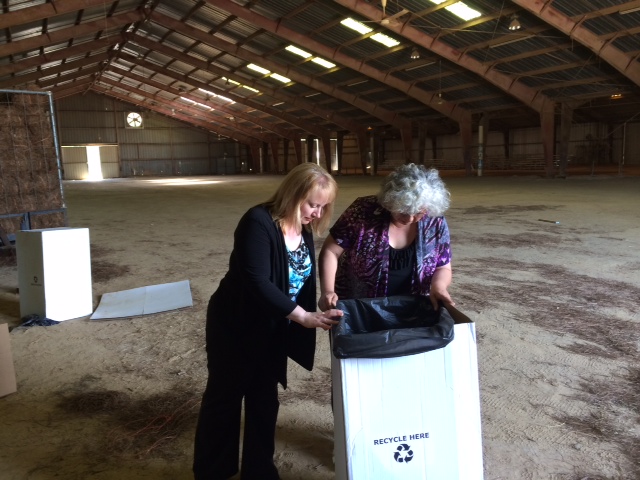 Veronica Ryder, left, and Jenny Meadows, members of CAO Dee Stanley's staff, got behind the effort to find recycling receptacles for this year's Festival International. In this photograph, they test the sturdiness of recycling bins belonging to UL that were in storage in the barn behind Blackham Coliseum.

It seems Stanley got a lot of help from his own staff and friends, including Sheriff Mike Neustrom, Director of Corrections Rob Reardon, and UL Lafayette's Office of Facility Management - all of whom worked to pull the initiative together. Mike Hess, UL's grounds manager, provided dozens of recycling bins from the university's events inventory, Stanley says, and Neustrom's inmate manufacturing facility, known as Lapcorr, mobilized its inmate labor force to glue 100 boxes together for delivery late this afternoon to the festival grounds. Inmate labor will also be used to empty the receptacles and load recyclable cans onto trucks for proper disposal.

Stanley, however, specifically singled out Guidroz for prompting so many people to act: "It is always a great moment when one of our citizens comes forward with a passion and dedication to do what is right. Thanks to Greg, we did not let this effort die. As soon as we heard of Festival's needs, we all put in the extra effort to make this happen. Our friends at UL and the Sheriff's office stepped in with absolutely no notice to get this done. As a result, more than 150 recycling containers will be delivered this afternoon to the festival grounds. We encourage all festival participants to use them properly."

Fest officials say recycling should not be an issue next year, as the city and Festival organizers are already working on a permanent solution.

What do you mean there's no recycling at Festival? For the past 14 years now I have invested my personal energy into volunteering for Festival International. For 14 years now I have been a part of the recycling crew which has labored out of pure love, diligently working to raise awareness about the importance of acting responsibly while festivaling. For 14 years I have actively participated in the generous efforts of the festival recycling crew to see that all the resourceful energy left in the refuse and waste generated by this colossal event that has become known as Festival International de Louisiane is brought to its greatest potential by returning the products that can be recycled into the products that will make the next year's festival.

I have watched my volunteer efforts grow into my annual volunteer obligations; and I have watched the awareness of festival goers grow from filling recycle bins with anything and everything, to dealing with not much of anything other than recyclable products in recycle bins. Can it honestly be that I am I alone in accepting these obligations as my civic duty to our children's future?  Does anyone else even think this way anymore? Or is there still enough integrity left in our culture to do what's right not because it is economical, but because it is the RIGHT thing to do!

Yes, times change and it is obvious that they have. However, our cultural values which have been tried and trued, remain tried and trued; and coming from a culture where the intestines of pigs have been transformed into one of the most world renowned culinary delicacies South Louisiana can imagine, I do not understand how difficult it is to comprehend that there is still very valuable potential lying latent in recyclable products, especially in the volumes that are generated by Festival International de Louisiane in the minute span of one extended weekend.  Not to mention that for this very important weekend the eyes of the word are upon Lafayette, Louisiana. Is the message that recycling is too much of a hassle to bother with the message we want broadcasted to the World?

I understand our local Recycling Foundation has recently been bought out by a larger out-of-town recycling corporation, and I have seen first-hand how Lafayette citizens are now paying more $$$ for less services being rendered. Perhaps it is time for the City to review its contract and seek services from another provider? Or, possibly it is time that we realize that FESTIVAL IS NOT FREE! It is a BEAUTIFUL GIFT! And if we are to continue to live in a community of givers perhaps it is time that we TAKE A STAND and mandate recycling at all local festivals to insure that our cultural values and "le joie de vivre" will be secured and sustained into the future of our children, their children, and their children's children.