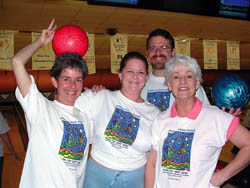 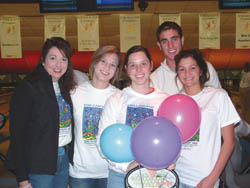 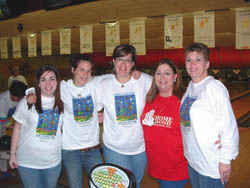 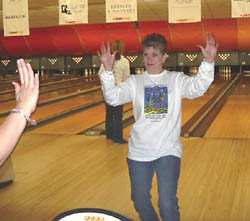 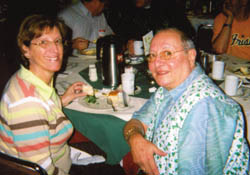 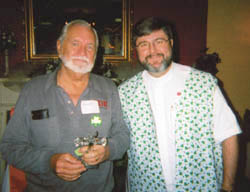 Well, y'all, it's official. Party Girl can now jet off to Dallas for the weekend any time she wants with American Eagle's new service at Lafayette Regional Airport. The announcement came April 3, and LFR did not take it lightly. They threw a party, of course, welcoming the first American Eagle travelers with plenty of balloons and a water cannon salute as the flight touched down. It's a big step for the airport and also means Lafayette is more connected by air to the rest of the world, something Party Girl plans to use to her full advantage. Robbie Bush with Associated Wayfarer Travel said at the press conference that the new service gives us more routes into the Caribbean. Sign me up, Robbie!

Signing on for Big Brothers Big Sisters Bowl for Kids Sake at Acadiana Lanes last month were Home Mortgage and Van Eaton & Romero. Home Mortgage's Arlene Bodoin got serious about bowling and was not happy after missing a spare. She made up for it with a strike later! Meanwhile, Van Eaton & Romero's nine teams were the largest morning participant and included stellar bowlers Richard Tanory and Helen Bellamy. At the end of the day, the winner was Big Brothers Big Sisters, raising over a third of its annual budget at the event.

While Party Girl missed Bennigan's annual Blarney Blast for St. Patrick's Day this year, I didn't forget the holiday and neither did Saint Patrick's Church on Pinhook. The Rev. Paul Bienvenu hosted his annual St. Patrick's Day breakfast at à la carte, complete with shamrock attire, traditional Irish dancing and crawfish étouffee. Andre Arceneaux was presented with the Spirit of St. Patrick Award, and guests showed up with door prizes ' either invented or baked. Pauline Lalonde's chocolate toffee was the favorite! Closing out the festivities, Sheila Ryan from the Ryan School of Irish Dance entertained more than 150 guests, including Ann Knight, Kakki and Jim Purslow and Msgr. Bob Angelle.