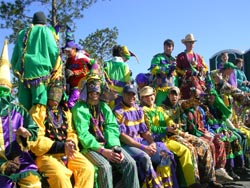 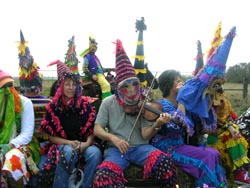 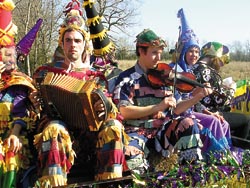 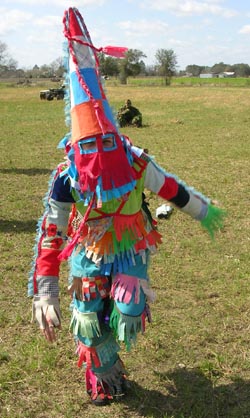 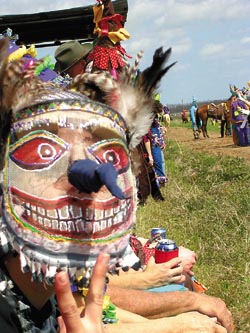 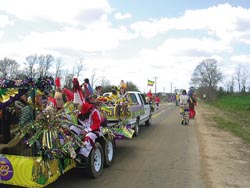 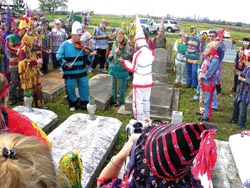 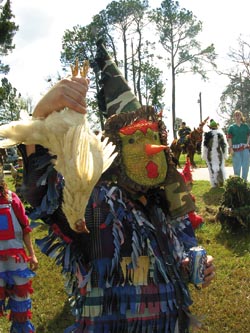 It's official: Lafayette 2006 Mardi Gras was a success! Beautiful, sunny weather arrived just in time for Lundi Gras and only got better on Fat Tuesday. Party Girl even got a slight sunburn! While many locals headed to New Orleans, Party Girl stayed in her hometown so she wouldn't miss a thing ' or any beads. I also ventured out into the countryside for runs in Church Point and near Eunice. Held on Sunday, Church Point celebrated its 45th annual courir. The "boys" of Church Point were in rare form, wooing many a woman with their hootin' and hollerin'.

Just east of Eunice, on Mardi Gras day, disguised in my pink Mardi Gras outfit, I witnessed the first-annual Faquetigue Courir de Mardi Gras. The brainchild of former Red Stick Rambler Joel Savoy, this run took riders back to the roots of Mardi Gras. Joel's brother, Wilson, says Eunice's run had gotten too rowdy for him, so the Faquetigue group decided to create their own, with the goal of remaining authentic and small. No beads or radios were allowed (all music was played on instruments), and all of the participants had to be in costume and dance, sing, beg and chase chickens at each stop. "We had about 200 attendees this year, which we pray will not grow," Wilson says.

The graveyard was one of the last stops of the group, where they paused to pay homage to legendary fiddler Dennis McGee. Several musicians also played fiddle tunes in Dennis' name, and that afternoon at a yard dance, Wilson's Pine Leaf Boys and Corey Ledet helped kick up some dust. "Everyone praised Joel for resurrecting a lost tradition, and there was not a single soul who could not have been happier with the outcome of the day," says Wilson. "Truly a perfect way to spend Mardi Gras."