Denny and Katie Culbert find personal reward in a movement that unites Acadiana's culinary scene like never before.

Denny and Katie Culbert find personal reward in a movement that unites Acadiana's culinary scene like never before. By Heather Miller ~ Photos by Robin May 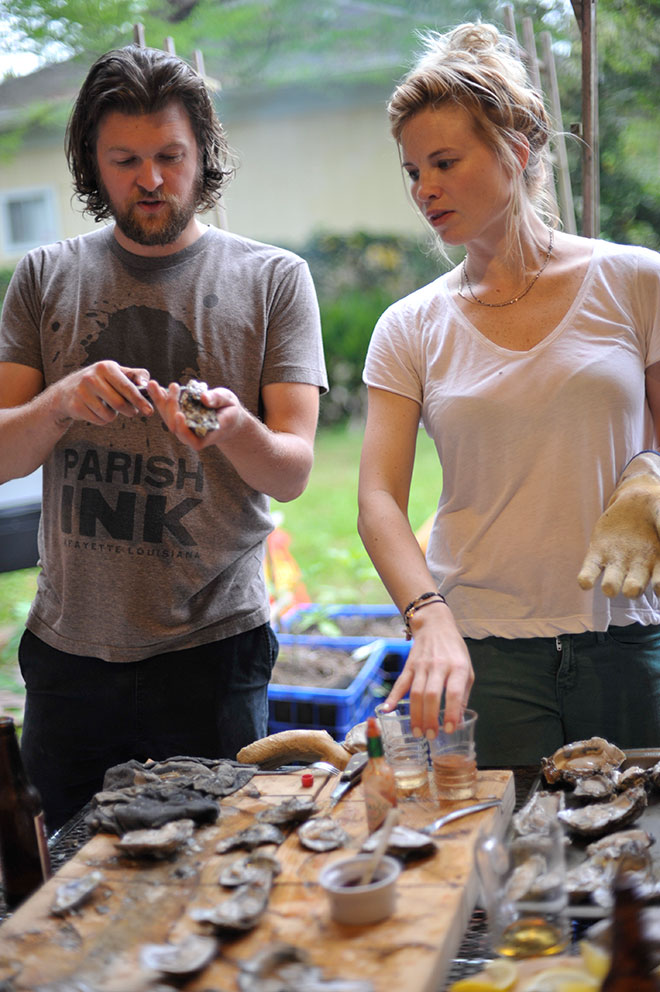 Denny and Katie shuck oysters in the back yard of their Downtown home.

How many chefs does it take to transform the award-winning cuisine of Acadiana into a culinary community that makes Lafayette a true Southern tourist destination?

It's a question that's probably best-suited for Denny and Katie Culbert, a Hub City couple on a mission to unite the culinary community in a way that drastically increases collaboration and lessens the overall sense of competition among chefs.

"Everyone needs to do well," Denny says. "We're looking to create community support."

That kind of community support - the kind that attracts foodies to cities like New Orleans, Charleston, S.C., and Asheville, N.C., - is the premise of Runaway Dish, their year old nonprofit organization that hosts pop-up dinners downtown and brings together numerous chefs and others in the local food world. 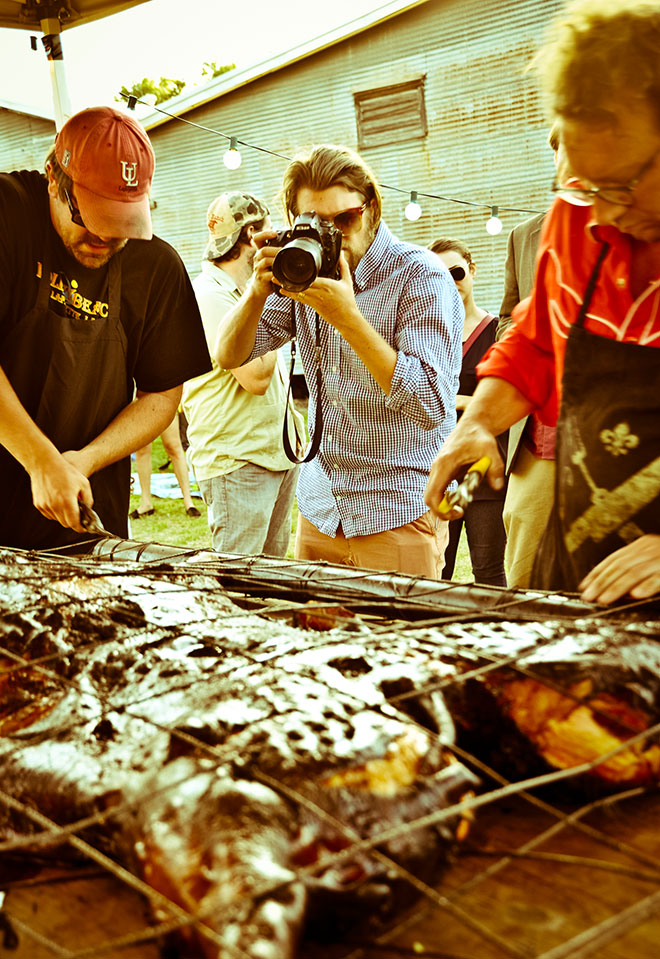 Denny captures "Janelle" before Jo Vidrine, left, and Bryan Kyzar free
her up for plates at Runaway Feast on April 22.

"We started this around a time when all these new chefs have come into the city and haven't been around each other that long," Katie says. "A lot of new talent has emerged over the past 10 years, and they're so passionate about what they do. A lot of other things have fueled this movement, like farmers markets, but before it was all competitive. Now it's more about collaboration."

Denny, who earned his bachelor's degree in photojournalism at Ohio University, grew up in northern Ohio and moved to Louisiana in 2008 as an intern for The Advocate in Baton Rouge. He moved to Lafayette later the same year and started a three-year stint as a photographer for The Daily Advertiser.

While at the Advertiser, Denny began a monthly food column called "Dishing it Out," which featured a 10-question interview with a local restaurant owner and an accompanying photo essay.

"I would go and hang out at locally owned restaurants to get to know the community better," Denny recalls. "I liked hanging out in restaurants, [and] in [their] kitchens."

Denny left the Advertiser in 2011 to pursue freelance photography. That fall, he was hired by the Southern Foodways Alliance to spend a month living in an RV in North Carolina - the BBQ bus - and documenting BBQ culture full-time.

He returned to the BBQ bus in the fall of 2012, this time in South Carolina, and from there his work evolved into 90 percent food photography.

Katie was born and raised in Lafayette and studied business at Tulane University in New Orleans. She worked in finance for a while after Tulane, but returned home from San Diego to help run kiki, the River Ranch boutique opened by her mother, Kiki Frayard.

It was Denny's extensive work in the food community that also piqued Katie's interest, she says.

"He was getting heavily involved in food," Katie recalls. "I loved to cook, I had chef friends, and I love to eat, so it kind of turned into this thing that was more than just a hobby."

The couple attended a four-day Southern Foodways Alliance symposium in Oxford, Miss., and came back "on a total high."

"It opened up our eyes to this whole world," Katie says. "It's much more than just eating. Chefs are passionate about growing food and how they prepare it."

After the Oxford symposium, the couple traveled with The French Press' Justin Girouard and New Orleans chef Justin Devillier of La Petite Grocery to Asheville, N.C., for Blind Pig, a monthly charity dinner. There, the two Louisiana chefs joined Asheville chef Adam Bannasch of Zambra. (All three culinary experts worked for Stella in New Orleans at one point in their careers.)

Katie describes Asheville as a city that's comparable in size to Lafayette, but with "a greater sense of community" among local chefs and restaurants.

"We have just as much talent, just not as much connection between each other," Katie says.

Local chefs and their staffs plate desserts for the premiere Runaway Dish.

The charity dinner and culinary cohesion they witnessed in North Carolina loosely served as a model for what the Culberts have created in Lafayette through Runaway Dish.

"That's what we were looking for with Runaway Dish, was to build that sense of community," Denny says. "It amazed me that none of the chefs really knew each other here. They had opinions of other chefs, but they didn't hang out. At other charity functions they showed up, did their thing and left. We just wanted to create community and opportunities for them to be together."

The first Runaway Dish was held in April 2013 during the week of Festival International. The two chefs for the Runaway Dish debut were Girouard from The French Press and Social's Marc Krampe, both of whom were already friends with Denny and Katie.

Runaway Dish's premiere was held downtown with a kitchen set up in the back parking lot. The couple crafted a guest list of 60 people at $150 per person and essentially "threw together a pop-up restaurant for one night," Katie says.

"It was amazing to watch," Denny says. "An hour before diners were supposed to be there, and chefs weren't really there yet. They just swooped in and made this amazing meal. We've learned to trust our chefs quite a bit."

Café Vermilionville Executive Chef Pat Waters, who took part in the second Runaway Dish, says thanks to Denny and Katie, local foodies and chefs are becoming more like a small family in which every member is happy to lend a helping hand.

"In every discipline, there are the artists that are actually performing and producing the art, but if there aren't the right people that truly adore and appreciate that art form, then that art can go unnoticed in vain." - Toby Rodriguez of Lache Pas Boucherie et Cuisine

"It was very different before Denny and Katie," Waters says. "Chefs knew each other, but they weren't really helping each other out. Now there's a nice group of us coming together. That hasn't happened anywhere in quite some time."

By the third dinner, the local culinary community was lining up at the door to help, but also to learn from each other, Denny says.

"We let [chefs] focus on the food and not have them worry about little details," Katie says. "The reason we started this was to get all the chefs in a room together. A year ago that hadn't happened."

It was at the third Runaway Dish that the Culberts connected with boucherie pro Toby Rodriguez with Lache Pas Boucherie et Cuisine. Before meeting the Culberts, Rodriguez says he mostly did boucheries for parties, special events and television shows, events Katie and Denny describe as "the ultimate farm-to-table experience - involving the farmer, picking out the pig and using the entire pig."

The Culberts then helped Rodriguez corral a group of mostly younger Lafayette chefs to Vermilionville, where he and his crew organized a sort of retreat for chefs and gave them a hands-on lesson in the art of the boucherie.

"Most of them work with this meat the majority of their lives, but when you've been in a kitchen for years it just becomes material, a product," Rodriguez explains. "When you take a chef and show them where his product comes from, then they develop an appreciation for it."

From there, the Culberts teamed up with Rodriguez to bring 20-25 Lafayette chefs to New Orleans to work directly with 25 chefs from the Big Easy for another boucherie teaching experience in late March.

For the Culberts, it was the perfect opportunity to highlight the educational side of their mission and to begin "building bridges a little across the state," as the couple plans to pair a Lafayette chef and a New Orleans chef for a future Runaway Dish. The two chefs will host one dinner in Lafayette and one in New Orleans.

"I think there are just more opportunities in New Orleans for chefs to come together," Denny says. "They're more advanced in that aspect. A lot of the chefs in Lafayette are really young, and not all the chefs we work with in Lafayette are chef-owners." 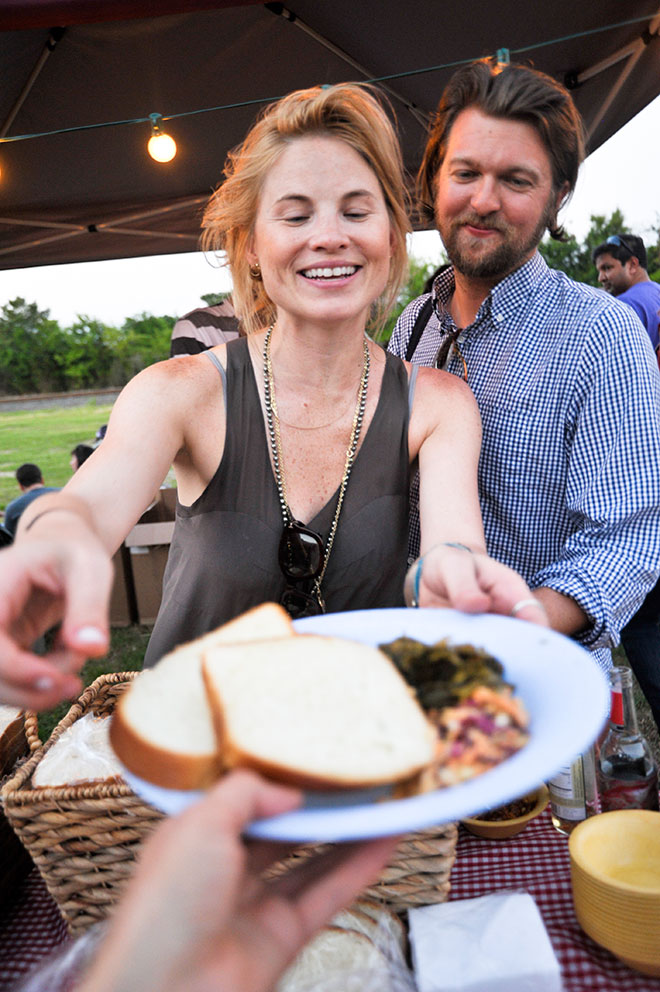 Rodriguez says events like Runaway Butcher and Runaway Dish "give everyone an important voice, and everyone the opportunity for creative input."

"The entire Runaway Dish experience has been amazing, collaborating and working with other chefs to the extent where there are no egos involved," Rodriguez says.

Runaway Dish has expanded since its inception to include a food journal the couple publishes in between dinners. The magazine is teeming with photos of previous Runaway Dish dinners and also spotlights stories from contributing writers.

Sales from the journal help to cover the cost of Runaway Dish dinners, as well as the cost of printing the magazine.

Of the four dinners Runaway Dish has hosted, three of them raised money for local charities, with Louisiana Folk Roots, the Lafayette Children's Museum and the Acadiana Center for the Arts' artist-in-residency program all benefiting from the program. Each nonprofit received between $2,200 and $3,000.

Katie and Denny hope to expand their charitable reach to eventually award two grants per year, perhaps one to a farmer and one to a chef for advanced studies in their respective fields.

"Things have changed so much in the last year, and not just with Runaway Dish," Denny says. "The chefs are seeing each other at the farmers markets on Saturdays, and people are definitely thinking more locally."

Although the Culberts attribute the success of Runaway Dish to "good timing," Rodriguez says like many food artisans in the area, he feels indebted to the Culberts. Meeting Katie and Denny, he says, "has changed my involvement in the culinary community completely."

"In every discipline, there are the artists that are actually performing and producing the art, but if there aren't the right people that truly adore and appreciate that art form, then that art can go unnoticed in vain," Rodriguez says. "Katie and Denny are like the mortar between the bricks as far as food goes. They believe in it, and spend a lot of time and effort in bringing it to the Lafayette foodies. Looking over the grand scheme of things, I'm looking forward to seeing where they are five, 10 years down the road and how Lafayette can benefit from their involvement in the culinary community."

When the Dish is a Feast 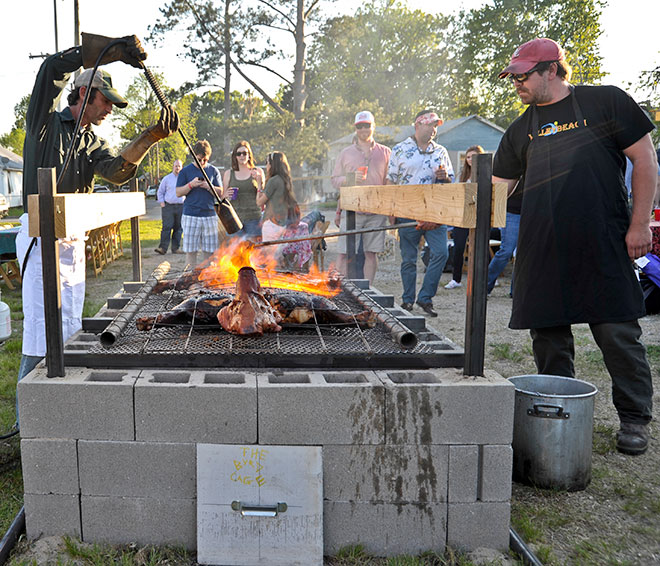 Toby Rodriguez, left, a mobile boucherie expert, tends to the guest of honor, "Janelle," while Jo Vidrine sauces her up.

On April 22, Runaway Dish's Denny and Katie Culbert presented a special guerrilla dining event dubbed Runaway Feast at the warehouse on Garfield Street owned and hosted by Mark Falgout of the Blue Moon Saloon. Like the Runaway Dish events, the Feast Frankenstein's badass local chefs and skillet warriors came together at a surprise location for a worthy nonprofit cause. In this case, the chefs barbecued a pig from Eunice named "Janelle," and all ticket sales benefitted Festival International.

Unlike Runaway Dish, which is a bit pricey and stuffier, Runaway Feast is only $35 a ticket and embraces a casual attitude and dress code. Indeed, at this event, there was a profound lack of Mephistophelean, leather-heeled yuppies and more "chill people" casually sporting a spectral array of regular-Joe T-shirts, flip-flops and cheap shades constructed of imported plastics, who contemplatively grooved to the rhinestone folk of Cat Head & the Biscuit Rambling Playboys and later Soul Creole.

"We started Runaway Dish one year ago," says Katie Culbert. "We do them four times a year. But Runaway Feast is our new concept where it's more like a picnic - $35 for a ticket, very accessible."