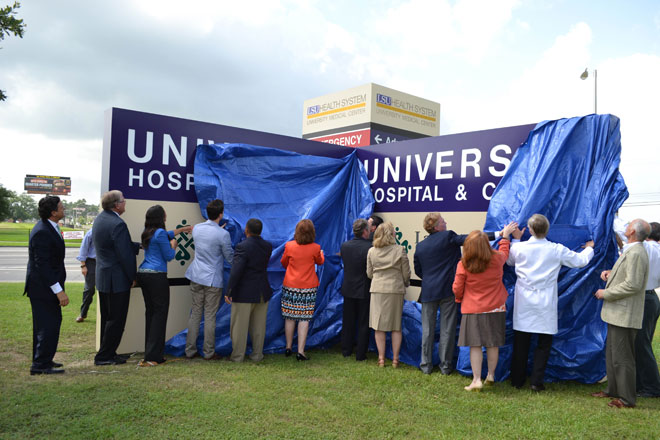 The U.S. Centers for Medicare and Medicaid Services has rejected Gov. Bobby Jindal's privatization plans for six state-run hospitals, including the former UMC in Lafayette, in which a contract has already been executed and the name of the facility changed.

Federal officials on Friday rejected financing plans by Gov. Bobby Jindal's administration on deals to privatize six state-run hospitals that care for the state's poor and uninsured, a decision that threatens contracts like the one in Lafayette that already have been used to turn over hospital management.

CMS gave the state health department 60 days to file an appeal of its decision, but Jindal has already confirmed he will appeal.

In a statement, the Republican governor said the U.S. Centers for Medicare and Medicaid Services "has no legal basis for this decision."

In addition to Lafayette, the rejections involved plans for other LSU-run hospitals in New Orleans, Houma, Lake Charles, Shreveport and Monroe.

CMS notified the state health department that it refused to sign off on the plans. The federal agency told the Jindal administration that the deals don't meet federal guidelines governing how Medicaid dollars can be spent. "To maintain the fiscal integrity of the Medicaid program, CMS is unable to approve the state plan amendment request made by Louisiana," the federal agency said in a statement. "We look forward to continuing to work with the state to ensure Louisianans receive high quality Medicaid coverage."

The decision could create massive upheaval in the state's budget.

Jindal didn't wait for federal approval before he shifted the hospital management, so the hospitals are now operating under financing plans that have been rejected after being used to balance Louisiana's budget. The budget was balanced assuming that hundreds of millions of dollars of federal funding would flow into the hospitals.

Jindal, however, said there would be no short-term impact on the budget, because the state will appeal.

Privatization deals for the New Orleans, Lafayette and Houma hospitals took effect in June, and the Shreveport and Monroe facilities have been under outside management since October. The Lake Charles hospital was closed, its services shifted to a nearby private hospital.

Lawmakers have worried about the possibility of rejection since the transfers began, but the Jindal administration refused to slow the efforts, expressing repeated confidence that the agreements would win federal support.

Jindal's health secretary Kathy Kliebert reasserted her confidence as recently as last week in a meeting with lawmakers.

Privatization deals have taken effect for eight university hospitals and their clinics, with one more pending. They were pushed by Jindal as a way to cut state costs, improve care for the poor and uninsured, and bolster medical training programs.

The deals are costing the state $1.1 billion this budget year, much of it relying on the expected federal health care dollars. The six hospital deals denied Friday were estimated to cost $882 million in the current budget year, most of that assumed to be covered through federal funds.

But only one contractual arrangement has received federal approval, a deal that shuttered LSU's Earl K. Long Medical Center in Baton Rouge and transferred most of its inpatient services to a private hospital, Our Lady of the Lake Regional Medical Center.